SummerSlam weekend in Toronto just got even more international with the announcement that the Chinese promotion, Oriental Wrestling Entertainment, will be running its first shows outside its home market.

The OWE shows are a partnership between the Shanghai-based company and the Toronto-based Smash Wrestling. 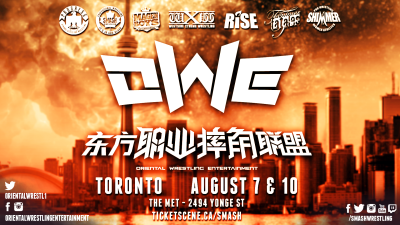 Michael Nee, a vice-president of OWE, was in Las Vegas with OWE talent the Strong Hearts — CIMA, T-Hawk, and El Lindaman — and stopped in Toronto on his way back to China, and arranged the deal with Smash boss Sebastian Suave on Wednesday night.

While waiting for his flight home, Nee talked with SLAM! Wrestling about the two shows in Toronto.

Nee said that the investors behind OWE encouraged the shows, and looked at the United Kingdom, Taiwan, Japan, the United States, and Canada.

“The main goal for us [is] to explore the new market,” said Nee, calling it an “opportunity to show to people around the world what we have.”

OWE has been around a little more than two years. Many North American fans first heard about it recently when the newly-launched All Elite Wrestling announced a partnership with the Chinese promotion. The Strong Hearts lost in their six-man tag at Saturday’s Double or Nothing pay-per-view. OWE also has deals with the Mexican Crash Lucha Libre promotion, Smash Wrestling in Canada, and at one time, worked with Dragon Gate in Japan.

“Honestly, if anyone is interested in where wrestling is at in 2019 and moving forward, they’ve had their eyes on OWE once AEW announced a partnership with them,” said Suave. “And anyone doing even the slightest of homework has to see what they’ve been able to do at a high level in a short period of time. So clearly, they have the right people in the right places.”

In China, professional wrestling is very new, and due to government control, it is necessarily different than what many fans currently know. It has a little more of a “kung fu” feel rather than a violent crash-bang wrestling feel.

“We try hard for people in China to know us,” said Nee. “It’s a new market and the people don’t know what wrestling is … We need to find a way out before the China market becomes educated.” 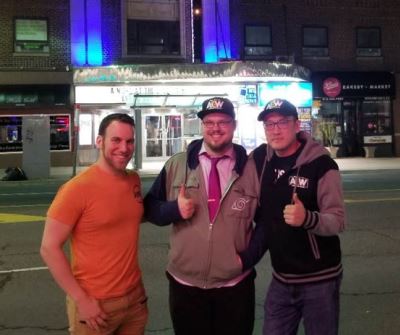 Smash Wrestling’s Sebastian Suave, blogger NuclearConvoy, and Michael Nee of OWE across the street from The Met, where OWE will be promoting its two shows in Toronto in August. Twitter photo

A dojo was set up to train Chinese talent, and the three grapplers that appeared on the AEW show under the OWE banner, CIMA, T-Hawk, and El Lindaman, are all involved in teaching wrestling skills.

Wrestlers are brought in as guests, as Winnipeg’s Tyler Colton recently was. “So the more time I spend with the young Chinese wrestlers, the more I’m realizing they know nothing, like literally almost nothing, about wrestling besides what’s currently on TV,” he posted on Facebook on May 24. Colton felt it was part of his job to educate them on wrestlers from the past, and was working “to compile a list of essential wrestlers for them to learn about.”

Nee concedes that the inexperience is part of the challenge, and part of his concern when deciding which talent will be coming over to Toronto in August. “Our talents are so young. Basically, the average is about 20 years old, and they have never gone to other places,” he said, explaining that many had come from small towns so the shock of living in a big city like Shanghai required an adjustment. A select few have traveled to Japan to wrestle.

Of course, Toronto’s a big city, and it has the second largest Chinatown in North America, after San Francisco. It’s a little like home, and Nee said he’s curious whether OWE can entice the locals.

“We don’t know how they will be so interested in us. We will see,” he said. “We also wanted to introduce to the fans that of the kung fu style wrestling, how that is, and introducing our new concept, ideas, of wrestling.”

A life-long resident of the greater Toronto area, Suave noted the Chinese market is a plus, but it wasn’t why he partnered up the two companies.

“That’s definitely a benefit but that’s not the reason on our end,” Suave said. “For them, I’m sure it’s a bonus. But they’re very ambitious about getting their product beyond the Chinese market.”

In all, Suave is looking after nine different shows during the days before and after WWE SummerSlam, all at The MET — The Midtown Event Theatre, at 2492 Yonge St., just north of Eglinton. Adding the two OWE shows — on Wednesday, August 7 at 4 p.m. and Saturday, August 10 @ 3 p.m. — are a huge get for him. Tickets go on sale Friday smash-wrestling.com.

Other shows include: a PROGRESS Wrestling show; a Smash Wrestling vs. Progress show; the German promotion wXw has a wrestling show; and wXw’s Ambition has a shoot style tournament; a Magen Boys Entertainment event; “The Summit” all women’s event (Shimmer, Rise, Femmes Fatales and Smash Wrestling collaboration); and Smash Wrestling’s Super Showdown 7 event. (WWE is running four straight shows at the Scotiabank Arena, NXT on Saturday, SummerSlam on Sunday, Raw on Monday and Smackdown on Tuesday.)

“What OWE is doing in China is truly special and they’re already going to be spreading across the world. I see this as an opportunity to work with fresh talent,” said Suave. “And, after meeting Michael, I’m equally excited to be working with a group of ambitious and high-quality people.”