Best of the Super Jrs. Night 11: Takagi and Ishimori in the A Block finals 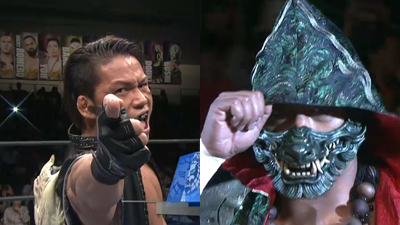 It will be The Dragon versus The Bone Soldier.

Shingo Takagi and Taiji Ishimori will face-off to determine who will be the A Block winner this Friday.

Los Ingobernables de Japon’s Takagi win over Jonathan Gresham today puts him at 16 points. No one has been able to break his undefeated streak. Despite wrestling a decent tournament, Gresham couldn’t find a counter for The Dragon’s incredible strength. Gresham kicked out of the Noshigami and the Dragon powered out of Gresham’s Octopus hold hoisting him into Last of the Dragon.

The veteran Tiger Mask gave Bullet Club’s Ishimori a difficult time. Two successive knee strikes and a Yes Lock had Tiger Mask tapping out. Ishimori remains two points behind Takagi while Tiger Mask has only one two matches heading into his final match of the tournament against Titan.

Sho refuses to submit to an arm bar. It takes a piledriver and a Shock Arrow for Sho to score his fourth win. He will take on Jonathan Gresham in their last match of the Super Juniors 2019.

Taichi leaves commentary, interferes in the match by pulling the official out of the ring. Kanemaru pulls off Dragon Lee’s mask. Dragon Lee covers his face with his hands drop kicking Kanemaru before he can spit whiskey. Lee retrieves his mask and puts it back on. Kanemaru cannot pin Lee with a moonsault from the top rope. Lee turns a Deep Impact into a Desnucadora. Dragon Lee drop kicks Taichi off the apron. The crowd cheers. A running knee strike and another Desnucadora wins the match for Dragon Lee.