Fans of professional wrestling have endured a lot for their passion:

“Why do you watch that? Don’t you know it’s fake?”

“You are a wrestling fan? But you have all your teeth?”

And for the record, yes both of those statements were really said to me when I revealed myself as a wrestling fan. But I digress.

Fellow wrestling fans, your day of reckoning is here. Co-authors, Darren Paltrowitz and D.X. Ferris have come up with the ultimate comeuppance to justify your love for the squared circle with their book: Good Advice From Professional Wrestling: Full Contact Life Lessons From the Pinnacle Performance Art.

The idea for this unique self-help book came after Paltrowitz, an entertainment professional, writer and wrestling fan, met Ferris when he interviewed him about his previous book, Good Advice From Goodfellas (the Martin Scorsese mob flick). 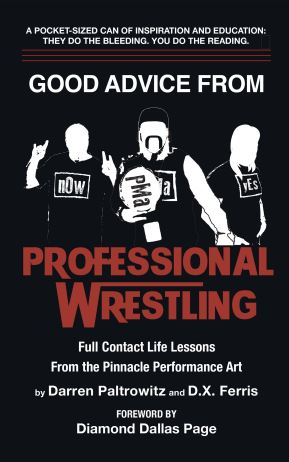 “We hit it off,” recalled the 37-year-old Paltrowitz in a phone interview from his home in Long Beach, Long Island. “He (Ferris) ended up quoting DDP (Diamond Dallas Page) unsolicited and I went, ‘Wait, wait, you’re a wrestling fan?’ And you know a lot of people just don’t want to outwardly admit to being wrestling fans and you know he copped to it, we spoke, stayed in touch. And I said, ‘Did you ever think about doing this with wrestling? ‘And he was into the idea and somehow we started the book in November (2018) and somehow got it out in time for WrestleMania.”

The book, published by 6623 Press and not affiliated with any pro wrestling promotions, contains two main sections: On Aspiration and Success and On Wrestling. Each section has quotes from a variety of wrestlers and wrestling personalities, mixing legends like “Macho Man” Randy Savage and Ric Flair with more current talent such as Salina de la Renta and The Young Bucks. The quotes are then explored and applied to achieving real life success.

Case in point, most of us are familiar with this quote from Flair: “To be the man, you’ve got to beat the man.” After some background information on Flair, the authors analyze the quote further by writing: “Are you the one everybody looks to? If you are not, what is getting in the way of that happening? Who is in the way? Is it you? Are you the problem? Are you The Man?”

Each quote featured follows this format allowing readers to choose to get through the material easily all at once or going the daily affirmation route by reading the section on one quote per day. The book also contains a Locker Room section which features a list of 10 Things Successful Wrestlers Do That You Can Do and a list of Paltrowitz’s and Ferris’ top 10 favorite wrestlers. For this writer/reader, the favorite wrestler sections came off as a tad unnecessary and self-indulgent, but they are a fun read nonetheless.

Paltrowitz explained that gathering the quotes for the book was “a mixed process.” He relied on interviews he had previously conducted (he estimates that he writes 10-15 articles a week with 10-15 per cent of his writing being wrestling related. He is also the host of The Paltrocast with Darren Paltrowitz podcast) and further researched famous pro wrestling quotes. There was also the method of wondering if (insert any professional wrestler here) had “ever said anything really brilliant.” Ferris, being from Pittsburgh, had only one demand — that they include quotes from Bruno Sammartino and Kurt Angle, joked Paltrowitz.

There was one part of the book writing process that was easy, if not obvious, for the two writers: choosing who would write the Foreword. It was unanimous, it had to be the prince of positivity himself, Diamond Dallas Page. Paltrowitz had gotten to know Page after interviewing him several times and both he and Ferris are devotees of Page’s workout and exercise enterprise, DDP Yoga. Ferris has even shed 40 pounds using the infamous program.

“Wrestling prepared me for change,” wrote Page in the book’s foreword. “Wrestling teaches you how to meet challenges head-on. Wrestling has a lot to offer, even if you watch at home. That’s where I started too. I am proud of how far the wrestling business has come in recent years. So many of my brothers and sisters have also found success outside of the ring as business owners and performers in other industries. They have helped eliminate so many of the stigmas that were associated with professional wrestling from way back when.”

Like Page, Paltrowitz is ever-positive about the book. He has no time for those who would scoff at the notion that professional wrestling is capable of inspiration.

“Wrestling has always been picked on and its always been belittled and undeservingly so,” observed Paltrowitz. “So, you know this book is not for the people that judge it by its cover. This book is for not only just wrestling fans and not just for people who are looking for great advice that they can apply to business and all facets of their life, it’s for people who are also looking for quick bathroom reading. It checks all kinds of boxes and it’s definitely a self-help book for people who don’t read self-help. It’s its own animal.”

Paltrowitz concluded enthusiastically, “The bottom line is it’s the best time in history to be a wrestling fan now! Better than ever! There’s more content than ever! There’s more talent than ever! So hopefully people that read this can take something away from the self-help aspect. They can be a little entertained. They can remember the legends of yesteryear, but also look at the talents of today. Really there’s something for everyone in this book.”