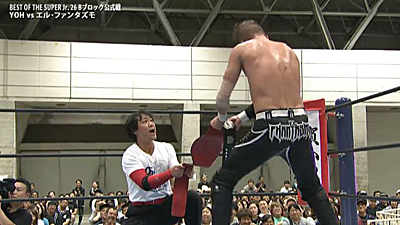 On day ten of the Best of the Super Juniors, Canadian El Phantasmo experienced his second loss of the tournament. He surrendered his lead in B Block which he now shares with three other opponents. Phantasmo is tied at 10 points with Robbie Eagles, Ryusuke Taguchi and Will Ospreay.

Once he takes off his Bullet Club shirt the crowd can see that El Phantasmo’s arm is taped up due to his encounter with Rocky Romero the other night. Tonight, El Phantasmo is taking on another member of Roppongi 3K in Yoh. Phantasmo doesn’t wait for the bell. He runs across the ring kicking Yoh squarely in the chops. Yoh rolls out of the ring. Phantasmo gives chase not even allowing Yoh to take off his jacket or unbuckle the IWGP Junior Heavyweight Tag Team Championship belt. Once he rips it off, Phantasmo spits on the belt. Red Shoes surprisingly calls for the match to start while Phantasmo is punching Yoh on the floor.

Phantasmo slams a ringside barrier onto a fallen Yoh. Fumbling under the ring for an illegal weapon Phantasmo finds a shoe and hammers Yoh with it. Phantasmo throws it at Yoh while he stumbles away. A suplex on the concrete floor rearranges Yoh’s spine. Phantasmo whips Yoh into about five rows of chairs.

Yoh makes a comeback attacking the bandaged arm. Phantasmo starts playing around with Yoh slapping him in the head, putting his knee over his throat then posing for the crowd and even reclining in a corner as he waits for Yoh to get back to his feet following a whip into a turnbuckle. Yoh takes advantage of the cockiness by German suplexing Phantasmo as he himself is hung up on the Tree of Woe.

Yoh evades the CR2 by back-dropping Phantasmo over the top rope. Phantasmo shoves Yoh into Red Shoes. While Red Shoes is out, he slides out of the ring retrieving his RPW British Cruiserweight Championship belt. He is about to clobber Yoh with it, however, Red Shoes catches him. Red Shoes wins the tug of war. Yoh sneaks up on Phantasmo rolling him up for the win.

The Makuhari Messe International Conference Hall hadn’t seen the last of Phantasmo tonight though. During Will Ospreay’s match against Bullet Club member Robbie Eagles, Eagles was pushed into Red Shoes by Ospreay. Phantasmo appeared and clobbered Ospreay with a steel chair. Phantasmo shouted at a reluctant Eagle to finish Ospreay off. With two minutes remaining Ospreay submits to Eagles. Eagles is visibly displeased with getting a win in that way. Eagles refuses to too sweet ELP.

Over in A Block, Shingo Takagi, the dragon of Los Ingobernables de Japon, expanded his lead by two points over Taiji Ishimori who is in second and four points over Dragon Lee who is in a distant third place.

Shingo Takagi preserved his undefeated streak against the veteran Tiger Mask. Tiger Mask came close to beating Takagi. He reversed a Pumping Bomber into a crucifix and an arm bar. Shingo absorbed a flurry of stiff kicks from Tiger Mask. Two Pumping Bombers in a row cannot Tiger Mask away. Last of the Dragon does though.

The tournament has only five days remaining as it ends on June 5th. The winner receives a title match against whoever is the IWGP Junior Heavyweight Champion. At present the belt is held by Dragon Lee.

Poor Narita, he doesn’t have a single win to his credit even though he has had a strong tournament. Taguchi makes Narita submit to the ankle lock.

Gresham and Kanemaru roll around in a cradle so long that Kanemaru is drop kicking thin air. Gresham clamps on the Octopus just as Kanemaru is about to hit him with the whiskey bottle. Kanemaru submits giving Gresham another in a string of wins. Gresham takes a swig of Kanemaru’s whiskey. He immediately spits it out.

Romero is coming on strong lately. Douki injures his arm on one of the ring posts. Douki submits to the cross-arm breaker.

Titan cannot kick out of a rebound lariat, a package DDT and a Black Plague. Scurll promises Kevin Kelly that he will win back his IWGP Junior Heavyweight Championship.

Bushi DDTs Bandido on the ring apron. A follow-up neckbreaker gets a two count. Bandido evades a running MX. He eats a Canadian Destroyer and a MX though.

Ishimori twists a Shock Arrow into a Bloody Cross for the win.