Like so many fans of The Attitude Era, I remember exactly where I was when Owen Hart died, 20 years ago today.

I wasn’t watching the Over The Edge pay-per-view where he tragically plunged to his death. That I missed the show was, in itself, unusual, as I would religiously watch the WWF’s monthly PPV offering. But on the night in question, I was attending my best friend’s wedding and figured I’d find out who won the matches later. 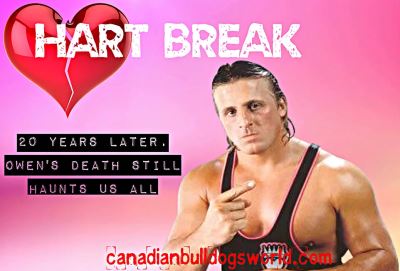 Oddly enough, I had a conversation with another wrestling fan at the wedding, about The Blue Blazer’s scheduled match against The Godfather. There was a rumor going around at the time that The Blazer would be, for that night only, ECW’s Shane Douglas. Lord only knows where that story came from.

After a fantastic wedding, I came home and went to sleep, completely unaware that the wrestling world changed forever.

The next morning, a friend of my then-wife called to ask if I’d heard the news about Owen Hart. Clearly I hadn’t, and as soon as she conveyed the terrible news to me, I ran outside my building to find a newspaper (this was back in the days when newspapers were readily available on every street corner) and confirmed what the wrestling world already knew: Owen died after a stunt had gone horribly, horribly wrong.

Not that there’s such a thing as a “typical wrestling death”…. but this was as far from typical as one could imagine. I’d followed Owen’s career since his days in the Calgary Stampede territory, where he did high-flying moves seemingly no one else could pull off. I watched him debut in the WWF as The Blue Blazer where, despite having the technical requirements to succeed, he never got past a Jobber To The Stars status. I saw him return to the company years later, first in middling-at-best tag teams with Jim Neidhart and Koko B. Ware, and then in the family feud to end all family feuds with his older brother Bret Hart. 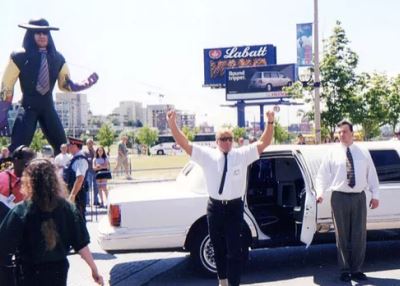 I actually had the opportunity to meet Owen Hart – twice, in fact. The first time was at a WWF press conference in 1998 (pictured above) where he took time to graciously answer questions to members of the media (including myself, though my credentials back then were a little sketchier than most reporters). I lined up to ask him a few questions and, quite honestly, I don’t remember what we even discussed — I was just thrilled to be interviewing one of my favorite wrestlers.

The second time was a similar press junket and, while I didn’t ask him a specific question that time, he entered the room, patted me on the shoulder, smiled and said something along the lines of “Hey! How ya doin’?” as though he somehow remembered me from months earlier. Of course, there’s no way he could have possibly remembered me…. but even the gesture was one I’d never forget.

Months later, Owen Hart was gone. That helps explain why his passing was so painful for me personally, but what about other wrestling fans? Why is Owen Hart’s remembered so clearly 20 years later, when there have been far too many wrestler deaths (and of arguably bigger names) since that time?

The way Owen passed away was certainly memorable. So few wrestlers have died in the ring (Mexico’s Silver King being a recent unfortunate example), but even then, it was following some sort of in-ring action. Not so here, where Owen was simply doing what was asked of him, rappeling from the ceiling in a (seriously) pointless stunt, and doing so despite having significant reservations about it.

On a lighter note… I would also argue that Owen’s subtle sense of humor helped him cement his legacy. In an industry where few wrestlers are actually “funny,” Owen exceeded expectations. Take, for example, his two Slammy Awards (one of which he actually didn’t win); the fake tears he mustered up during a reunion of The Hart Foundation, or the impromptu way he threw a pitcher of drinks at Vader in the clip below, prompting both Vader and Vince McMahon to laugh.

My favorite funny Owen Hart moment is one I can’t find online, but I clearly remember it happening shortly before his passing. At the time, Owen (not Shane Douglas) was moonlighting as The Blue Blazer after being forced to retire. Ken Shamrock was frantically looking for someone backstage (it may have been Steve Blackman) when he happened upon Owen in a locker room. When Shamrock asked if he’d seen Blackman, Owen deadpanned “Don’t ask me; I’m retired.”

And that’s speaking nothing of the tremendous ribs he pulled on all the boys on the road…. something we only learned about it after his death.

At the end of the day, Owen was (by all accounts) an exceedingly nice guy, a tremendous wrestler and a very funny person besides. When he passed away in 1999, it not only tore apart his own family (one of the most prominent families in wrestling), but it visibly saddened fans around the world.

That may be why, 20 years later, Owen’s death still haunts us all. 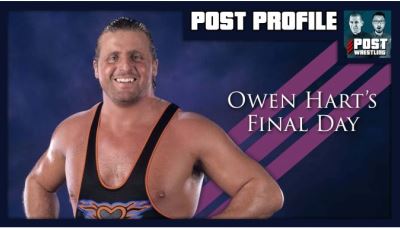 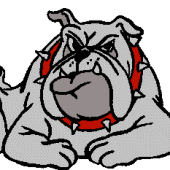