Best of the Super Jrs. Night Eight: Michinoku, Narita, Douki out of the running, Takagi and Phantasmo widen their leads 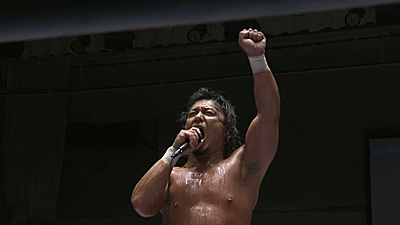 Night eight of the Best of the Super Jrs. saw some competitors fall by the wayside while the leaders surged ahead.

Due to their losses, Taka Michinoku, Ren Narita and Douki have no mathematical chance of winning and are essentially out of the tournament.

A Block leader Shingo Takagi and B Block leader El Phantasmo walked away with 10 points each and the number one position in their respective divisions.

For Shingo Takagi it was a clash of styles as he took on the high flying Dragon Lee. Lee’s speed and agility were no match though for Shingo’s endurance and strength. Even with the full support of Korakuen Hall, Dragon Lee threw everything he had at The Dragon of Los Ingobernables de Japon but he could not keep him down. A Last of the Dragon secured Shingo’s spot at the top of A Block.

El Phantasmo had an easier time extending his lead since he faced Young Lion Ren Narita. After the final bell, Phantasmo gave Narita a CR2 and tea bagged him with an ice pack. He also took a fan’s hat and threw it away.

“I would like to hit him with a Pulp Friction or two,” said Juice Robinson at the commentary desk.

Titan pins Taka with an awkward cover. Titan’s victory ends any chance Taka would have at winning the tournament. Heading to the back, Taka told announcer Kevin Kelly “I hate Lucha libre.”

Bushi notches another impressive win pushing him ahead to tie with Bandido for fourth place in B Block. If you are interested in hearing about Robbie Eagles and the wrestling scene in Australia check out the NJPW podcast here.

Like Bushi, Gresham is on fire stringing together some victories. Here, he defeats the veteran Tiger Mask with a solid roll-up. Tiger Mask just got out wrestled. Gresham tackles and hugs the official. Tiger Mask shakes Gresham’s hand and bows to him.

Yoh breaks out of the Suplex de la Luna, super kicks Douki in the face pinning him with a Fishermen’s Suplex. Douki has no hope of winning the tournament now.

Scurll comes to the ring limping. Brody King is concerned for his pal. It is all a ruse. Scurll attacks Sho with his umbrella before the bell rings. Sho would put away Scurll with Shock Arrow.

Romero counters Taguchi with a roll-up. The two keep rolling back and forth until Taguchi gets the final roll-up. If Romero loses his next match, which is against El Phantasmo, he is out of the tournament.

Will Ospreay Versus Bandido

In an incredible match, Ospreay catches Bandido in a dive, flips him into a Storm Breaker.