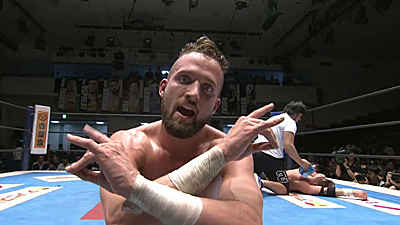 It was a lucky seventh night of the Best of the Super Jrs 2019 for NJPW fans as it had none of those tag team filler matches. It was all singles tournament matches and at the end of the night it was Canadian El Phantasmo leading B Block.

It was no easy night for the Vancouver native either. He faced his toughest challenge yet in the ‘Ariel Assassin’ Will Ospreay.

Ospreay jump-started things with a shotgun drop kick that knocked Phantasmo clear out of the ring. Ospreay followed up with some punches on the floor. He whipped Phantasmo into the first five rows of seats, snatched up a steel chair throwing it at him. As Phantasmo lay stunned on the floor, Ospreay laid in kick after kick and punch after punch while fans scattered in every direction.

Ospreay rolled Phantasmo back into the ring. Phantasmo promptly rolled back out the other side. Ospreay leapt onto Phantasmo knocking him into the third row. The fans cheered for Ospreay.

Phantasmo retreated up the stairs heading towards a mezzanine area. Phantasmo begged off as Ospreay cornered him. Phantasmo escaped Ospreay’s clutches, scampered up a raised entrance way, moonsaulted onto Ospreay. The momentum took Phantasmo into several rows of seats.

As Red Shoes warned both wrestlers to get back into the ring, Phantasmo kicked Ospreay down the stairs, spat a drink in his face and super kicked him. Phantasmo sprung off a barricade clocking Ospreay with a flying forearm. Phantasmo too sweeted a fan only to flip them off.

Ospreay put an end to the shellacking by blocking a kick and chopping Phantasmo in the chest. Phantasmo hit back with rapid fire chops. Phantasmo walked the ropes around two sides of the ring before whipping Ospreay over.

Phantasmo tore into Ospreay’s neck and that angered the Englishman. Ospreay bounced off the ropes kicking Phantasmo in the head. Ospreay swept Phantasmo’s legs, blasted him with a running drop kick and almost got the three with a standing shooting star press.

Phantasmo argued with Red Shoes about a two count. He shoved Red Shoes into a corner. The crowd peppered Phantasmo with boos. Red Shoes pushed Phantasmo back knocking him on his rear end.

Phantasmo will not go quietly. He kicked out of a shooting star press from the top rope. He hooked his legs around Red Shoes’ head to block Storm Breaker. A low blow and a roll-up almost pinned Ospreay. A few seconds later, a CR2 (Canadian Revolution 2) would.

The win over Ospreay gives Phantasmo 8 points putting him in top spot in B Block. Phantasmo has wrestled four matches in the tournament thus far and won them all defeating Ospreay, Bandido, Bushi and Robbie Eagles.

“Oh, now you want to cheer for me?” said Phantasmo as the fans shouted…ELP! ELP!

“If you are wearing an LIJ, Chaos or New Japan hat take it off right now! Get up off those chairs and go buy a Bullet Club hat because I promise you Best of the Super Jrs is coming to the Headbang Club,” Phantasmo promised.

Michinoku remains at zero points. Ishimori’s Bloody Cross makes sure of that.

Narita puts up a decent fight. Bandido pins him though with the 24 Plex.

Gresham is on a roll. He makes Titan tap out to the Octopus Stretch on the mat. Gresham moves into third overall in A Block.

If anything, this tournament has shown how truly amazing Rocky Romero is. His two points don’t reflect the fact that he has some of the best matches of the entire tournament. Romero submits to the Calf Crusher.

Dragon Lee moves to third in A Block by putting Tiger Mask away with a Desnucadora (vertical suplex powerbomb). It is Tiger Mask’s second consecutive loss.

Bushi pulls one over on Douki with a DDT over the ropes and into the ring apron. Bushi notches a convincing win with MX. It is Bushi’s first win of the tournament. He is tied for second last place in B Block with Douki and Rocky Romero.

Sho and Kanemaru fight into the crowd onto the rampways of Korakuen Hall. Sho gets thrown into one of the walls and suplexed on the concrete floor. Sho cannot make it back to the ring in time as Kanemaru pushes a Young Boy into him as the precious seconds tick down. Sho is counted out.

Eagles just won’t quit. He rolls up Taguchi for his first loss of the tournament.

From outside the ring, Brody King trips up Shingo. As the official admonishes King, Scurll smashes an umbrella over Shingo’s head. Shingo fights off the Crossface Chicken Wing but he is shoved into the official. Brody interferes giving Shingo a Stinger Splash and a Black Hole Slam. Shingo kicks out of The Villain’s powerbomb. As the official is knocked out, Scurll holds Shingo wide open for King. King clotheslines Scurll instead. King receives a Pumping Bomber. Scurll gets one as well. Shingo takes the match home with Last of the Dragon.