NEW YORK — The biggest weekend of the year for the professional wrestling world kicked off in a big way Thursday night.

A night full of hard hitting, high flying action mixed in with a healthy dose of surprises led to another successful edition of the WrestleCon Supershow.

This year’s show, the first of five events under the WrestleCon banner at the New York Hilton Midtown, tore the house down time and time again. 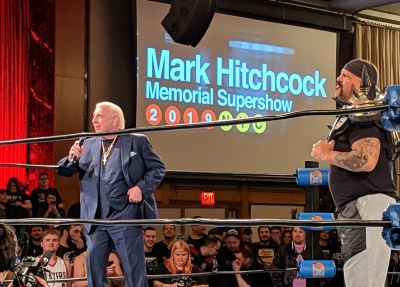 If expectations weren’t high going in, the opening of the show certainly set the stage for what was to come as Road Warrior Animal was introduced as the show’s ambassador. However, that wasn’t the big surprise, as Animal brought out Ric Flair much to the shock of the audience.

Flair talked about running with the Road Warriors in the 1980s and selling out buildings everywhere. He also choked up when talking about what this weekend means for he and his family, with his daughter, Charlotte Flair headlining WrestleMania 35 against Ronda Rousey and Becky Lynch.

From there, the action began. In the opener, Eddie Kingston received what he called a dream match in a losing effort against ECW veteran Masato Tanaka.

One of the big stories of WrestleMania weekend is the travels of the Lucha Bros, Rey Fenix and Pentagon Jr. This marked the first of three matches on the evening for the duo — however, after no tag teams answered their open challenge, they just decided to square off with each other. 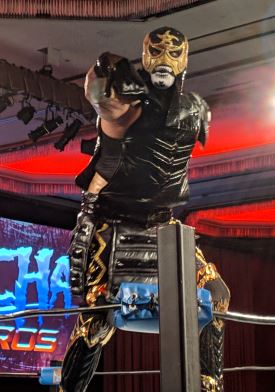 The crowd was behind both men, but Fenix got the win over his brother with a wild top rope Spanish fly.

Mixed tag team action with lucha rules was next as DJZ, Puma King, Samantha Heights and the returning Tajiri took on the “dream team” of Sammy Guevara and LAX (Santana, Ortiz and Diamanté).

This was all action, with the women equally involved with the men. Bodies were flying all over the place — including one moment where only the wily veteran Tajiri didn’t hit a dive. In the end, Tajiri hit the mist on Ortiz and got the duke.

The crowd absolutely ate up what came next, as the surprise trio of Justin “Thunder” Liger, X-Pac and Hurricane Helms knocked off the team of Caleb Konley, Zane Riley and Jake Manning.

During Liger’s introduction, X-Pac was visibly moved by the love for the Japanese legend. The match featured all three legends hitting all the right notes and saw them pick up the win with a Liger brain buster.

After the match, X-Pac and Helms each got on the microphone. X-Pac noted how this is Liger’s retirement tour and how honored he was to team with him. Helms talked about how everyone knows who he works for now (WWE), but he begged for permission to be on this show so he could team with Liger.

This was a go out of your way to see type of match. Lee started hot with two suicide dives right off the bat. Cavernario at one point dove from the apron, through the ring post and onto Lee on the outside. He then proceeded to throw Lee into the front row, much to the surprise of those he landed on.

Cavernario hit his trademark splash from the top rope to the outside on Lee while Lee ended back up in the crowd again after a flip dive over the top rope.

After Lee picked up the win, fans filled the ring with money as a sign of appreciation for the efforts put forth by both competitors.

While that match was up-and-down, the next match had a totally different pace, although it was great in a different way as Zack Sabre Jr. defeated Shane Strickland.

Naturally, Sabre wanted to twist Strickland in knots, but Strickland held up his end of the bargain and did a lot of damage to Sabre, as well. The two exchanged chops and punches, but Sabre reversed Strickland late and completely tied him up in one of his signature holds, forcing Strickland to submit.

On a show that featured so much action, the featured six-man tag team match provided a lot of levity and added greatly to the night. SoCal Uncensored (Christopher Daniels, Kazarian and Scorpio Sky) beat Orange Cassidy and Best Friends (Chuck Taylor and Beretta).

For those who are unfamiliar with Cassidy, you’ll want to familiarize yourself with his work, as he has one of the most unique gimmicks in the sport.

While this was mostly comedy throughout, it was welcomed and will be on a short list of most memorable matches from the weekend. 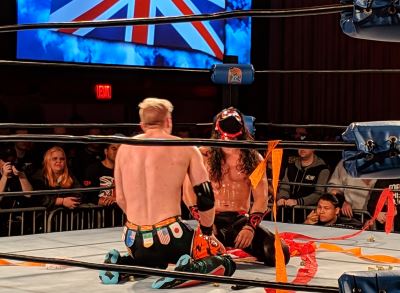 Will Ospreay and Bandido.

In the main event, Will Ospreay and Bandido had a match worthy of their main event positioning. This was all over the place. The two ran at each other to start the match and Ospreay turned that into a Spanish Fly. As Bandido rolled out of the ring, Ospreay hit his signature Space Flying Tiger Drop and off we went. At one point, Ospreay paid tribute to his partner at Friday’s Revolution Pro show (Hiroshi Tanahashi) by hitting a springboard High Fly Flow onto Bandido which landed both in the crowd.

Eventually, Ospreay put Bandido away with the Stormbreaker.

All told, the rest of the myriad shows this weekend have a lot of work to do to match this show as a total package.

Matt Bishop is hitting as much wrestling as he can around town in New York City. He tapped out after being up 21 straight hours … after filing this report.