As WrestleMania weekend approaches and another NXT TakeOver looms, it’s easy to forget that this was supposed to be Tommaso Ciampa’s time to shine.

Sure, he probably would have lost his originally scheduled match with Johnny Gargano, in the culmination of a rare-for-its-time (yet super hot) long-running storyline. That’s not that important in the grand scheme of things.

What matters is that Ciampa would have been recognized for the star he’s become, a man who’s gone from obscurity to prominence in impressively quick fashion. Alas, injury and surgery have sidelined Ciampa for his brand’s biggest show of the year, in an arena that NXT founder and executive producer Paul Levesque calls its spiritual home, Brooklyn’s Barclays Center.

In his annual media call during the run-up to WrestleMania — where he will also climb back into the ring as Triple H to face off against Batista — Levesque expressed his disappointment that fans would not get to see the dramatic conclusion they’ve been expecting.

“I hate that Johnny and Tommaso won’t be able to payoff what’s been a long storyline for them, he said to a reporter. “It is what it is, and we’ll head in a different direction that will deal in an epic moment.”

It helps that what Levesque and the other members of the creative team came up with is a pretty darn good contingency plan: Gargano taking on Adam Cole in a best-of-three falls match for Ciampa’s now vacated NXT Championship. Though TakeOver: New York appears on paper to be excellent from top to bottom, Gargano and Cole should tear down the house.

And that’s even without a lengthy build-up to make it feel important. Having seen so many plans change because of extenuating circumstances over his years in the business, Levesque noted that there are times when winging it leads to matches and narratives that end up becoming memorable in their own right.

“When something unfortunate happens, whether it’s this situation or any other, in our business, things happen and when they happen, everybody has to sit down, come up with a whole bunch of different suggestions about different ways to go and how to solve it and do it in the best manner possible,” he said. “I often say that sometimes the best things come out of that chaos. Chaos, for whatever reason, sometimes creates this beautiful storyline. Some of the storylines that have happened over time that are the best ones came out of, ‘we were planning to go here, then some unfortunate series of events happened and we have to reboot.’ It just happens that way.” 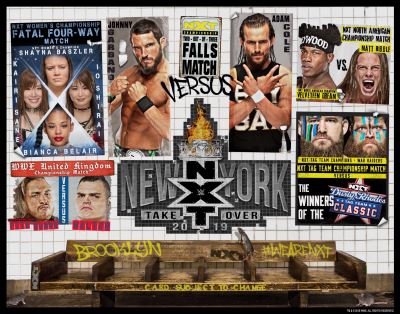 Interestingly, Ciampa made his debut on the main WWE roster back in February, not long before he ended up being placed on the shelf. Levesque characterized his injury as something that those in charge knew about, but went from something “manageable” to where “it progressively got worse.”

Lauding Ciampa’s leadership and work ethic, he said that there were no regrets about calling the wrestler up despite what ended up happening.

“We knew that was going to be a necessity going forward, but the decision was still made of ‘let’s do this’ with the main roster, let’s give him that exposure,” Levesque said. “He’ll take some time off. We’ll use that in whatever way we can, he’ll take the time off, get fixed up and be back and better than ever and move forward from there.”

The depth of the current NXT roster gives Levesque and company the security to know it can go to a Plan B when something unfortunate occurs. Yet even with Cole thrust into the championship match, the TakeOver: New York card is a lean five matches, with a title on the line in each one.

Contrast that to the sprawling WrestleMania card, which currently stands at 12 matches (not including those on the pre-show) and has led to speculation of the longest running time in the event’s history. It’s natural to question, as someone did on the conference call, whether TakeOver is setting a precedent for quality over quantity that its bigger, more famous sibling could emulate.

Levesque acknowledged the balancing act but explained that both approaches have their place in the overall scheme of things.

“That’s a constant battle of giving everybody everything that WrestleMania needs to be — making it important, making everybody have something to do,” Levesque said. “ If you leave someone off the card, people will say it’s disrespectful. You need to have it be a reasonable length of time. There’s so many factors that go into all of this, and we’re constantly evaluating all of them. I like the way TakeOver feels. I like leaving them wanting a bit more with that brand, when you get to the end and feel that everything was epic, but it wasn’t too much. Then again, WrestleMania is the biggest show that there is. There will be 75,000 people at MetLife Stadium or so. It’s epic and it needs to feel that way.”

In other words, like one of the most time-honored show business cliches says, the show must go on. It’ll do so this year without the man who was poised to have the biggest night of his career, but while it’s a bummer for Ciampa, all of the ingredients remain in place for another stellar NXT TakeOver. Levesque will have a firsthand view on Friday to see if it lives up to its potential, but he’s already confident that it will.

“This is an exciting card,” he said. “I know I say that a lot. The challenge is to always get to where you can top what you’ve done before, but I really feel like this is one of the biggest shows we’ve ever done. Top to bottom, it just feels special.”