WrestleMania comic will have you tapping out

What makes a good comic book? Appealing coloring, great art and a captivating story. WrestleMania 2019 Special from Boom! Studios has none of those qualities.

Boom! has been producing the WWE line of comics for the last few years. The quality issue-to-issue has been like Bray Wyatt’s career in the WWE, sporadic and underwhelming. 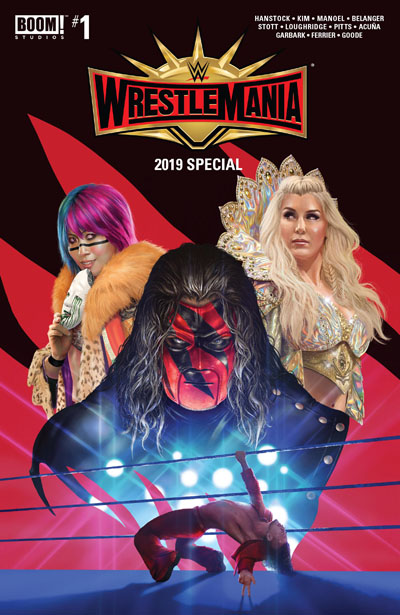 With the exception of the fantastic cover by Rahzzah, the WrestleMania 2019 Special is a new low for the series featuring some of the worst storytelling since the Big Bossman fed Al Snow his own dog or Kane dated Katie Vick. The Special consists of four stories, all except the last one are botched spots of Sin Cara proportions.

Queen Versus Empress summarizes the career of Charlotte Flair and her WrestleMania feud with Asuka as told from Charlotte’s and then Asuka’s point of view. The coloring, a mix of pukey washed out pastel colours from Wesllei Manoel, doesn’t make the pages pop at all. Instead they just all blend together into some muddled mess that looks like the bottom of your toilet bowl when you have drunk far too much alcohol the night before. Queen Versus Empress is about as exciting as a feud between Mojo Rawley and Curt Hawkins.

The Destruction Brothers is a retelling of the Undertaker and Kane’s original feud in which Kane was accused of setting the family’s house on fire killing their mother and the careers of some notable WWE bookers in the process. Everyone is dressed in Victorian clothes for some strange reason as Paul Bearer weasels his way into the family’s lives. The most interesting thing we learn is that Kane has apparently been bald his entire life. What a news flash. At least the colouring is bold except in the flashback sequences.

King Without a Crown stars Shinsuke Nakamura, who except for a decent paycheque and bragging rights to a WrestleMania match under his belt, has wasted his time in the WWE. Shinsuke is suffering from in-ring performance anxiety so he confides in Asuka while they eat beignets. No, I am not kidding. I wish I were. Just like the WWE’s booking of the great Shinsuke this story castrates the King of Strong Style.

The final tale, I’m Sorry. I Love You. is the only strong story of the bunch as Shawn Michaels expresses his regret over ending Ric Flair’s career at WrestleMania XXIV and all that led up to it.

“To this day, I remind myself that part of him wanted it. That he chose me. It’s the only way I can sleep at night,” explains Michaels as he relives that most famous of Superkicks.

Even though they saved the best story for last so at least you can close the book on a high note the WrestleMania 2019 Special is mostly just a retelling of angles any experienced wrestling fan already knows. To me, that’s just a lazy approach to what should be a really special comic commemorating WrestleMania 35. Instead of spending $7.99 U.S on this uninspired, sloppy, Brock-Lesnar-WrestleMania XIX-shooting star press of a comic you should buy a WrestleMania 35 program. Years from now you will cherish it more.