There’s Kenny Omega the wrestler and now Kenny Omega, one of the executive vice-presidents of All Elite Wrestling (AEW). He recently told SLAM! Wrestling that the new role has changed the way he watches wrestling — a little.

“I find myself focusing a little more — and I stress a little — I focus a little more on the business end of things,” he said while promoting his TSN documentary Omega Man – A Wrestling Love Story. “Before I would focus mainly on match quality and reception, but now I have to take into account what building are they running, what kind of numbers did they draw. Then I take into account, okay, if they drew low, are the people that are there, are they having a fun time, do they seem like they’re having a ball? And if not, then what did they do wrong? What’s missing, what’s lacking? You have to go into depth with these things and make sure I do what they do right, or I don’t make the same mistakes that they do.” 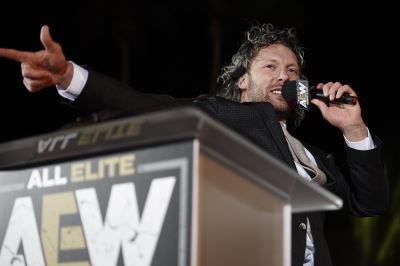 Kenny Omega at the announcement of AEW Double or Nothing at the MGM Grand in Las Vegas. Photo by Al Powers, MGM Grand

AEW has three upcoming shows announced: Double or Nothing on May 25 in Las Vegas; June 29 in Daytona Beach, Florida; and Fight for the Fallen on July 13 in Jacksonville, Florida.

Note that AEW is not a part of WrestleMania weekend. That was a conscious decision, said Omega.

“We want everyone to do well, and we’ll try not to step on any toes. That’s exactly the reason why we’re not doing anything at WrestleMania weekend,” he said. “We’re backing off completely, that’s WWE’s thing. If people want to encroach on that, or piggyback, or whatever, that’s you, that’s a great business strategy, because the people will be there. Wrestling fans that are there in the area, sometimes WrestleMania isn’t enough, they want more. So there’s no shortage of options, but we want to give everyone their space.”

The new promotion now has two dozen male wrestlers signed, though not all are exclusive, and 10 women.

“We have many more announcements to come, exciting ones, much more talent to announce,” teased Omega. “People that are looking for a true alternative, whether that it be that they want an alternative to use as a primary source of wrestling entertainment or if they just want to add it to their list of already diverse wrestling entertainment, we can be that promotion for you, because it’ll be something that’s different from everything that you’re already watching.”

It can’t be the same as the ultra-successful All In show from September 2018, partly because Ring of Honor helped out a lot behind the scenes with that event. “The relationship between AEW and Ring of Honor is kind of non-existent right now,” conceded Omega.

The talent changes too.

“The tester, or proof of concept, that was All In. They’ll just be more of that but on a full-time basis,” he said. “However, now that the players are a little different than what we had at All In, you can never be completely certain as to how people will react because we are missing some people that were at All In, but we’ve added new faces that either people know or some of them that people have never met before, so we’re taking a chance on developing a new wave. I think that’s the right way to go and I’m really excited to watch these guys develop and hopefully take the world by storm.”

Going into WrestleMania weekend, with hundreds of wrestling shows and events going on in and around New York City and New Jersey, it’s a fair question to ask Omega as AEW is about to enter a crowded marketplace: Is there too much wrestling?

“Maybe that’s why I like these alternatives to what we’re doing, because we could easily be the only promotion that you watch, or if you just can’t get enough wrestling, we’re at least different enough where you might want to add us to your regularly-scheduled programming,” he said. “But, again, we’re not at war with anyone, we’re not competing with anyone, we’re just trying to be us.”