New Japan Cup Night Eight: One of the best comedy matches ever 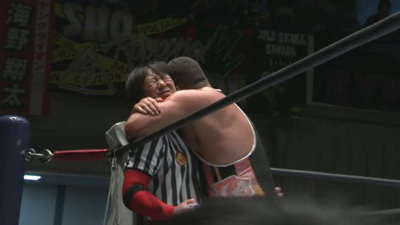 Ring of Honor star Colt Cabana has made it to the Quarterfinals of the New Japan Cup as a result of a truly classic comedy match against Toru Yano.

Getting prepared to lock up with Yano, Cabana carefully folded up his robe then just flippantly threw it over his shoulder to a Young Lion setting the tone for the bout.

Cabana found a roll of tape in Yano’s trunks as he held him in a waist lock. Cabana complained to Red Shoes. Red Shoes searched Yano and found another behind his back.

Cabana tossed the roll of tape out of the ring. Yano snuck up for a roll-up and a two count.

Yano pleaded that it was all just a joke.

“Small joke,” said Yano in his own defence.

Yano offered his hand to Cabana but backpedaled to work on untying a turnbuckle pad.

Yano ran to the opposite side of the ring and another turnbuckle.

To apologize, Yano retrieved one of his packaged curry meals offering it to Cabana.

Cabana tossed the gift into the crowd. As Yano watched it sail away, Cabana rolled him up for a two count.

Yano left the ring in search of his missing present. Cabana followed in pursuit. Yano rolled Cabana back into the ring and Cabana kept rolling back out. A frustrated Yano complained to Red Shoes.

Cabana and Yano ran into the ropes crisscrossing eventually finding themselves on the same side bouncing off the ropes together. Red Shoes and the wrestlers stood confused.

A head scissors by Cabana took Yano to the floor. Yano met Cabana on the outside with a kick to the stomach and bounced him off the security fence. Yano crawled under the ring retrieving another roll of tape. Cabana took possession of the tape hurling Yano into the fence. To thwart one of the Yano’s signature moves, Cabana used to tape to secure the red turnbuckle pad. Red Shoes began to count Yano out.

“Slow down! Slow down!” implored Cabana as he worked on the buckle.

Yano ripped the blue turnbuckle pad off; however, the red one remained secured by the tape so he removed the neutral corner buckle instead. Yano and Cabana tossed the pad back and forth confusing Red Shoes. Yano threw the buckle to Red Shoes confounding the official even more.

Yano swung at Cabana with the pad and missed. Cabana pinned him with the Superman cover.

Red Shoes was the recipient of a victorious hug from Cabana.

Before leaving the ring, Yano gave Cabana a package of curry so there were no hard feelings.

“What is going on?” asked Cabana as he passed the announce desk stunned by his own win.

Sanada defeated Minoru Suzuki in the only other tournament match of the night. Sanada remains as the only member of Los Ingobernables de Japón left in the elite tournament.

Following today’s results, the Quarterfinals bracket has been decided.