“Diamond” Dallas Page is known for helping people. Not too long ago Page had the opportunity to guest star at the WWE Performance Center and as always he made his mark with a bang.

Page relished the opportunity to work with the young talent of NXT in an atmosphere that he described as being on an NFL level. A few decades earlier, Page was an older rookie in the wrestling ring and started by paying his dues in WCW’s Power Plant. The Power Plant was a training ground run by Jody “The Assassin” Hamilton for up and coming wrestlers. The most notable athletes to graduate from WCW’s facility were Page, Bill Goldberg and Bob Sapp who was a star in Japan. 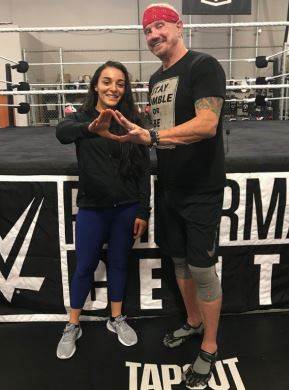 “The Power Plant was a great base to try to figure out how to start to train guys to get ready for it, for the show, whether it was WCW or WWF,” recalled Page. “The WWE Performance Center, Paul Levesque, Triple H, was there with me as well. He was with me in the early days.”

A few years ago, before the Performance Center existed, Page met with Triple H to discuss some business. When Page broached the subject of working with some of the WWE’s emerging talent his old friend put the brakes on the conversation.

Page recounted the conversation for SLAM! Wrestling: “He (Triple H) said, ‘Listen D, just wait another six to nine months. I am building something that is going to be on the level of an NFL combine type thing where these guys are going to come in and have multiple rings, super training facility with strength coaches.’ Their area for injuries and stuff, preventative maintenance they are doing is along the level of the NFL.”

Over the four days Page spent with the NXT crew in July 2018, Page had a unique and varied experience. “I did a little bit of everything,” said Page. “We did DDPY four mornings and two afternoons, a couple of the days were double days. Cain Velasquez (former two time UFC heavyweight champion) came to five of six sessions. Shayna Baszler, she is such a badass. She wrote me, ‘Thank you so much. I am so glad you came because this is something I never would have sought out and tried on my own. It is something I definitely need.’ She got it, she is a champion and a badass.”

The interaction with the young wrestlers certainly energized the former WCW World champion but it was Velasquez who really caught his eye. “Cain Velasquez looked amazing in the ring,” said Page. “The octagon and the wrestling ring are completely different but the athleticism is similar. If he decides to do this he will become a big player in our game. It is the crossover. It has always been there, you can go all the way back to Dan Severn. You have to be able to do the entertaining as well. This is what is different from the Frank Gotch days, you have to be able to cut a promo, you have to have charisma in the ring. Brock [Lesnar] would be the best example of all of them.”

With the experiences he had from the Power Plant, Page had a unique perspective about how the WWE runs its training sessions. “When it comes to in ring work, it is more structured because there were five, 10, 12, 8, 20, 15 guys down there at any given time,” said Page. “There are 70 wrestlers there and many different coaches working with different teams for different levels. What is happening in the ring is very similar but if you look at the moves that kids do today, I don’t know where they go from there. I didn’t know where we went from where we were at. We were hitting with such an impact. These kids today, AJ [Styles] is a perfect example of a superman but at that camp there is a s—load of supermen down there.” 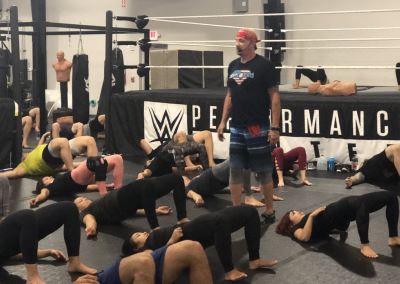 NXT standouts Velveteen Dream and Ricochet made an impression on the master of the diamond cutter. “The guys who popped my brain first was Velveteen Dream,” said Page. “I’ve known him from his first match at 18. I saw his first match, he asked me to watch it and my jaw was on the ground back then. So, I am not really surprised, I am surprised to a certain degree that he did it so fast. He has had that training down there that whole time that I watched him teaching guys. His whole key is staying healthy and that is where I come in and be on him.”

“Ricochet, he is a super human being, he can do so much. Again, the impact is the impact. We all only have so many bumps. Now, I don’t know how Jeff Hardy is still doing what he is doing, I really don’t. It is different being 6’1 and 205 and being 6’4 and being 255. Those are two different animals hitting that ring because of the impact of carrying all of that weight and muscle. I am just saying Jeff Hardy is a freak. He is an amazing freak.”

Page didn’t just talk about wrestling and DDPY with the NXT wrestlers. He emphasized that as people and as athletes that they need to own the, “six inches of real estate between the ears.” The story you tell yourself will manifest itself if you believe it.

During one session, Page got to talk about the only athlete who made the Time Magazine list of the most influential people of the 20th century: Muhammad Ali. Page pointed out that Ali called himself the greatest of all time even when he wasn’t because he believed he was and would be through hard work and positive affirmations. Even when Ali stood up to the U.S. government and refused to serve in Vietnam and had his boxing title stripped, Ali kept a positive outlook. He shaped his world through positive affirmations.

“After I’m done Tommaso Ciampa comes up to me and I can see in his eyes that he is emotionally effected and he shakes my hand and says, ‘I needed to hear that DDP. You have no idea how much I needed to hear you say that.’ He gave me a big hug,” recalled an emotional Page.

The next day Page attended the NXT TV taping and was very impressed. “Now when they do the TVs, which I stayed to watch, the preparation, the writing, changing the show on the fly, the entrances, they get all of that at that Full Sail College which they turn into a WWE facility like a smaller Nitro or RAW except it still feels as big as that. So it is an amazing testing ground and a place for these kids to really grow.”

“I like to be where I can hear the crowd,” said Page. “Everybody is back in the room, watching the show on a huge screen, just super laid back. All the boys are there, all the girls, but I wanted to be there to hear the reaction. When it got to the main event for that first show and I’m watching Ciampa go through his stuff and get into his zone. He gets up on the steps and he doesn’t have any ring music, which makes him different than anybody, and I just happen to look up at the same time he looks over at me and he goes ‘Affirmations.’ Then he takes off to the ring.”

“Diamond” Dallas Page is known for helping people reach their fitness goals. After his time at the WWE’s Performance Center he can also say that he helped to teach wrestlers about switching the script in their heads. He taught them about positive affirmations so that they too can aim to become the greatest of all time.