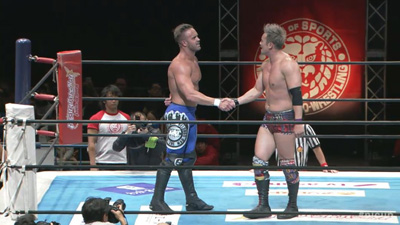 Night Six of the New Japan Cup featured a classic David versus Goliath match-up and an all Chaos main event.

The Aerial Assassin Will Ospreay had to use every weapon in his arsenal to get the victory over Suzuki-gun’s Lance Archer and his approximately 91 pound weight advantage.

With both men standing on the mat it was impossible for Ospreay to set-up Stormbringer because of Archer’s size. Archer neutralized Ospreay’s Hidden Blade by driving him to the mat with Blackout.

To the shock of everyone in the Nara Centennial Hall, Ospreay kicked out.

Ospreay struck Archer with a Hidden Blade, a Cheeky Nandos Kick and a Strormbringer from the second rope to secure his spot in the Quarterfinals. Previously in the tournament Ospreay got the better of another New Japan giant: Bad Luck Fale.

Okada was able to slip out of what would have been a match ending Mikey Bomb and clobber Nicholls with a Rainmaker clothesline to end the match.

The two shook hands afterwards. Nicholls is the newest member of the Chaos faction and has racked up a series of impressive wins since returning to NJPW this month.

In the Quarterfinals, Kazuchika Okada will collide with his Chaos pal, the man he brought to NJPW: Will Ospreay.

Also on the show, Bullet Club’s Chase Owens made his intentions very clear when he jumped Juice Robinson as he was celebrating a tag team win.

“Chase said I was ducking him earlier? I am not ducking him,” Robinson told Kevin Kelley at the announce table.

Chase Owens, dressed in a Bullet Club hoodie, blindsided Juice putting the boots to him, choking him and super kicking him into next week.