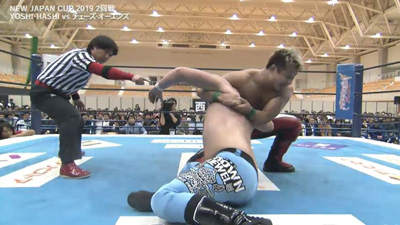 On Night Five of the New Japan Cup there were only two tournament matches on the card. Yoshi-Hashi faced the Bullet Club’s Chase Owens and Tomohiro Ishii fought Suzuki-gun’s Taichi.

In their bout, Owens almost submitted to Yoshi-Hashi’s Butterfly Lock but he powered his way back to his feet driving Yoshi-Hashi into a corner. Owens ran into a Yoshi-Hashi clothesline. Yoshi-Hashi put Owens away with his Karma (Pumphandle Half-Nelson Driver) finisher.

Tomohiro Ishii pushed ahead in the tournament by surviving Taichi’s bending of the rules which included him kicking Ishii in that “sensitive region”. Taichi kicked out of Ishii’s Sliding Clothesline; however, he could not do so when Ishii poleaxed him with his Brain Buster.

Ishii will now take on Yoshi-Hashi in the Quarterfinals.

In other matches on Night Five:

Los Ingobernables de Japón (Sanada and Evil) defeated Suzuki-gun (Davey Boy Smith Jr. and Minoru Suzuki). Sanada pinned Smith Jr. with an Okada Roll. An irate Suzuki hurled guard rails at the Young Lions, tossed one into the first row and beat him with a chair.

Colt Cabana, Mikey Nicholls and Ryusuke Taguchi beat Toru Yano, Kazuchika Okada and Hiroshi Tanahashi. Nicholls pinned Yano with the Mikey Bomb. Taguchi, who will face Tanahashi in the next round, offered to put an ice pack on Tanahashi’s knee then tossed it away so he could slap an ankle lock on him instead to do more damage to that sensitive knee.