Businessmen in wrestling is nothing new. From the appearances of President Donald Trump, Ted Turner, music mogul Rick Rubin, and now Tony Khan, there has been tales of money makers who fund or create their own brand in the various wrestling leagues and ventures. One businessman who created a wrestling product whose name may not pop out is Sean Oliver.

In October 2018, my brother bought me Sean Oliver’s Kayfabe book as a birthday gift. I vaguely knew of Oliver’s work, running a video shoot business that interviewed wrestlers, called KC Commentaries. Towards the end of the book, a section covering the business side of the video making process, along with some of the changing media platforms that affected his company, brought an interesting viewpoint to his writing.

Oliver’s latest, The Business of Kayfabe: Turning Wrestlers’ Secrets Into A Million Dollars, covers more of this business side, along with guides to make a business into a money-making project.

With past employment in real estate, film and television, along with working on Wall Street, the author shares his knowledge and opinions on how to determine if a person’s dream is marketable for a successful career or not. Oliver gives advice such as being a passionate participant in whatever the person is selling, how to run and grow the product, along with avoiding some pitfalls that he has seen during his time working for others, and creating his own brand. One of the main topics, which he describes as “The Business of Blood,” is born out of the passion of the creator, and is one of the main things that separates the big time owners from the smaller business entrepreneurs. 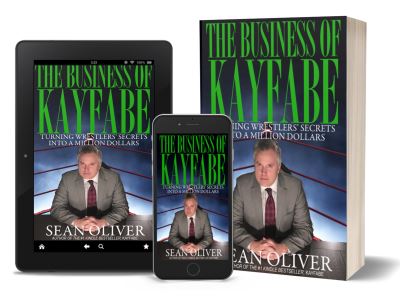 There are a few wrestling stories in the book, which Oliver tells about either failed projects his company was involved in, to others in the wrestling business pitching ideas for videos, which he had to veto (even Oliver gets shot down, as he writes in the book about an encounter with Gene Simmons of KISS). Stories about wrestlers’ attitudes and some misfortunes in setting up the video shoots are covered, however, most of the wrestling stories are mostly retellings from the first book.

This is not a book with wrestling stories that carry on from the previous publication, but a text that would be used in any economics or business course at universities. There is no doubt of the author’s love for wrestling (he created a business on it), but readers who want to read about the wrestlers Oliver has dealt with may be let down a bit, so seek out the previous book. The overall tone is how to determine if your dream is marketable, how to build it, and sustain the dream with realistic style profits. Oliver gets into more detail with his company’s competitors, and the obstacles that have affected his profits from the last writing, which is an interesting read.

Wrestling books of late have been geared towards a How-To focus, from Dallas Page’s to Chris Jericho’s recent writings. One can not dispute the effect that KC Commentaries has had on the video interview arena, but those that are looking for more wrestling stories may find this book not for them. However, if the reader is looking for some help in creating a new business, and would like a lesson in how to get from Point A to Point B, The Business of Kayfabe is a good handbook to getting the person on the road to (hopefully) possible success.