I knew this moment would come eventually… This is a long one… Please bear with me.

I didn’t think I would write all this tonight but, here we are…

So last week, I fell down the stairs (idiot!) and I sprained my right knee. It was definitely nothing major when you think about it as I have seen a lot worst in the past 22 years. However, I didn’t expect that this little injury would reveal a bigger problem.

In the past years, the same knee felt weird and sometimes weak but nothing alarming. I ignored aches and pains… Such behavior comes with being a professional wrestler from my generation.

Yes, it makes me sound old (well, I just turned 39) but back in my days, when you were injured, you didn’t talk about it. Being the only girl around and wrestling the boys, it was even worst. I just couldn’t mention anything about being in pain. If I did, you can be sure I would hear things such as “just a girl; she don’t belong; look at this weak moron or what a pussy!” 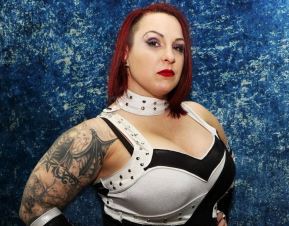 So, when I hurt my knee back in 2002, I got it cleaned up and went back in the ring only 2 months after the surgery. I had no time to wait a year to reconstruct everything. I couldn’t say I was hurt and I wanted to prove wrong everyone who doubted me and laughed at me for wanting to be an equal to my male colleagues. Courageous or stupid? Today, I would say the latter. Different times, I guess.

Truth is that I’ve been wrestling with an empty knee since then… No ACL, MCL or meniscus, just bones. So you can only imagine what was going on in there. Looking back, I have to admit that somewhere deep inside, I knew I was on borrowed time… It just lasted a lot longer than anyone could have predicted.

When the orthopedist looked at my x-rays this past Monday, there were no breaks… But it really didn’t look good. There is so much arthrosis, or another name for osteoarthritis. What it means is that, because of the extreme wear and tear, my cartilage is deteriorating. The joint looks like an 80 years old knee. Things could get a lot worst if I don’t do anything about it. One thing is for sure though. I will need a full knee replacement before I’m 50, way sooner if I keep going the way I do. It could also affect my ability to walk and perform regular day to day activities.

And it hurts. It’s been hurting for a while.

A part of me has always hoped that the sweat, blood, scars and the thousands of tears would pay off. So, I was fighting through the pain. You make bad decisions for a dream sometimes…The pursuit of the dream has also messed with my head and my heart.

Storylines and promos about me being “bitter” and that I was always complaining (even if I knew it was just for “the show”) or interview questions on why I didn’t make it started to be way too heavy on me. Even if it was part of the character, mainly my heel persona, I’ve never been comfortable with the concept. That this hurt me so bad shows you how messed up my mental state it. Why? Because it couldn’t be more far from the truth.

I love wrestling. I love it so much that I fought tooth and nail for respect. I got beat, stretched, called an asshole or a big head because I wanted women to be seen as equals and no, being a manager or valet wasn’t enough for me. I wanted to be a wrestler. That’s all I ever wanted to be.

Heartbroken that I didn’t prove wrong all those people who were telling me that I was wasting my time, that I was a loser, that I wouldn’t go anywhere… Today, I feel like they’ve won. I’m grateful for every single opportunity and for all the promoters who let me step into their ring. However, I have that emptiness that there is something missing because I didn’t reach my goal of joining one of the major promotions. No matter how hard I try, it just won’t go away.

I am over sensitive and weak. I’m so tired, all the time. I feel like I’ve been buried alive. I’m there but I’m gasping for air…

Therefore, because of my body tells me it can’t go on, because my soul is filled with darkness, because my heart is so heavy that there is no more beauty in anything, I have decided that 2019 would be the last year of LuFisto.

I have cancelled many bookings already and might cancel more. There are few places I would love to wrestle at least one more time; opponents that are special to me that I want to share the squared circle with one last time… I’ve already started to sell my gear so if there is anything any of you would like to get as a souvenir, please let me know.

I haven’t decided when and where it’ll all end or against whom. That is something I shall work on in the next few weeks.

39 might be old for wrestling, but there can be many years of happiness ahead if I dedicate myself to something else, find a new passion or rediscover one from the past. I let go so I, as a simple human being, I can smile once again and accept the things I cannot change and control.

“Letting go doesn’t mean giving up, but accepting that there are things that cannot be…”

Forever grateful for your love and support, I thank you.