OTTAWA, Ont. — There is no question that women’s wresting has become the representation of power, inspiration and perseverance. Many fans over the years have witnessed these women break barriers and even struggle to get to where they are today. Femmes Fatales 21 was of night of just that, but also one of admiration for a group of spectators in particular.

If anyone had a blast at this event, held at St. Anthony’s Banquet Hall in Ottawa on Friday, February 22, it was the entourage of little girls sitting in the front row. Before the first match had begun, they stood in front of the ring and flexed their little biceps with smiles from ear to ear. The spark of excitement would be enough to make any of the female wrestlers in the show proud to be a role model.

“Nevaeh, who has been wrestling for ten years, told me that this was the best crowd she has ever performed for,” Pat Laprade, organizer for the event, told SLAM! Wrestling. As soon as Femmes Fatales got underway, the crowd was on their feet — or on their chairs — cheering and chanting away.

The event kicked off with Allysin Kay storming into the ring, with a look that could kill. After it was announced that her opponent, Lufisto, was injured and couldn’t compete, Kay demanded another worthy opponent to take on. When no one stepped up, she left the ring and waited for anyone to take her on. 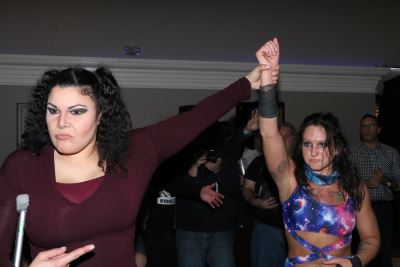 The first bout was a tag team match between the team of KC Spinelli and Veda Scott versus Alexia Nicole and Willow Nightingale. The former walked up to the ring wearing unicorn heads, making them a crowd favorite with all of the young girls. However, they were no match for Nicole and Nightingale, who powerbombed their way to a win. We were only getting started.

After the “Lost Girl” Samantha Heights defeated Nevaeh, we moved on to a wild singles match between Jessica Havok and bad girl Penelope Ford. From the start it was easy to see that the Havok would put Ford through her “Death Machine,” but that wasn’t what the audience was hoping for. Most of the screams came from that small group of girls sitting at the front, yelling “YOU SUCK” at Havok, hoping to distract her from demolishing Ford. After her win, the Death Machine turned to the girls and gave them an evil smile. However, this was just part of her act.

When it was time for intermission, Havok was on her way to sign some autographs for the fans until one of the little girls stood in her way. Havok looked down and smiled, waiting for the girl to notice. When she finally turned around, the girl looked up slightly terrified at the tall and dark wrestler standing in front of her. Havok put up her hand for a high five and continued walking. The little girl beamed with happiness and ran over to her father and told her what happened. The affect that these wrestlers have on young girls is incredible, something you don’t always get to see in the flesh.

Most girls grew up with models and actresses as aspirations, something that is extremely hard to attain. These female wrestlers have a platform to change that, to be the representation of all personalities, whether it’s a blonde and tough Kimber Lee or a dark horse like Tessa Blanchard. Their message has always been the same, even before the women’s revolution: be yourself.

The main event was one of a kind for Femmes Fatales. Allysin Kay got her wish for a new challenger, and then some. Kay was now going to face Mercedes Martinez and “The Alien” Kris Statlander in a triple threat match. Not only was this a special treat for the fans, but for Statlander as well. 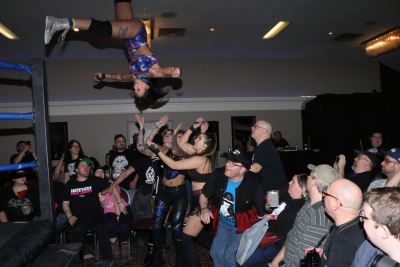 Kris Statlander flips out onto her opponents.

“She was not originally booked for this show,” Laprade explained, “but my partner and I went to a show that Statlander was at and made a very good impression.” Furthermore, she was shot-gunned to the main event because other women had suffered injuries right before the show. Statlander won over the crowd with her high-flying acrobatics, running both Martinez and Kay down. In the end, Statlander pinned Kay and took the victory.

The young girls jumped with joy, laughing and screaming with excitement. It was a night out to celebrate women’s empowerment and be an inspiration to everyone in the room. That’s what it’s all about, right?

The next Femmes Fatales show will be on May 4 in Quebec City, followed by another on August 10 in Toronto during SumerSlam weekend.