Tony Kozina has been in the wrestling industry for more than 20 years, and, six months ago, he relocated to Auckland, New Zealand, to serve as head trainer at his former mentee’s dojo.

Bad Luck Fale, a founding member of Bullet Club, opened the Fale Dojo in 2016. Fale Dojo, according to Kozina, serves as “a precursor to the New Japan dojo.” 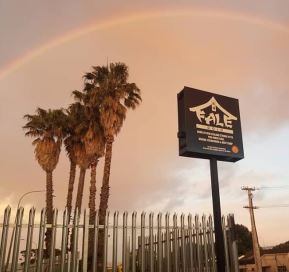 It’s not always rainbows at the Fale Dojo, but sometimes it is.

Earlier, when Kozina trained the likes of Davey Richards and Kyle O’Reilly, he would train “to the point of exhaustion.”

“That’s still a mental discipline,” Kozina said, “and the same thing applies here. We just use a lot of the exercises that we did [training with Richards and O’Reilly] in St. Louis and mix ’em up and put them in, whether we’re just doing a bodyweight workout or [whether we] go to the gym down the street … We push everybody to the point and beyond.”

Kozina said most of those who step into the dojo have at least a few years of experience to their names. Over the course of three months, Kozina said his objective is to develop students’ “in-ring instinct” so they can wrestle “on the fly” and not have to talk before stepping in the ring. Kozina covers “simple, shoot-type jiu jitsu,” along with wrestling fundamentals. He said he has seen wrestlers in North America throw kicks and strikes, but they have “no idea” what they’re doing. 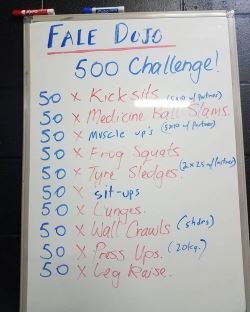 Can you keep up with this training schedule?

“[The] emphasis on combat sports is [that] you can see the difference between people who pretend to be fighters and people who are fighters,” Kozina said, referencing bouts NXT star Kyle O’Reilly has had in the past with Katsuyori Shibata.

In less than three years of existence, the dojo has outgrown its facility and, in September, moved to a larger building. Kozina arrived in New Zealand in June, with his first class graduating in September. 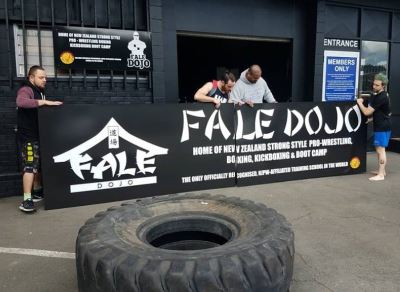 The sign goes up on the new Fale Dojo location.

That inaugural class for Kozina had four athletes, each with “individual strengths and weaknesses.”

“They’re all at about the same type of level,” Kozina said. “Some are more maybe polished than others … [but] there’s a lot of potential for all four of these guys.”

In Auckland, Kozina said, there’s a “growing,” but inexperienced independent wrestling scene. When those who have made a name for themselves — like Jay White or Travis Banks — depart to other countries to further their own careers, their absence “leaves everybody in limbo.” 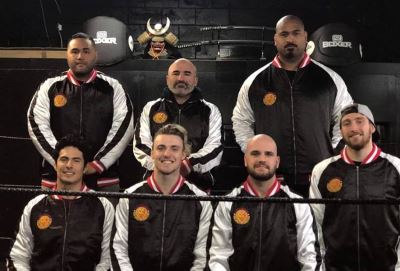 A current student, Omri Scheitman, will graduate from the dojo this month. A native of Israel, he heard about the dojo through NJPW World’s English commentary, and has hopes of stepping in the ring for New Japan.

“This is the best way to get there,” said Scheitman, who had no prior training before coming to the dojo.

For Scheitman, the Fale Dojo is a “launch pad” to becoming an internationally known wrestler, and to be a part of it, means “everything.”

“[Tony Kozina] understands wrestling in a way only a few do,” Scheitman said. “He completely changed my view on how wrestling should be compared to what it is today.”

In mid-December, it was announced that Fale Dojo grads Anthony Richards and Sebastian Matters had been accepted into New Japan Pro Wrestling’s Young Lions program.

SEARCHING FOR THE ‘HUNGRIEST PEOPLE’

There isn’t one aspect of coaching at the dojo that Kozina enjoys more than another — it’s just the whole package. Like when something clicks and “they get it.” Or being able to watch his students develop their instincts.

“And here we are, watching them just grow as performers and become confident and figure it out,” Kozina said. “I can tell just by the feedback I got about a month and a half in, the way they talked about things changed. That’s what I like because if I can help influence one person, or however many people, so this wrestling doesn’t turn into a complete roadside carnival of ridiculousness, that makes me happy. Like I’m contributing something.”

Kozina said the dojo is looking for the “hungriest people” dedicated to the sport.

“I don’t want to say it’s a fast track, but it kind of is … Why would you go to community college when Harvard University is accepting all applications?” Kozina said.