Raul Mata, an EMLL champion in Mexico in the 1960s, before moving to the United States, has died. He was 71.

Looking back on his career, there’s his prominent role in Mexico and in Los Angeles, then less so when he moved to Florida, where he was used as undercard talent. 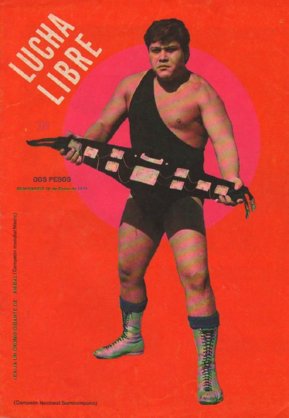 No less than Dusty Rhodes once praised Mata’s talent to this writer.

He was the Mexican National Light Heavyweight Champion for over four years, winning the title from Dr. Wagner on April 11, 1968 and losing to Enrique Vera in June 18, 1972.

In the early 1970s, the Los Angeles territory run by Mike LeBell, was hot, and Mata fit right in, especially alongside Chavo Guerrero Sr. “Chavo Classic” once said of Mata, “He was just happy. You put him on first he was happy, you put him on in the main event he was happy. Just a happy-go-lucky guy.”

A January 1976 Wrestling magazine article on Guerrero and Mata said that Mata was “famed for his amazing aeronautics … His famous flying dropkick has sent many opponents crashing to the mat, allowing Mata to rack up victory after victory. His leaps across the rings are almost legendary.” In retrospect, he was one of the first to really import the lucha style of high-flying into American rings.

Jeff Walton was the publicist for LeBell, and in an email, said that Mata, “was a good hand in this territory in the ’70s and more than that a nice guy.”

Besides winning championship gold twice with Guerrero in L.A., Mata also held the NWA Americas tag titles with the likes of Dory Dixon, Ray Mendoza, David Morgan, Victor Rivera, Mando Guerrero, and his brother Carlos Mata. The long-time heel team in L.A. was Black Gordman and The Great Goliath, and Mata worked against them frequently. As a singles worker, he was the Pacific Coast Heavyweight champion out of L.A.

Mata also wrestled for Roy Shire up in San Francisco, where Pat Patterson was a tag team partner for a time, and in the Culkins’ Mississippi territory he wrestled as a Native-American, Billy Screaming Eagle.

In 1977, Mata returned to Mexico, and beat El Halcón on December 18, 1977 for the Mexican National Heavyweight title, holding it until July, losing to El Nazi. He was also NWA World Light Heavyweight champion from January 20, 1980 to December 15, 1980, beating Alfonso Dantés, and losing to Dantés.

Settling in Florida, he was a regular part of the Championship Wrestling from Florida scene, though not top of the card, and wrestled into the 1990s, on a part-time basis. He also promoted wrestling shows, often inside his auto body garage.

“I can’t say enough about Raul as both a person and a wrestler. He was as genuine as they come, and I don’t think he ever fully got over the passing of his wife several years back,” wrote Barry Rose, curator of the to Championship Wrestling From Florida Archives, sharing the news of Mata’s death on December 19, 2018, on Facebook. “Raul would stick around, off and on, for the rest of his career, making the Tampa region his home.”

A cause of death has not been revealed yet and funeral details are forthcoming.