If I am being honest, and one always should be in a book review, I went into The Comic Book Story of Professional Wrestling expecting to dislike it, to scoff at its lack of respect for the spectacle that I have covered for 30 years.

Instead, I came away impressed.

It’s visually very interesting, factually pretty darn good, and ambitious in covering not just the complete history of wrestling in North America, but also Mexico, Japan, and the United Kingdom.

Officially, the entire title is a mouthful: The Comic Book Story of Professional Wrestling: A Hardcore, High-Flying, No-Holds-Barred History of the One True Sport.

My biggest complaint are those last words, “The One True Sport,” as it comes up again and again, almost like a desperate college student trying to bring up the key point repeatedly in an essay. 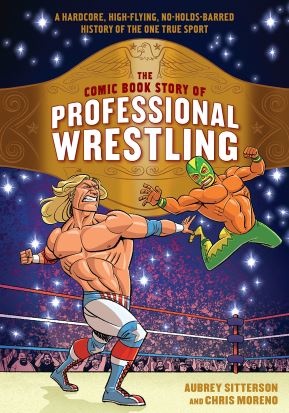 “The One True Sport,” to me, would be wrestling in general, including especially amateur styles like Greco-Roman and freestyle, but also variations in different countries, like Turkey and India. But, hey, amateur wrestling is a little dull, so it’s pro wrestling most of the way through here.

Aubrey Sitterson is the writer of The Comic Book Story of Professional Wrestling. He’s done a lot of interesting comic-related work through the years, including stints with Marvel, DC, Image, BOOM!, Oni, and Viz. He’s also done some things for WWE.com and been a part of WWE video games at 2K Games, and hosts the Straight Shoot podcast. So he knows his wrestling. (He also knows controversy, apparently turfed from a G.I. Joe series for a tweet.)

The artist is Chris Moreno, who previously worked with Sitterson on G.I. Joe for IDW Publishing, but also has done Toy Story for BOOM! Studios, World War Hulk: Frontline, Dracula vs. King Arthur, and plenty more.

As ambitious as Sitterson’s attempt to cover pro wrestling through the centuries (it’s been a work a lot longer than some will admit), I can’t imagine how Moreno stayed sane through the artistic side of it. I can only imagine the pitch: “Hey, Chris, I want you to draw about 2,000 different people and wrestlers for the book, okay?”

Name a wrestler, and chances are he or she is in the book somewhere, making it a “Where’s Waldo?” for wrestling fans. Kudos especially for Moreno, who depicted posed shots and action, and all of it jumps off the page in glorious bright colour.

Together, they smartly choose not to tell everything in chronological order, instead breaking it out into nine sections: Carnival Origins and the Early Days; Gold Dust Trio and Becoming Entertainment; A National Wrestling Alliance; The Masked Men and Women of Lucha Libre; All-in in the U.K.; Puroresu, Strong Style, and King’s Road; The Golden Age; The Monday Night Wars; The New Millennium. Where necessary, there’s a tease pointing you to another page for more on that specific part. One-page sidebar-like shorts help fill in a few blanks too.

Is there stuff missing? Of course. It would be impossible to cover it all.

The importance of Gorgeous George and how it coincided with the growth of the television industry in the United States, is hugely underplayed, and when George’s bout at Madison Square Garden is mention, just after MSG opened its doors to wrestling again, no mention is made that it was actually a FLOP, and that GG was not the draw he was expected to be on the East Coast.

In general, wrestling fans and historians are too quick to ignore the changes in television technology and how it affected the business; as ambitious as Vince McMahon was in 1983, it only works because of the growth of cable television. But drawing TVs isn’t as good as drawing wrestling action, so I understand why it was not a focus.

Whereas so many of the wrestling-related comic books and graphic novels have seemed, hmm, unrealistic would be a good word — looking at you WWE — this one, The Comic Book Story of Professional Wrestling, is the opposite. It all happened, and is recapped here for your enjoyment in 170 pages, whether you are a long-time fan or someone just getting into it.