With only a few weeks to go in 2018, many wrestling companies are looking at ways to end the year off with a bang. Toronto promotion Greektown Wrestling is no exception, loading up their show this Sunday night with a quartet of ECW originals, including everybody’s favourite underdog, Mikey Whipwreck.

By his recollection, “Extreme” will be the first time the former ECW champion has been to Canada since 2001. For wrestling, that is. 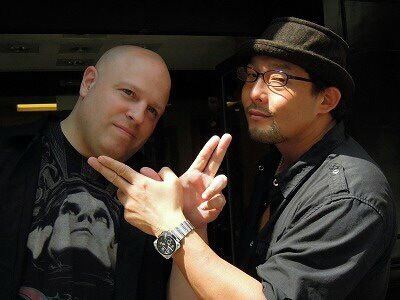 A recent photo of Mikey Whipwreck and Tajiri

“I work full-time — I run a help desk for an international IT company — and I’ve been to Canada for that job,” he told SLAM! Wrestling. “But not for wrestling since (Border City Wrestling’s Mikey Whipwreck Retirement Bash put on by Scott) D’Amore.”

“I’m looking forward to it. I don’t really go looking for work at this point, but they reached out to me, the timing is right, and I get to see old friends like Tajiri and Tommy Dreamer. So it should be a good time.”

While those two, and the other ECW alumnus on the card, Jazz, will all be featured in matches, Whipwreck’s role is a bit less clear, though he may get physically involved in the eponymous “Mikey Whipwreck Over the Top Rope Extreme Challenge.”

“My role these days is mostly managing, refereeing, signings. But I can’t really do a lot of bumps. My neck is still bad, and with all the concussions I’ve had, I can’t really do too much in terms of physicality,” he said.

It’s something that he was reminded of last year at Joey Janela’s spring break show. During that match, Whipwreck got into some action, including taking a big splash finisher.

“It’s one of those days that it felt like it was the right thing to do,” he recalled with some regret. “It popped into my head, I called it, and I was committed. I felt it for the next three days. My hips were all screwed up, I was (in pain). But it felt like a good idea at the time.”

While he can’t go 100% in the ring anymore, that doesn’t mean Mikey doesn’t have a lot to contribute to the business. But now he’s doing that largely through his Underdog’s Wrestling School, which he’s established in conjunction with Pennsylvania promotion, PPW Wrestling.

“The school is good,” he said proudly. “We’ve got a bunch of guys who started in August, and we’re starting to really put things together now. Tommy Suede helps me on Saturdays, and I get them on Mondays and Thursdays. It’s going well. We’re getting to the point where we can get them to start having some basic matches.”

With former students like Amazing Red, Jay Lethal, Tony Nese, and Curt Hawkins, Whipwreck certainly has a strong teaching pedigree, and is committed to help all of his students get to those level of success.

“I’ve told (my students) that we’ll do what we can to help them achieve their goals, whether it’s to get to WWE, New Japan, or to be a Northeast US guy and work two, three times a month. It’s all up to them.”

“We start very basic — tie-ups, chain wrestling, take-downs. Then do some sequences, and build up to matches. We work on character development promos. And when they’re ready, I have no problem helping them (get shows) if they want. I’m having a lot of fun with it.”

Another venture that he’s having a lot of fun with is his new Front Row Material podcast with fellow ECW original Jerry Lynn.

“I don’t really know how exactly that happened,” he laughed. “My buddy Mike Freland called me, but I wasn’t really interested at first. I’m kind of lazy, and I didn’t want to overexert myself — I coach my kid’s soccer team, I got the wrestling school going, I have a full-time job. Then Jerry asked me, and I thought with him and Mike, it could be fun.”

“It’s just basically me and Jerry being ourselves,” he described. “Jerry is who he is, and I’m generally grumpy and funny. And poor Mike is in the middle trying to be the regulator. People seem to like it. We’re doing it very ECW-like, just doing what we do and trying to have fun with it. We had Lance Storm on it last week, he was our first guest, so that was fun. We’re really just taking it as it comes, and in many ways, flying by the seat of our pants. If people enjoy it, great. And if it ever just fades away… I guess I’ll just coach some more soccer teams.” 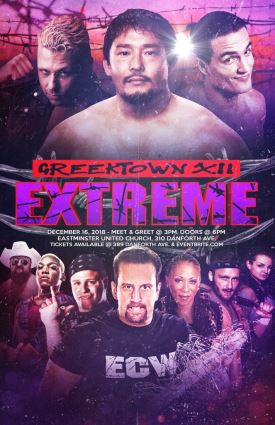 It’s that kind of easy-going attitude that has really driven Whipwreck’s career — combined with hard work and some timing and luck.

“Thanks to Lance and Jerry, I’ll probably just be known for being chunky,” he laughed. “But seriously, I was just a young kid who really had no illusion that he’d be any kind of superstar in wrestling,” he said. “But I got a break, I worked hard, and the hard work paid off.

“As cheesy as it sounds, I’d tell everyone to follow your dreams. If you want to do it, there’s no harm in trying. Have a back-up plan, of course. But if it’s something you want to do, pursue it and try it. If it turns out you don’t like it, you can go back to what you were doing. But you only live your life once, so you may as well try it.”