Whipwreck continues on road to retirement

“It’s going quite well,” he told SLAM! Wrestling while in Winnipeg for a show with the Indigenous Wrestling Alliance. “No injuries yet. So far so good.”

Whipwreck, scheduled to have his last bout later this year, is looking forward to his retirement from the industry. “I have no plans, nothing. My wife makes good money, so I don’t have to do anything,” he said with a laugh. “I’m going to sit at home and get fat.” 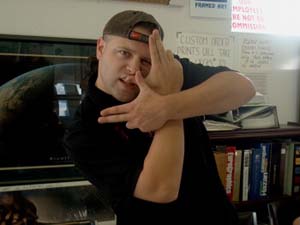 Among the organizations Whipwreck will be working for before his retirement is Main Event Championship Wrestling. While he has not signed an official contract, he has agreed to work shows for the upstart promotion. “We’re all looking forward to that and that should be really good,” he said. “We’ve got a lot of good talent and we’re ready to go.”

Where Whipwreck will not be working, however, is among his former ECW cohorts who are part of the WCW/ECW Invasion angle in the World Wrestling Federation. “I couldn’t work a four-to-five day schedule,” he said. “my body just couldn’t handle it.”

Whipwreck will best be remembered for his hardcore style, much of which was on display during his time in ECW. However, he would not advise wrestlers to follow in his footsteps. “If you don’t have to do it, don’t do it, but if you have to do it, you have to do it,” he said. “I wouldn’t recommend it though myself.”

Whipwreck began his career with ECW in 1994, quickly becoming a fan favourite, and winning the organization’s triple crown of the Television, Tag Team, and World titles. He counts his time teaming with Cactus Jack (Mick Foley) as being a highlight of his career.

Whipwreck also spent time with WCW, debuting at their “Uncensored 1999” pay-per-view card against Billy Kidman. The match got high marks from a lot of analysts (including a 10/10 by our own John Powell), but Whipwreck was soon demoted to working WCW Saturday Night. He says that backstage politics that kept him down in WCW after the performance at Uncensored. “You stole the show, you’re done. That was it,” Whipwreck said. “That was the end of me.”

Whipwreck’s stay in WCW wasn’t long, and he soon returned to ECW, where he joined up with the Sinister Minister and current WWF star Yoshihiro Tajiri.

Whipwreck has enjoyed his career, working with people like Cactus Jack, Tajiri, Steve Austin, and the Sandman. One of the best parts of his career was, “just meeting a lot of people. It was really cool.”