A Wrestle Kingdom 13 press conference featuring IWGP Intercontinental Champion Chris Jericho and the leader of Los Ingobernables de Japon Tetsuya Naito started as a war of words and ended as a brawl with Jericho promising that their match at Wrestle Kingdom 13 would be Naito’s last.

Natio started things off by mocking Jericho, trying to get under his skin by saying he couldn’t believe the superstar was spending his precious, valuable time travelling all the way to Japan for a press conference.

“The bottom line is you are not as big as a name in this business as I am. That’s fine. It doesn’t matter who I have beat. The legends that I have beaten don’t matter. All that matter is I beat you at Dominion to become the IWGP Intercontinental Champion and that bothers you,” Jericho said ridiculing Naito.

The translator in attendance questioned Jericho as to why he initially refused to give Naito his rematch at Wrestle Kingdom.

“When I beat Naito at Dominion he went to the back of the line but then NJPW tells me you have to face Naito at the Tokyo Dome for a rematch. I don’t have to do anything. I can do whatever I want. I don’t have to show up. Who cares? I can do anything. I am Chris Jericho but Naito continues to talk. He continues to be that buzzing little fly,” said Jericho. “You annoyed me and pissed me off enough to where I will do the match just to teach you a lesson and to teach NJPW a lesson. Nobody controls me! NJPW does not control me! Harold Meij do not control me! I do whatever the hell I want! What I want to do is squash Naito like the little bug that he is at the Tokyo Dome and shut him up for good!”

Naito suggested Jericho was over the hill as a wrestler.

“My opinion about you is you are past your prime already. I lost to a guy who is already past his prime,” said Naito pointing out that Jericho hasn’t wrestled very much lately and the only reason NJPW is still interested in working with him is because he is the IWGP Intercontinental Champion. Naito doesn’t even want the championship. He just wants to take it away from Chris Jericho and along with it, any interest NJPW has in Jericho.

“You are not an attraction any more. You are in the ring because you have the belt,” Naito said pledging he would bury Jericho at Wrestle Kingdom 13.

“Past my prime I am still a thousand times better than you! You are a stupid son of a bitch! I am going to shove it (the championship) down your f—–g throat at the Tokyo Dome!” said Jericho getting to his feet.

Naito stood up spitting water in Jericho’s face. The two superstars started brawling with Naito mocking Jericho telling him to be “tranquillo” or to be quiet, calm and cool. 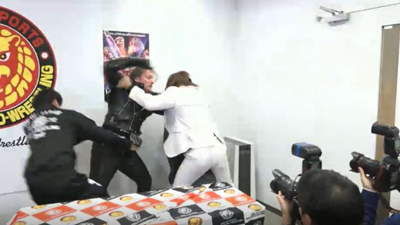 “Everyone that has a ticket for Wrestle Kingdom 13, save that ticket. It will be always known as the last show that Naito ever did. You can frame it and put it on your wall and say I was there the night Chris Jericho retired Naito,” Jericho told the press after Naito was escourted from the conference room.