It’s not often that the mother of a professional wrestler gets a mention, but Judy Copeland, who was the single mom who raised “The Rated R Superstar” Edge, was often a subject during her son’s interviews with the media. It was no different on Tuesday, when Adam Copeland announced that his mother had passed.

Today I lost my mom. Judy Copeland aka The Judemeister. The only parent I’ve ever had. She was my rock. The backbone and bedrock that kept my balance through some very tumultuous years. She never doubted me. Ever. I wanna be a wrestler Ma. “Do it.” She scraped together our pennies and kept me fed and clothed and even managed to get me those Kiss action figures and Wrestlemania tickets. Somehow. Because that’s what she did. She supported me and bred me to be the man I eventually became. Took some elbow grease, but I got there. A point where she knew I was going to be fine. I found an amazing partner and I’m the father to two beautiful little girls. I lived my dream and continue to do so because she watered me and let me blossom. She did her job. But I wish she could have stuck around to see the fruits of her labor longer. To the very end she showed me where grit comes from. From your heart. Your spirit. Your mana. Your flame. Your spark. Your soul. I can honestly say I don’t know anyone who had more. She’s free now, and even now thoughts of her make me smile. That’s a life well lived. “Hey Jude, take a sad song and make it better…” You always did.

Judy Copeland raised her son, Adam, in Orangeville, Ontario, a small city a little more than an hour northwest of Toronto. Much of the story is documented in his autobiography, 2005’s Adam Copeland On Edge.

Just six years into his career, Adam Copeland, a rising star as Edge in WWE, sat down with SLAM! Wrestling’s John Powell in 1999 for a question and answer session, and stressed how his mother made it all possible, not just financially: “I was bailed out by my mom numerous times. Those are all important factors but just don’t think it’s going to happen overnight. I’ve been doing it for six years now and it took me four which is short in our business. A lot of guys don’t make it in four years. I’m pretty fortunate. Most guys have to cut their teeth a lot longer than that. That’s my advice.”

Powell followed up the questioning, revealing the impact Judy had on Adam:

You mentioned the support of your mom. She must be some kind of lady to put up with that kind of stuff.
– John Powell (SLAM! Wrestling).

Edge: Definitely! (laughs) But from Day One she knew that I wasn’t going to give up on this. She thought…I’m going to support this kid because in the long-run it’s going to pay off for him. I can just think of times where I’d be miserable, not making any money. I remember being stranded in Tennessee. Christian and I were down there. We had enough money each day to buy a hamburger. So, that was our meal for the day. Eventually, we were told we’d have eighteen shows. It worked out to three. We had to go around and get ourselves booked. This guy said he was going to book us on a bunch of shows and he didn’t have any.

So, we were stuck. We had no way back home and no money to our names. I called home and said…Mom. I don’t know what I am going to do. She said, Okay. Hold on. She put what money she had in the bank and we did a 36-hour bus ride home without shaving, eating or showering. Christian and I looked pretty rough at that point when we got home but it was nice to get there.

Man! Your mom must really believe in you!
– John Powell (SLAM! Wrestling)

Edge: It means a lot. The good thing is for all of my matches, she always been there. Locally, she always there. My first show in Copps Coliseum against Bob Holly. She was sitting in the first row. So was Joey Legend. So was Christian. So was Zack Wylde. So was El Fuego. Now, my girlfriend’s up in the box with my mom at all of the SkyDome shows. It’s a very cool thing.

So on April 12, 2011, when Edge retired completely from professional wrestling for health reasons, he made sure that his mom was flown down to Albany, NY, for the Smackdown show, where he laid the championship title down in the ring. 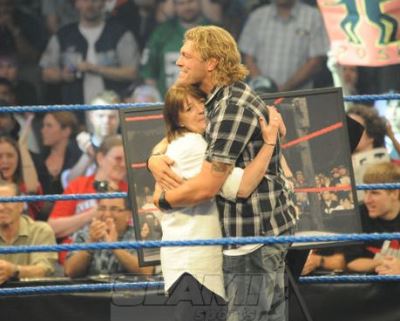 Later that year, in September, WWE held an Edge Appreciation Night at Toronto’s Air Canada Centre, and there was Judy hugging it out with her son in the middle of the ring for an emotional moment.

Ron Hutchison was one of Edge’s trainers in Toronto — a young Adam wrote an essay to get a training spot — and shared his memories of Judy Copeland.

“My heart aches upon hearing the news of Judy Copeland’s passing. I don’t believe that there is any bond greater than the bond an offspring has for their mother and I’ve never seen a tighter, more loving bond than the love shared between Adam and his mom,” said Hutchison. “My thoughts and prayers are with Adam, Beth and their wonderful family at this time. May they find comfort in the cherished memories that they hold so dear.”

In a column on his website following Edge’s retirement, Lance Storm wrote about Judy as well, a fitting finale: “his mom (if I can borrow an old Edge-ism) still very much reeks of awesomeness.”