Recently WWE worked with wXw in Germany to discover new talent. “We are making progress every day. The tryout in Germany was very successful for us. A lot of athletes came forward that have experience and many that don’t. They have a gift or a natural propensity to being good at what we do. Only time will tell, obviously,” said Paul “Triple H” Levesque, Executive Vice President of Talent on a November 14th media conference call. 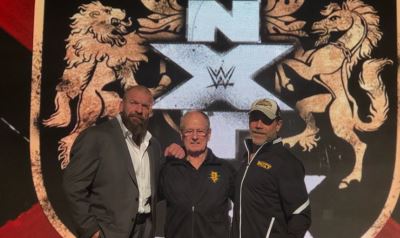 The WWE has had a strong hold on wrestling for decades and aspiring wrestlers have to deal with the lack of spots available in the WWE. “The ability to build a pipeline as I’ve said many times around the world, to have a path to get to the WWE, to get to a point in your career where you can be successful and lucrative without the risk without the hustle, without the inherent issues that going along, and I don’t mean this as a knock, but with the independent side. ‘Am I going to get paid? When I show up in the ring, is it broken? If I do get hurt, is there a doctor or a paramedic even there? What are the things that are the basic necessities?'” said Levesque

“Trying to create systems around the globe with the promotions that are doing things the right way, the meaningful way, that are cultivating talent that are helping them to grow and become something more. Long term, my goal would be to have this around the globe.”

“To have a career if you never make it to Raw or Smackdown, if you never make it to that level, that you can have this successful long term, long career with some security to it, with your health in mind. All those things that come along with it. I think we are pretty far down that road. What’s happening in the UK (NXT recently launched a UK show on WWE Network), that’s a little bit of a more mature market so it’s happening a bit faster. You are going to see them coming up around the globe. It won’t be that long. I think within the early part of next year we will be making some big announcements on different markets that I think will be very impressive to people and to be able to train people around the globe that has that path and career for them, it’s very important,” said Triple H.

However, it will take time to build the NXT UK brand among the other brands around the world and scale them to the level of the current NXT brand. “For me it would kind of be replicating what we are doing here in a way with NXT. If I was to just look at it as a U.S.-based product and say, ‘Here’s how we run it in the U.S. and do something similar over there.’ The first thing you have to do is get the product on the air, get people accustomed to what it is. The buzz on the brand has been extremely positive. People are happy with the show and the talent in the show,” said Levesque.

It’s unknown when NXT UK will be ready to run live events but what is known is that Levesque won’t rush the growth of the new brands. “I don’t want to run live events just to run live events, and they’re not great, they’re kind of half there and half not there. It’s a process of getting it into the right place where people are excited to see this, there’s a desire to see it. We’ll build it up to a functional brand with a group of talent that are on the ground there training in a facility there. Much like we are doing here. Replicating the system in various parts of the world.”