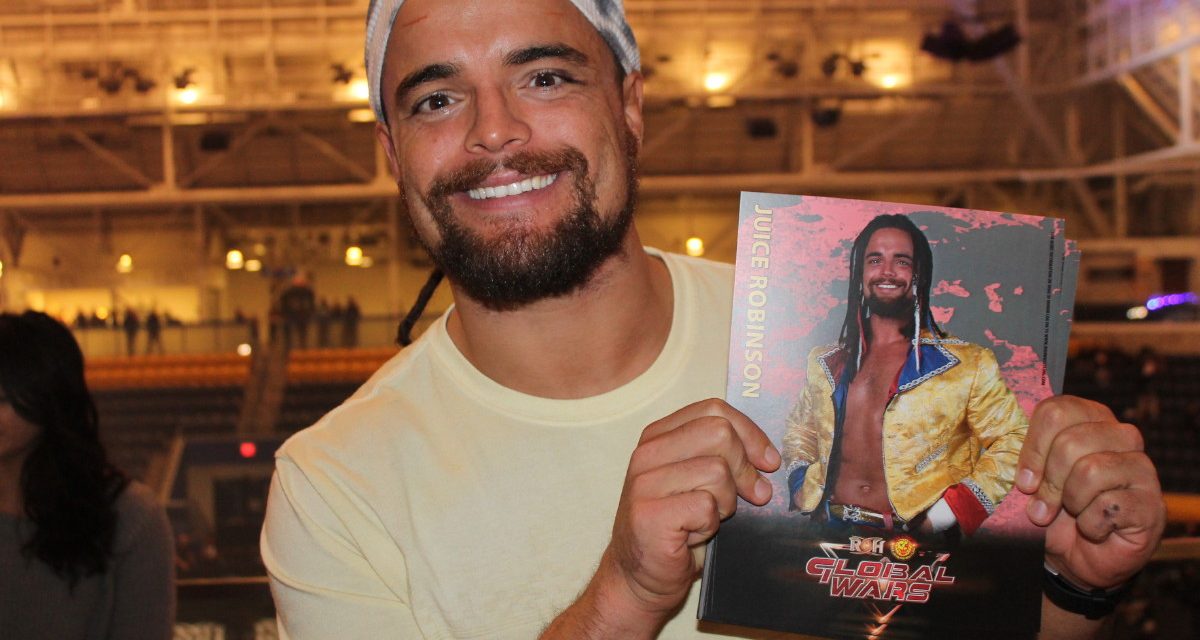 Being honest, Juice Robinson never thought he would work in Japan, let alone star, but that is exactly what has happened as he has become one of the top gaijins in New Japan Pro Wrestling.

“I didn’t ever think I was going to work in Japan, man. I definitely didn’t think I was ever going to be a Japanese pro wrestler,” Robinson told SLAM! Wrestling prior to the start of the the Ring of Honor Global Wars show in Toronto on November 11th. “I grew up wanting to be a WWF superstar. I thought Japanese wrestling was all strong-style, a thousand forearms, getting dropped on your head, feel no pain, and everybody’s wearing black boots and black trunks, and everybody’s a bad-ass. I just didn’t think I would jibe well in that atmosphere. I’m jibing pretty well over there, so I was wrong.”

Robinson didn’t exactly race up the card, starting as he did at the bottom as a young boy/young lion, but NJPW lets its talent take time to build a reputation and to get over, and that’s what he’s done. “I’m just on the ride, having fun.” 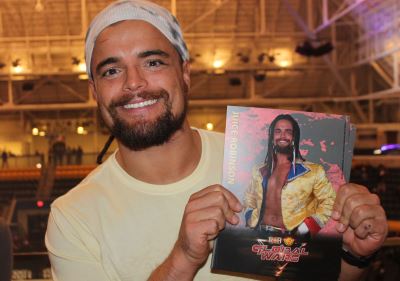 Juice Robinson has a photo to sell you! Photo by Greg Oliver

He stands out in NJPW for reasons beyond his 6-foot-3, 220-pound frame. There’s his outgoing, loud personality and colourful clothes, and his in-ring style has a lot of flare to it. But there’s also the hair, the long dreadlocks that are extremely unique in the mono-culture of Japan; the significant female fanbase in Japan seem to like him for all those reasons and more.

After beating Trent Baretta in a hard-fought bout, Robinson took to the microphone, and, in his Sam Kinison-like screaming voice, challenged Cody: “I hope you get better soon, because I’m coming for that title.” 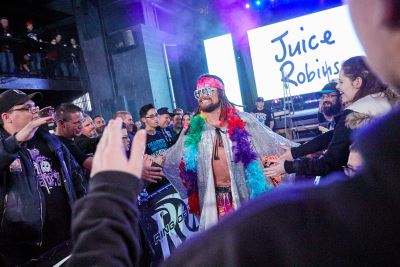 Robinson was on the ROH show in Buffalo where Cody tweaked his knee, but didn’t know that he had gotten hurt. Robinson was asked, what kind of an awareness do you have when someone is hurt in the ring?

“Well, I know when I’m hurt, pretty much. Actually, I sometimes don’t know even know when I’m hurt until afterwards,” he began. “Usually the referee keeps tabs on that pretty well. My tag partner’s been hurt before. In fact, I was in a match with [Matt] Taven once … and he got pretty hurt, he got dropped on his head in Mexico. It gets relayed throughout the ring pretty fast. But sometimes, some guys when they get hurt they don’t say anything, they just try to get through it.”

There’s a consideration of others factor, said the 29-year-old Robinson. “Maybe that guy doesn’t know how hurt he is and he doesn’t want to panic everybody else.”

Joseph Ryan “Juice” Robinson got his initial training in pro wrestling at Truth Martini’s House of Truth, and debuted in 2008. He landed a WWE developmental deal in 2011, and worked as CJ Parker in Florida Championship Wrestling and NXT until March 2015, when he asked for his release. Essentially, he didn’t feel like he’d ever make it up to the main roster, his NXT gimmicks — eco-warrior? — stifling his creativity.

He inked a deal with New Japan not long after leaving NXT/WWE.

In the three years he’s been there, Robinson said he can feel the growth of the company, and the change because of the New Japan World streaming service.

“I was just telling a guy earlier who came up here and he had a poster from Destruction in Kobe, last year when I wrestled Kenny [Omega]. It made me realize and remember that I’ve been seeing way more foreign, gaijin fans, at these shows. Korakuen (Hall), there’s always one or two or three, and you can spot ’em right away, foreigners, that are coming from America, just to come to a New Japan show,” he said. “And January, there was tons and tons of foreigners in the crowd. It is definitely getting hotter and people are diggin’ it, because it’s that old-school wrestling. It’s not so much sports entertainment, it’s old-school pro wrestling.”

Also on that January 2018 New Japan swing was one of his heroes. “Chris Jericho was a huge influence on me, and I got to meet him and have a couple of drinks with him,” said Robinson. “I do find myself marking out, I do mark out. I try not to. I may feel like, ‘ugh’ afterwards, like, ‘Oh God, why did I ask him that? That was the weirdest question!’ I try not to be a mark.” Robinson was also a huge fan of Stone Cold Steve Austin and Shawn Michaels growing up. 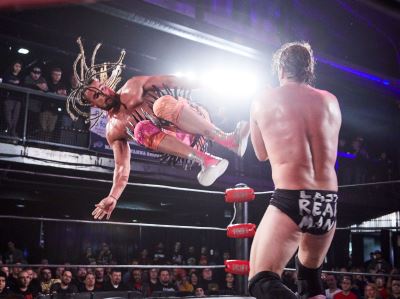 Juice Robinson — and his hair — dropkicks Silas Young in Buffalo on November 9, 2018. Ring of Honor/Andrea Kellaway

Robinson doesn’t work a ton of dates in North America. He pointed out how wrestling differs from one location, like a Ring of Honor ring, to Japan.

He is not, however, to the point of fellow gaijin like Kenny Omega, who is fluent in Japanese. Robinson called his mastery of a second language “pretty good. I can order a beer, I can order a beer easy — one beer, two beers, I can order good in alcohol. I’m pretty good, I can be polite, ‘Hello,’ ‘Goodbye,’ ‘Nice to see you again,’ ‘I miss you.’ I’ve got, I’d say, a 50-word vocabulary, which isn’t very good at all.”

Like mixing in gaijin with Japanese wrestlers, there’s a way around the language barrier. “But I can use those with easy English, and mix it together. … broken Japanese with broken English together, it works, it’s effective.”

And so is Juice Robinson.

— with files from Don Davies