There’s a film currently being shot to honour the legacy of Owen Hart, done with the cooperation of his family. The documentary is simply called Owen.

Keaton Stone is the key figure on the film and it’s being put together by Curate Films, a production company based in England.

“It is official now as Martha [Hart, Owen’s widow] has posted it on The Owen Hart Foundation blog and I also have a Twitter (@owenhartfilm) that I’m trying to use to raise a bit more awareness and to hopefully find people who knew Owen during his life – grew up with him or wrestled with him — were superfans of his, etc. — and might have any memorable stories and especially any photographs or video footage of him,” Stone told SLAM! Wrestling via email.

The key is the family, said Stone. 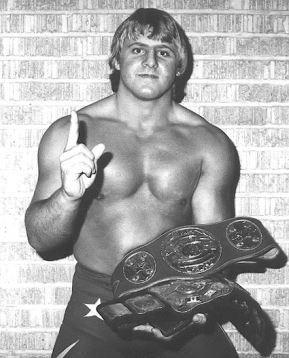 Owen Hart as a champion in Stampede Wrestling. Photo by Bob Leonard

“I have Martha’s entire home archive — hours and hours of footage and all her photos — but I’m trying to find as much as possible for the film to be as amazing as it should be in honour of this incredible man,” he said.

Stone has Mick Foley scheduled for an interview and is off to Japan to collect more footage.

It’s “all looking very positive so far,” said Stone. “I just need to raise the awareness level a bit more and also find some amazing people / stories from around the world so that the film can contain a real international flavour.”

A release date for Owen is still a ways off, though the aim is to coincide with the 20th anniversary of Hart’s passing. This is the first feature-lengthy documentary on Owen Hart and his accidental death in May 1999, in Kansas City, Missouri. The Life and Death of Owen Hart, done by Paul Jay, who also was behind the lens for Hitman Hart: Wrestling with Shadows, came out for a television audience in late 1999.