The WarGames match is becoming a yearly event at NXT to give the brand its own unique identity. NXT TakeOver: WarGames takes place on Saturday at the STAPLES Center in Los Angeles. Triple H gave his thoughts on the event and responded to criticism during a conference call Wednesday.

“WarGames has a special place for me. The creation of Dusty (Rhodes) and what I feel is a great match this year. This is the year that we are going to show that this is going to become an epic yearly event. With the talent that are in there it’s easy to see how good it’s going to be when you put talent like Ricochet, Pete Dunne, and War Raiders against the Undisputed Era. It’s bound to be something special and I can’t wait to see that go down,” said Paul “Triple H” Levesque, WWE’s Executive Vice President of Talent. 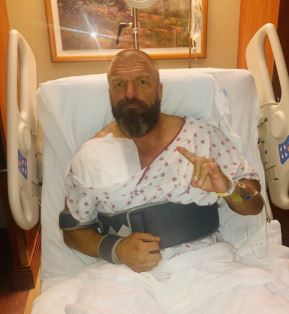 Triple H tweeted out this photo after his recent surgery for a pectoral muscle.

Another match that fans are looking forward to is Tommaso Ciampa vs. Velveteen Dream for the NXT championship. “You could make an argument that every single thing on this card could be the main event. Whether it’s WarGames, whether it’s the NXT championship. It’s hard to put a statement around how good he (Velveteen Dream) is at his age and how new he is, and incredibly bright. Tommaso Ciampa is just coming into his own. Last year, he was probably one of the best heels in the business, in my opinion,” said Levesque.

He also addressed the two other matches on the card:

– “Aleister Black and Johnny Gargano is epic story telling. We had to roll with the punches on some things with an injury” — Black had a groin injury that required surgery — “and getting into the ‘who done it’ and what it took to get to this. I’m really happy with how that story played out, and I feel like the momentum behind that and the anticipation for that match between those two and given the talent that are in there, it should be incredible.”

– “Kairi Sane vs. Shayna Baszler in a 2-out-of-3 falls match for the NXT women’s championship have hit it out of the park every time they have been in the ring, in my opinion. So, I’m excited for this,” said Triple H.

Since there are only four matches at NXT TakeOver: WarGames, some of the impressive talent will not have the spotlight on them. Matt Riddle, Keith Lee, EC3, among many others will not be featured on this card. Some critics have argued that there is not enough depth in this year’s event.

Levesque responded to this criticism, “WarGames just takes some time. The match itself doesn’t start until everybody gets into the ring and it just takes time to get into. You have to give that match more time. As we got into the 2-out-of-3 falls match with Shayna and Kairi that takes more time. I don’t want to ever get into a format where we go ‘its got to be five matches’ or ‘its got to be six matches’ and here is the allotted time. It’s a gut thing. We meddle around and think of what will be the best overall experience. Could we add in another match? Yeah, but you run the risk of it being a bit long and does it add to it or does it subtract. So, it’s a judgement call. We all collectively agreed to where we are now but we will see if we are right or not.”

In addition to NXT, Triple H addressed his injury status following a pectoral muscle during his bout at Crown Jewel in Saudi Arabia: “I had surgery a week ago yesterday. Everything is feeling good, in an immobilizer and on the road to recovery. Just rehab, rehab, rehab now and I will be back. This does not stop this machine from rolling on.”