LIVONIA, Mich. — EVOLVE has, well, evolved and now has a working involvement with WWE, using stars from its 205 Live show and NXT roster on its recent run of shows throughout the Midwest. SLAM! Wrestling caught up with EVOLVE star DJZ, who took on Mustafa Ali, after EVOLVE 115.

DJZ has been around the wrestling scene for more than 14 years, starting his training at the age of just 17. He’s regularly competed in promotions down in Mexico, starting with the name Shiima Xion in 2008, and most notably has been with Impact Wrestling since 2011. There, he has been known as Zema Ion, and has been a staple in the company’s X-Division, winning its title twice. He transitioned to the name DJZ as part of the Bro-Man’s tag team in 2013, and has carried that moniker ever since. Just last year though, DJZ suffered a fractured colon from taking a 450 Splash in Mexico, which left him in major debt and at high risk of death. DJZ pushed through this life-changing event, and is still a must see performer for both Impact Wrestling and EVOLVE.

Here’s a transcript of the interview:

SLAM! Wrestling: Tonight [November 9, 2018] at EVOLVE 115 you faced 205 Live’s Mustafa Ali, in which some would call a dream match. How do you feel it went? What were your thoughts about this match?

DJZ: I felt like the bases were loaded and I hit a grand slam tonight. I didn’t win, but to me, there was a lot on the line. My Impact Wrestling contract is up in one month, and my intention is to be a free agent — and I haven’t been a free agent in seven years. So an opportunity like this where I’m wrestling one of the top cruiserweights in the WWE right now — Robbie Brookside, a coach at NXT is here watching; I’m sure people at WWE were watching as well — so I felt like it was a big opportunity for me, and I needed to have a good match. I needed to have the best match that I possibly could, because once I’m a free agent, who knows what could happen, you know? And I didn’t wanna look a step behind Mustafa Ali, and I don’t think I did, and I think I proved tonight that I could hang with your best cruiserweights, and we’ll see what kind of doors that could potentially open in 2019. 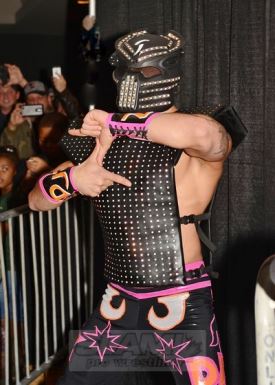 DJZ is decked out heading to the ring.

SLAM! Wrestling: At the last EVOLVE 114, a new EVOLVE was introduced where NXT developmental were put in the main spotlight, with names such as The Street Profits and Fabian Aichner. What are your feelings towards this new direction of EVOLVE? Is this a good or bad thing for you?

DJZ: No, it’s great because it’s a thing that sets EVOLVE apart from other independent companies. Like now EVOLVE isn’t just an indy with the same talents that you see on every other indy. Now they offer something that you can’t get anywhere else. This is the only place where you’re gonna be able to see NXT guys, developmental guys, mixing it up with current independent stars, so it’s a totally unique concept. And it gives the guys at the Performance Center that maybe aren’t wrestling on television every week, and need those reps in front of a live crowd… it gives them a chance to have that. So, I think it’s good for them, it’s good for EVOLVE, it’s good for wrestling in general.

SLAM! Wrestling: What is it like to be able to represent the Filipino culture, when the indy wrestling scene in the Philippines is only starting to grow, however here in the West, it’s able to be showcased with names like TJP and yourself?

DJZ: There’s a few, there’s me, there’s TJP, Batista, Jeff Cobb, Shotzi Blackheart — who was on the show tonight — there’s a few of us out there — Robbie Eagles from Australia, I found out he’s Filipino too actually. And it’s cool man, like the Filipinos, they are very supportive of any Filipino that’s doing big things, and yeah, I hope that someday I’ll get to go there. And I hope that maybe what I’m doing, what others are doing, will inspire more Filipinos to get into wrestling, and create like a big scene, you know, kind of like the Japanese wrestlers, Mexican wrestlers — hey, maybe Filipinos will be the next type of wrestler that you see coming out regularly. 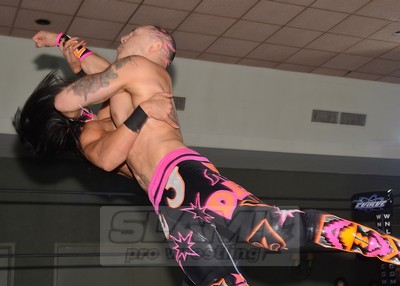 SLAM! Wrestling: Last year you had a very bad injury over in Mexico concerning your colon, which put you on the shelf and almost killed you. What goals or motivation do you have that drives you past that accident?

DJZ: I just think that… that injury should’ve ended my career — should’ve ended my life. So why is it that it didn’t? You know, why am I still here? Why am I still able to wrestle at a high level? In my opinion, it’s because there must be something left for me to achieve in wrestling. My work is not finished, and whatever higher power above is letting me know that. So it’s like, “All right, I just gotta keep going, and see what that reason is. Why am I still here? There’s gotta be something left to achieve. What is that something?” And I’m just gonna keep going as hard as I can, working as hard as I can, until I find out what that something is.