The Rock picture book detailed but not in-depth

When I scribbled down some words, “detailed but not in-depth,” to describe the latest tag team between WWE and DK Books, The World of The Rock, I made a note to myself, “if that makes sense.” You see, there’s plenty to like and revisit from “The Great One’s” career, but you aren’t going to walk away with anything more than a superficial understanding of the wrestler turned movie star.

The World of The Rock is half photo album, half factoid, like many DK Books, akin to infotainment in a way. Writer Steve Pantaleo, who doubles as WWE’s Global Publishing Manager, is the man who put the words together, and no doubt an army of worker bees collected all the various photos.

Since this is the first WWE book on The Rock since the puzzling The Rock Says… from 2000, written with Joe Layden, which was half real and half in character, there is naturally a heck of a lot more to talk about. For one, The Rock became the biggest movie star in the world, though an Oscar nomination has escaped his grasp to date. He also has come in and out of WWE, particularly around WrestleMania time for the bigger payday, and to give a little rub to his extended family, like Nia Jax, Roman Reigns and the Usos.

The good news is that the book covers all of that and more. 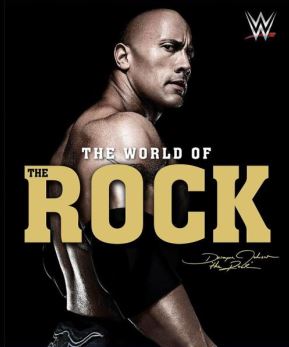 From his early days right through to recent appearances, it’s like a joyride through The Rock’s lows, as when his football career dovetails, to the highs of being the most electrifying man in sports entertainment.

Honestly, it’s perfect for today’s fan who didn’t see him back when … when Stone Cold Steve Austin and The Rock were massive stars, the kind WWE has not seen since.

Rocky got a push almost from the get-go in WWF/WWE, so there’s little need to dwell on his indy life like there would be for most of the interchangeable roster today of outstanding athletes who only have maybe a quarter of The Rock’s charisma. He was indeed a blue-chip prospect, who spent a little time in Memphis as Flex Kavana — and there’s some great photos from that — before making his WWF debut. Heading into WWE’s archives, the initial sketches for his outfits as Rocky Maivia are shared.

If obscure facts are your thing, that’s covered, like the first time he delivered a Rock Bottom on TV (on Savio Vega, on Aoril 20, 1997) or his first singles victory (over Salvatore Sincere, November 25, 1996).

Other stats are calculated too, like his win-loss record at WrestleMania and how many minutes he’s spent in the ring on pay-per-views. The bigger question is, will those numbers be out of date soon? For ratings purposes, I’m sure WWE is hoping so.

But, of course, The Rock has always been about what he says more than what he does in the ring, and reading quotes and catchphrases is all well and good, but I’m betting you’ll head to YouTube or the WWE Network to listen to him as the words continue to ring around in your head.
It’s broken down into four sections:

– Who is The Rock?… about growing up and family.
– The Rock’s Early Years… from football to his beginning in pro wrestling.
– The People’s Champion… his entrances, the Attitude Era, quotes.
– The Great One… others on The Rock, movies, staying in shape.

Sprinkled throughout are pages featuring rivals and allies, and a few key matches. As with the lingo, you’ll find yourself hunting down a match or two to watch, again or for the first time.

There’s very little I would call revealing, never before said, other than, say, a recent workout playlist to continue to stay in tip-top shape for movie stardom.

Are there things missing or wrong? Of course. I don’t understand why his entire extended family can be listed, including the “blood brother” relations in the bigger Anoa’i family, but not mention his truly-related uncle, Jay Bowles, who wrestled as Ricky Johnson starting in 1978 until a decade or so ago. The young deaths of many of the Anoa’i family, like Yokozuna, Umaga and Gary Albright are not touched on either. Marriages and kids aren’t a subject either. Wouldn’t it have been cool to have had more about his grandmother as a wrestling promoter too?

In the end, it’s a WWE-approved, sanitized version of The Rock’s public life, which is all we’re going to get for a while, so enjoy what WWE and DK Books cooked up in The World of The Rock.