Creating the Mania book is terrific, for now

“Unparalleled access” is a term often thrown around by publishers hyping how the author got to interview many, many people, some who aren’t often heard from in print. It’s a suitable way to describe Jon Robinson and his Creating the Mania, which details the road to WrestleMania 34.

I’ll admit that I went into Creating the Mania: An Inside Look at How WrestleMania Comes to Life with a jaded eye, expecting the usual overzealous WWE hype and pandering that often can leave a huge distaste in the mouth of a cynical (er, smart) wrestling fan.

But I was pleasantly surprised. Robinson really did get to talk to a large variety of WWE stars, and even a few behind-the-scenes people. It’s not exactly a complaint, but more of a warning — every quote seems to go on forever, editing down not in anyone’s mind apparently.

It’s what’s there, though, that is interesting. There’s swearing, for one thing. Other promotions, like TNA, Lucha Underground and Ring of Honor are mentioned, and John Saboor, WWE’s Executive Vice-President of Special Events even references the “non-WWE” events WrestleMania week. Insider terms like “chicken heel,” “real heat” and “smart fan” are used repeatedly; the flipside is that there are too many “instant classic” matches. 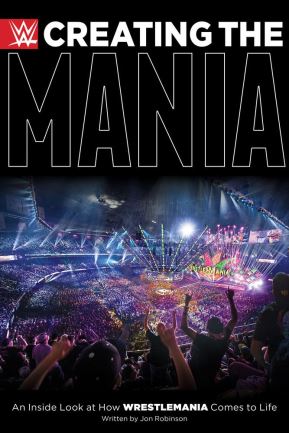 You know what you are getting with a WWE book in general — it’s not subjective and balanced, it toes the company line with its own attendance numbers, its money count for revenue generated in the Mania cities, without anything questioned or independently attributed. So I can forgive some of the oversights and eye-rolling that results because there really is so much unparalleled access.

Some of my favourites:

– I have a lot more love and respect for Ronda Rousey now, learning a lot more about her journey to WWE stardom. For one, she actually trained for pro wrestling outside of WWE and its Performance Center, which is not a fact that WWE has publicized, that’s for sure. Her love of the business comes through and seems really genuine.

– Sami Zayn’s insight into being a heel for the first time in his career, and the complicated save of Kevin Owens that got him into that role, saving him from a flying Shane McMahon outside the ring, is detailed.

– The most revealing chapters, to me, were the ones on Ed Koskey, WWE’s Vice President of Creative Writing, and a similar one where “Road Dogg” Brian James talks about his move from being talent to being part of the creative team. I also enjoyed the aforementioned Saboor talking about all the work that goes into selecting a venue for WrestleMania, and then getting to the actual show. A chapter near the end which talks about the actual set-up of the Superdome was fascinating, though could have benefited from some unique graphics, like sketches, and stats, like how much pyro was used. (If there’s a sequel, I’d love to hear from the seamstresses, hairdressers, pyro people, cameramen, and others that help put a show together under great stress.)

But at its core, Creating the Mania takes the reader through 2017, talking to individuals involved in various key events, into 2018 and Mania 34 in New Orleans.

This is where I see a pretty significant flaw.

While this book is great now, while everything is really fresh in our memories, I don’t see how it’ll age well. By omitting any sort of deep background on both the wrestlers themselves and the storylines, someone reading Creating the Mania in, say, six years, is going to be mighty perplexed. There isn’t even a run-down of the WrestleMania 34 card itself.

It doesn’t even age well when some of the characters are profiled. Jason Jordan is called the “next big thing” before his injury, and Kurt Angle claimed his “son” was one of the top five in the entire industry; as much as I respect Jordan’s talent and potential, I can’t see that label as anything but a ridiculous case of overhyping.

Something as simple as putting captions on the photos would have helped it age better too. There’s a photo deep in the book of Jeff Jarrett, and the context being his WWE Hall of Fame induction. One of the photos they chose to use, however, was Jarrett with a leg lock on Mae Young with Debra McMichael and Stacey “The Kat” Carter egging him on. Now, I know who they are, but a younger WWE fan would have zero idea.

In conclusion, Creating the Mania is a treat, very readable, with some terrific insight into the storylines of the past year. It just might not mean as much in a few more years.