Scott Norton, a near-30-year veteran, is heading to Winnipeg this weekend to share the things he has learned over the years, sign some autographs, and bust a few heads.

Then on Saturday, September 22nd, also at Rookies Sports Bar, he’ll be conducting the seminar, with a 3 p.m. starting time. 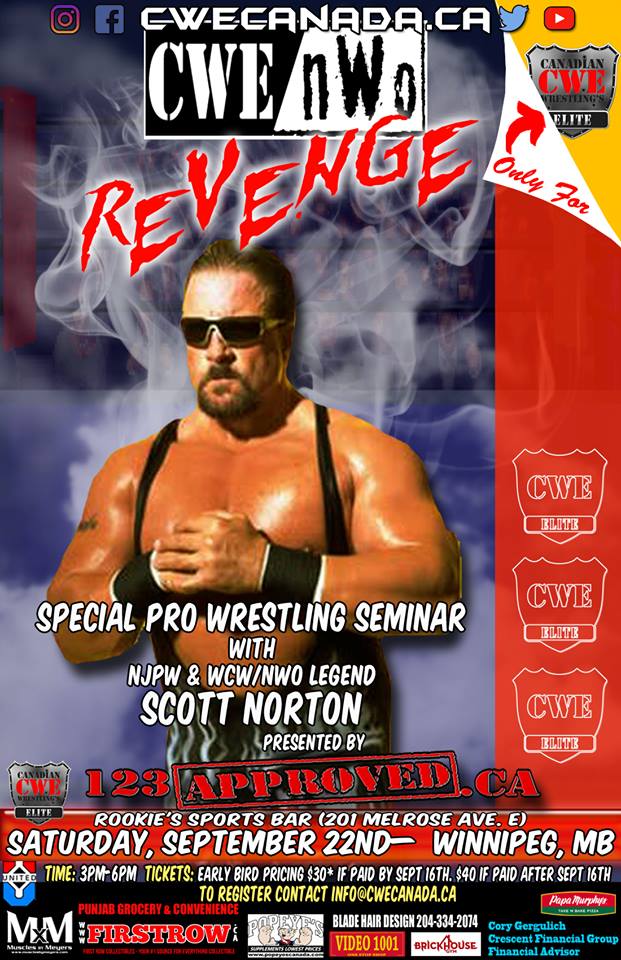 Over the phone with SLAM! Wrestling, Norton explained that his goal with the seminar is to help as many people as possible by sharing the things he has learned over the years.

“When I first started, a lot of veterans helped me,” Norton recalled. On his first night as a wrestler with the American Wrestling Association (AWA), Norton wrestled four matches, all of which would be taped for later shows. Norton was still very green — a term used to describe a novice wrestler — and was worried his matches wouldn’t be good. Luckily for him, Norton got help from Baron von Raschke, who helped him by pointing out what he did well and what he needed to work on.

Raschke worked with Norton for his remaining matches that night, and worked with him directly for six months afterwards. Each match was an improvement on the one before it, and Norton grew as a performer.

Now, things have come full circle, as Norton hopes to do the same to the next generation of pro wrestlers. “Ever since that night, I’ve always shared whatever I can with younger guys, because it’s like passing the torch.”

Norton debuted in wrestling on April 15, 1989, having been trained by some of the greatest minds of the era. Two of his most influential trainers were Brad Rheingans (who also trained both Brock Lesnar and Big Van Vader) and Masa Saito, the latter being responsible for ‘handling’ the American wrestlers in New Japan. He was also the biggest influence for Norton as a wrestler.

“Masa took me under his wing. I was so fortunate to work for him, and was fortunate to wrestle him for his retirement match. For me, that was bigger than winning the IWGP Heavyweight Championship.”

Norton’s experiences in both North America and in Japan have made him one of the most skilled and dependable wrestlers of his day. He wrestled mainly for New Japan Pro Wrestling for many years, wrestling on countless tours while working in the infamous Japanese strong style. That type of wrestling is much more taxing on the body, and is far more intense than what’s seen in most North American promotions.

“[New Japan Pro Wrestling] is a hard place to work. You take a beating. The impact is heavy and hard. We could put a guy in a coma.”

But despite all the pain, Norton still worked as hard as he could and wrestled countless matches in Japan over the years. He got to compete with some truly phenomenal performers during the 1990s, which was one of the biggest boom periods in Japanese wrestling history. Some of Norton’s biggest matches were in tag team affairs, particularly his wars with the Steiner Brothers, Scott and Rick. This rivalry of theirs even led to them main-eventing a NJPW show in Budokan Hall, the first to ever do so.

But these weren’t the same sort of tag team matches as seen mainly in WWE or WCW; Japanese promotions like NJPW hold its tag belts in high regard, especially since wrestlers took part in tag matches more often than singles competitions.

Outside of the tag division, Norton was a successful singles wrestler as well. He was one of only seven non-Japanese wrestlers to win the IWGP Heavyweight Championship, and his first win in September 1998 made him the first gaijin to win the world title in a seven-year period. Norton credits his hard work and dedication for that “unbelievable” moment.

“You’ve got to prove yourself a hundred times. You can’t miss matches. You must be available. When they trust you enough to even give you a championship match or even a run as champ, you know you made it.”

Norton’s second run in NJPW came at an interesting time. By 1999, NJPW’s then-owner Antonio Inoki fell in love with the MMA craze that was sweeping Japan, and brought that into his company. When he wasn’t working in high-profile singles and tag matches, Norton also began working on training the next generation of stars. He helped break in several rookies, including Hiroshi Tanahashi, who went on to become the ace of NJPW and one of the biggest wrestling stars in the entire world.

This sort of giving back to the wrestling business brings Norton joy. He was so grateful for what the veterans of his day did for him when he was a rookie, and he loves to do the same for the wrestling stars of tomorrow. This giving back was certainly appreciated by his fellow wrestlers. On the first NJPW show after Wrestle Kingdom 11, Norton was approached by several top New Japan stars, and many of them said to him, “Thanks for paving the way.”

Fans can expect a great opportunity to speak to a true wrestling veteran that doesn’t get to “talk shop” very often. If anyone is looking for advice on how to become a pro wrestler, Scott Norton will be able to help in any way he can.

“I’ll be as honest as I can be,” Norton promised.

Registration is $40. More information on the event can be found here.