One of the many great things about supporting wrestling organizations from all over the world is you get to see future stars in action. Stars who because of their talent and dedication will one day take to the world stage. Stars like Kevin Owens, Lita, A.J. Styles, Juice Robinson thrilled fans world-wide on their rise to fame and fortune. 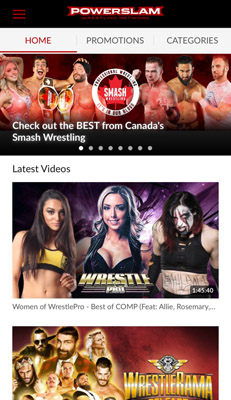 That is the strength of the Powerslam Wrestling Network and what sets it apart from others in the digital streaming marketplace. Featuring wrestling organizations and their events from the world over, it gives you a glimpse at organizations and talent you would never experience otherwise.

Powerslam Wrestling Network is Pivotshare’s service and currently streams 91 promotions and has 2,900 hours of content and counting. There is everything from Defy to CZW to Dubai Pro Wrestling and Smash Wrestling. There are also documentaries on Bruiser Brody, Jim Crockett, Harley Race, roundtable discussions and shoot interviews with Scott Levy (Raven), Adam Cole, Road Warrior Animal and the Bellas.

Spending some time with the app, I immediately gravitated towards Smash Wrestling as they are in my backyard, plus Kyle O’Reilly from the Undisputed Era and NXT was featured. WrestleRama Belfast was worth the watch just to see Jeff Cobb fight Ricochet, Marty Scurll battle Matt Sydal, as well as British Strong Style, take on The Kings Of The North. In fact, if you are a fan of UK wrestling as we are in our house, Powerslam Wrestling Network has everything from Revolution Pro Wrestling and 3 Count Wrestling to British Empire Wrestling. The variety is certainly there. It would take you months and months to get through everything that the Powerslam Wrestling Network has to offer and that is not including the regular additions. The one and only drawback of the service though that I found was that it doesn’t seem to mark what you have watched already or where you left off while viewing a video like other services do.