All In will be long remembered 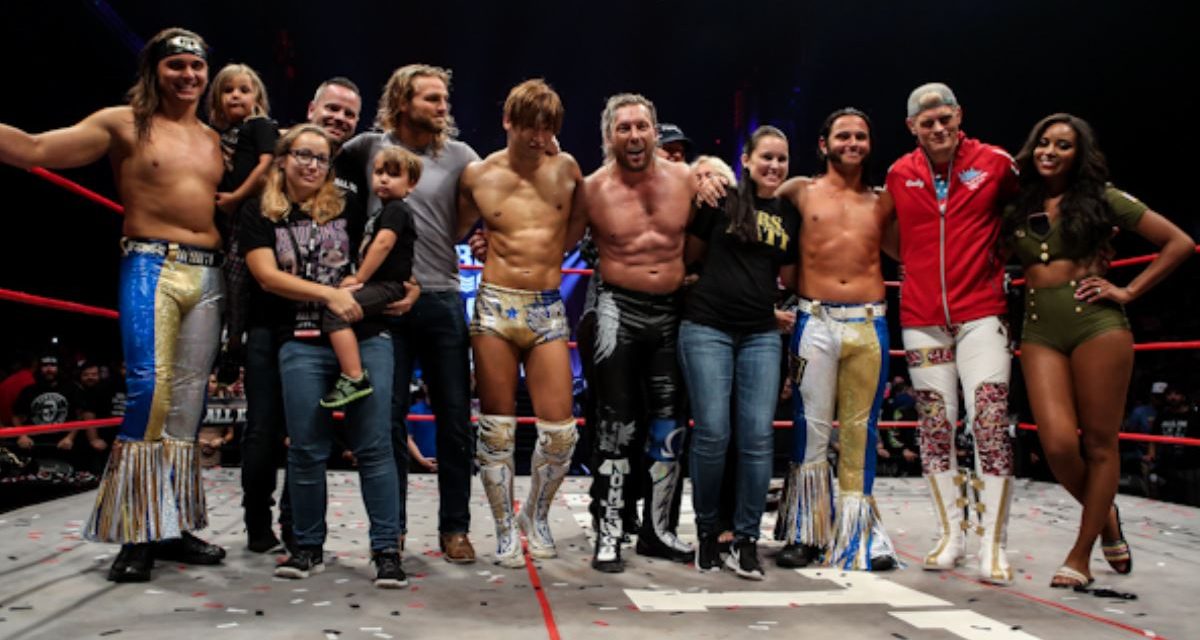 A year ago, All In was a pipe dream. But the brain child of Cody Rhodes and the Young Bucks blew past expectations in front of one of the most raucous crowds in recent memory. 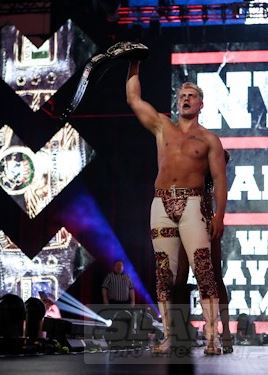 The 10,000-plus fans at Sears Center in suburban Chicago were treated to independent wrestling’s version of an all-star game — and the wrestling business is better off for it.

From top to bottom, All In will be remembered for a long time to come. Those in attendance won’t soon forget.

From my second row seat, All In was the best wrestling show I’ve ever been to, edging out NXT Takeover: Dallas from 2016.

The line to get into the building was outrageous, as fans arrived early in anticipation. Equally as ridiculous was the merchandise line. Despite this, nearly every seat in the arena was filled by the time the first match — a tag team bout pitting The Briscoes against Frankie Kazarian and Scorpio Sky — began.

Now, it’s not unusual for the first bout of the evening to have an enthusiastic crowd. But this was a different level. It began the trend of heavy crowd support for people featured on Being the Elite as Kazarian and Sky were very popular.

The crowd loved the Over Budget Battle Royal, which featured one Canadian, Hamilton, Ontario’s Ethan Page, prominently, along with Jordynne Grace, who was the only female competitor in the match. Ultimately, the crowd went bananas when the battle royal was won by Flip Gordon under a mask, allowing Gordon a shot at the Ring of Honor World Championship later in the evening.

Three matches followed, all decent, if not what the crowd was there for: Matt Cross defeated MJF; Christopher Daniels beat Stephen Amell of the TV show Arrow with Jerry Lynn as the referee, when the Fallen Angel hit the Best Moonsault Ever for the win; in a four-way dance, Tessa Blanchard beat Madison Rayne, Britt Baker and Chelsea Green, nailing Green with a Hammerlock DDT.

The show went to the next level when Nick Aldis defended the NWA World Heavyweight Championship against Cody. The match was presented as being a big deal from the start. Cody was brought to the ring not only by his wife Brandi, but also his very popular dog, and legends Diamond Dallas Page and Tommy Dreamer, two men who credit their careers to Dusty Rhodes.

Not to be outdone, Aldis was brought to the ring with former NWA champions Jeff Jarrett and Tim Storm. From the word go, the crowd was intense. From a pre-match standing ovation to tears being shed by many in the crowd as Cody captured the title his father once held.

Since we were in Chicago, and Road Warrior Animal was in the house, as were a lot of legends, there was a Chicago Street Fight, with Hangman Page taking down Joey Janela. Following that, ROH World Champion “The Black Machismo” Jay Lethal, accompanied by Lanny Poffo (!) kept his title when he defeated Flip Gordon, working his second bout of the night; the storyline for Gordon had been going on for some time — that he wanted to be booked on All In, but was not. 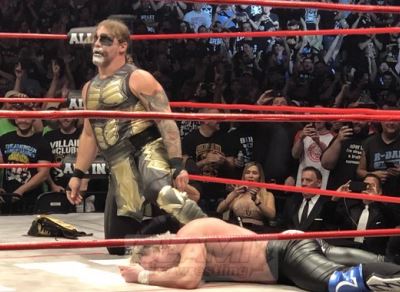 The bout between Kenny Omega and Penta El Zero tore the house down. The crowd was amped for this, with chants of “holy s—” before the two even touched. After Omega, the IWGP Heavyweight champion, picked up the win, the lights went off and when they came back, Penta suddenly sprang to life. However, the fans sensed it wasn’t actually Penta. Instead, many quickly caught on that it was none other than Chris Jericho. The building exploded when he removed the mask. 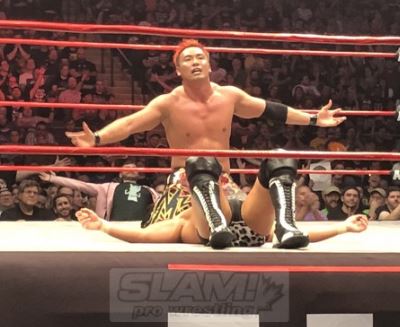 Kazuchika Okada has the better of Marty Scurll. Photo by Matt Bishop.

Marty Scurll upped his stock in a losing effort against Kazuchika Okada. Both men received thunderous ovations off the start before settling into a long, wonderful match that saw Okada use two Rainmakers to get the win. 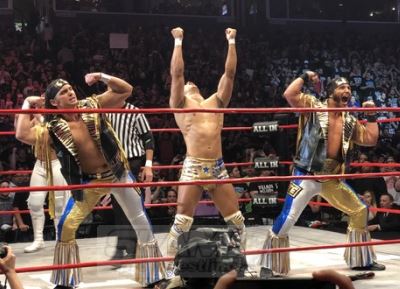 Kota Ibushi and the Young Bucks. Photo by Matt Bishop.

The main event saw Kota Ibushi and the Young Bucks defeat Rey Mysterio, Rey Fenix and Bandido. The match itself was a sprint from start to finish, as the show was running low on time. The capacity crowd roared for everything they expected here. Bandido in particular impressed in his biggest exposure to date.

After the show rushed off the air, the Bucks welcomed Cody and Brandi Rhodes, Hangman Page, Omega and their families into the ring for a post-match celebration.

They deeply and sincerely thanked the fans, and then they discussed All In 2. “Double or nothing,” Cody teased, as he discussed how the group will definitely be sticking together.

Cody handed the mic to Omega, who took the show home.

Whether All In changes the professional wrestling world completely remains to be seen. But for one night, pro wrestling seemed as big, if not bigger than it has at its various peaks.

Rhodes and the Bucks took a big risk. Ultimately, the crowd, 70 percent or more of which were clad in Bullet Club merchandise of some form, told them back that they too were All In.