Twenty years ago, Mick Foley stood atop a nearly 20-foot high steel cage, not knowing that the trajectory he would take would change the course of his career — and cement his legacy in the world of professional wrestling.

He used to look at his association with that Hell in a Cell match against the Undertaker in Pittsburgh with the same distance Adam West’s had for his role as Batman. But things have changed in the past two decades when he looks back on the 1998 King of the Ring pay-per-view.

“At a certain point, it stopped being a nuisance and started being a blessing,” Foley said.

And that blessing is now the focal point of the hardcore legend’s latest spoken-word tour, “20 Years of Hell.” 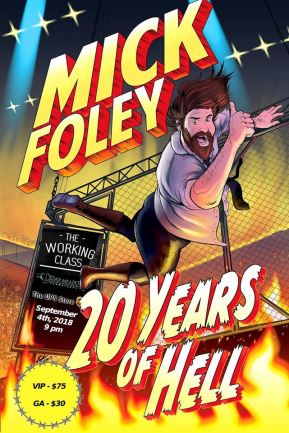 “I thought that was something worth celebrating,” Foley said from his hotel room, hours before his first show of the Canadian loop in Victoria, British Columbia. “And given the number of times I’ve been asked about that given match, I thought [this would] give me a unique opportunity.

Plus, he said the show is like a “concept album.”

“I thought of idea of an entire show around one night could be really compelling,” Foley said.

To Foley, it’s not the falls off of and through the top of the cage that have earned him his place in wrestling’s history, but what happened after that “makes it so compelling.”

“One [moment] that’s overlooked, I think, is when I get up from the second fall and my legs can’t support my weight,” Foley said. “I kind of crumble to the mat in a way that’s not very ‘pro-wrestling’ like. And that was where the Undertaker made the call to end the match. To this day, I do not know how I convinced him otherwise… By all indications, I was not okay to continue.”

As he discusses in the show, Foley said, a lot more is known about head injuries now than 20 years ago.

“If something similar were to happen today, the match would be stopped immediately… In a strange way, I’m fortunate that was not the move that was made that night,” he said.

Though the match earned its place in history for its brutality, it was a “game changer” in another way for Foley under the Mankind moniker.

“I think when I took the mask off after the first fall, it was kind of symbolic of becoming a person and not a character,” Foley said.

After Hell in a Cell, Foley began bringing levity to his in-ring persona, which included his run with The Rock as The Rock ‘n’ Sock Connection.

“That is largely what most people remember Mankind for,” Foley said.

And anyway, becoming a “light-hearted Mankind” was “a lot closer to [his] own heart.”

“I did it out of necessity, but I didn’t realize it until years later how important that light-hearted character was to people,” Foley said.

Those interested in hearing about the events leading up to Foley’s character change — and learning about what he calls the “hidden Mickeys” in the Hell in a Cell bout — can expect a “nice atmosphere.” He said he has intentionally avoided “late-night weekend shows, where fans tend to get a little rowdier.”

“It’s a storytelling show [and that] really requires some listening,” Foley said. “With a little too much drink, some of the subtleties get lost.”

And as many times as Foley has been through Canada, this tour is the “most thorough,” taking him to smaller Ontario towns like Cochrane, Fergus, and St. Catharines, for the first time. In some cases, tickets are not even available online.

“When I heard that, I thought it sounded crazy,” Foley said. “Yet these are some of the fastest selling shows.”

Foley also called upon the “solo guys out there,” who typically make up a portion of the audience.

“I’ve heard that anecdotally, [and I’ve] seen some of the ticket sales… I want those guys thinking about going to know that they won’t be alone. [You] feel like you’re part of something,” Foley said.

He also said he has noticed the average age of people asking him questions at the spoken-word shows is “getting younger and younger.”

“I’d say half of the people asking about the match were not born when it happened,” Foley said.

They are finding the match online, or families are “passing down this moment.”

“[Hell in a Cell has] become the go-to match for people who don’t like wrestling when that’s the match their shown,” Foley said. “It’s the answer to ‘wrestling’s fake.'”

But the bout itself, according to the former Cactus Jack, is “symbolic” of all those who have gone the extra mile to make their careers.

“I’ve come to accept that I’m being used as an ambassador for the wildest, but also the dedication that so many people have come to accept it and enjoy it,” Foley said. “For a guy who just wanted to make impressions when he started out 33 years ago to be able to make one of the biggest impressions of them all is really flattering.”

For details on the tour, including upcoming dates, see realmickfoley.com.