Five things I learned at Smackdown in Detroit

DETROIT – Smackdown Live returned to Detroit on Tuesday night. This episode showcased the heated Miz and Daniel Bryan feud throughout the night, building up to their mixed tag team match at Hell In A Cell. Although the size of Smackdown’s crowd in Detroit was underwhelming — the upper bowl of Little Caesars Arena was closed off — the fans in attendance made up for it with their constant energy. Here are five things I took away from the show in the “D.” 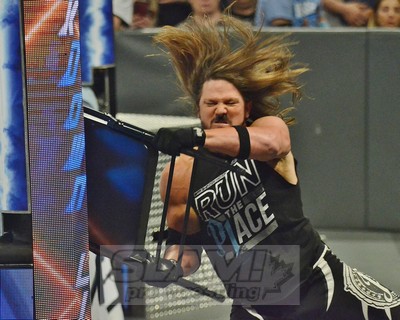 AJ Styles with a swing and a miss on Samoa Joe; guess the Detroit Tigers won’t be signing him. Photos by Brad McFarlin

Naomi pulled off the victory against one half of the IIconics, Peyton Royce, but was immediately attacked by Royce’s partner, Billie Kay. The IIconics continued the two on one attack on Naomi, until a familiar theme played. The “Empress of tomorrow,” Asuka ran down to the ring to save Naomi, and single handily took out the IIconics, ending her hiatus from WWE television — and speculation that she was leaving.

Smackdown Live’s Women’s champion, Charlotte Flair, and her bitter enemy Becky Lynch, shared a heated argument over video chat, which was displayed on the TitanTron in Little Caesars Arena. Charlotte continued to express her claim that she didn’t steal Becky’s spotlight at SummerSlam, but instead took an opportunity to win the Women’s Championship. Becky was against every word of Flair’s, and responded with distasteful words. The Detroit crowd, listening and watching on the tron, supported Becky’s unprofessional mannerisms, cheering loudly at all of Becky’s comebacks. In turn, the Women’s Champion, who you could argue is the victim, was booed.

Samoa Joe made his way to the ring, and once again taunted the Styles’ clan. Joe made his cryptic message to the wife of AJ Styles, Wendy,, and even took shots at the Styles’ youngest daughter. But finally, AJ heard enough. Coming out to the ring, charging at Joe, the two brawled, and brought the action to ringside. Styles attempted to hit Joe with a chair, and continued the assault until he was stopped by a group of referees. 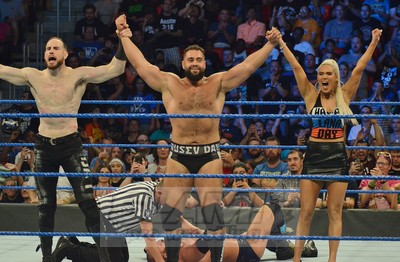 The Bar vs Rusev Day

A triple threat tag team match took place to determine who would face The Bar for the number one contendership rights. The Usos made their entrance first, followed by Sanity. Finally, Aiden English and Rusev appeared, claiming that everyday is Rusev Day, which received major applause. The three teams battled it out, with every team getting some offense. But the teamwork of Aiden English and Rusev made them the victors… 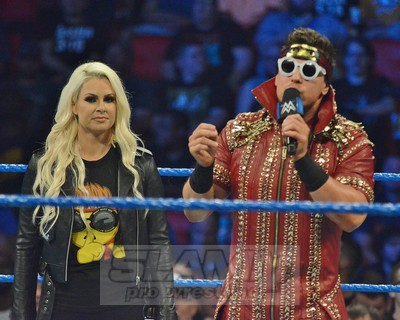 Maryse and The Miz.

The opening match of the show saw Daniel Bryan against Andrade Almas, with Brie Bella and Zelina Vega at their respective sides. Daniel Bryan managed to pick up the victory, and Brie Bella even gave a short attack on Vega. Up on the big screen though, The Miz and Maryse appeared, claiming that they weren’t at the arena, but were at the finest Italian diner in Detroit. Later that night we saw Bryan and Bella leaving the arena, and heading to the same restaurant, only to find out that the Mizanins had made their way back to the arena.

The main event of the show put The Miz up against former tag partner R-Truth, which was interrupted by the returning Daniel Bryan and Brie Bella. This gave R-Truth the opportunity to roll up Miz for the win. The Danielsons stormed to the ring and looked to attack Miz and Maryse, only to be stopped by Almas and Vega. The Mizanins managed to escape, but Almas and Vega were trapped by simultaneously YES Locks by Bryan and Bella to end the night.