TORONTO — Walk around Fan Expo Canada — Toronto’s annual comic, sci-fi, and pop culture convention — and you’re bound to see some spandex-clad heroes and villains. But on Thursday night, it wasn’t Superman and Wonder Woman who the crowds were flocking to see. But rather, a bunch of other “super friends” in the form of WWE Superstars AJ Styles, The Miz, Charlotte Flair, and Triple H.

The four of them main-evented the first night of the Expo, which takes place through Sunday at the Metro Toronto Convention Centre. Earlier in the day, hundreds of members of the WWE Universe lined up for photo ops and autographs from the stars. Later that evening, all four were on hand for a special Fan Q&A session. The session was available for free for all of the Expo attendees, though many of the attendees generously made donations to Connor’s Cure, the fund created by Triple H and wife Stephanie McMahon that is dedicated to researching and fighting pediatric cancer. 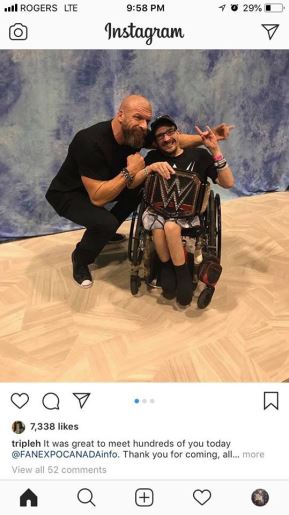 Triple H sent out this photo on Instagram of meeting Toronto-area fan Tor Hart at Fan Expo Canada on Thursday.

After a brief introduction by Caroline Szwed, one of the hosts of Aftermath, the WWE recap show that airs on SportsNet Canada, the superstars came out to great applause, with the crowd strongly favourable towards Miz and Triple H in particular.

Those two were also the ones of whom most fans asked questions. Including the first audience member, who asked them the difference between wrestling in Canada and in Japan — despite the fact that AJ Styles, who of the three of them was actually a regular in Japan, was sitting right there.

For the most part, the questions were friendly “softballs” and the superstars replied in kind. Though there were some friendly jabs taken at each other at times. For example, after answering a question about his newborn daughter, Miz’s soft side showed through as he gushed lovingly. “I used to be so cool,” he remarked afterwards. “No you didn’t,” quipped Triple H, eliciting laughs.

Later, the four shared their memories of their first or favourite match. This allowed for some Canadian content, as Charlotte noted that hers was the match she had against Natalya on NXT.

“I don’t think I’d be where I am today if it wasn’t for that match,” she said. “Going into it, I was worried. I knew I was athletic, but I didn’t know if I could do it. Nattie told me, ‘Relax. Listen to me out there. And we’re going to be fine.’ It may have not been my best match necessarily, but it was probably my most important.”

Styles, meanwhile, recalled his first match with the company — not the 2016 Royal Rumble match, but rather a dark match he competed in many years ago.

“After the match, this guy came up to me and told me, ‘You need to slow down.’ I kind of (dismissed him), like ‘Yeah, yeah, I know.’ Turns out that guy was Triple H. After years of waiting for a call from WWE, I was thinking, ‘I wish I hadn’t have said that.'”

“I think you eventually ended up doing okay,” cracked Triple H. He then went on to praise the abilities of Styles and other high-flying, fast-paced stars, naming specifically NXT star Ricochet as another. “What it so good about them isn’t what they can do. But, because it’s so easy for them, what’s good about them is that they make it look hard. That’s what is really impressive.”

And while he knows he’s not able to go at that pace himself, Triple H actually finds his backstage role to be enough of an adrenaline rush for him to a large degree.

“There is nothing like the experience of standing in the ring in front of WWE fans. But the rush for me now is standing backstage, and seeing people like Charlotte, like The Miz, and seeing (the evolution) from where they started to where they’ve ended up. That’s a really special feeling.”

Speaking of special, it’s safe to say that next year’s Summer Slam — which, as was announced earlier this week, will be held in Toronto — will fit that bill. Szwed ended the event with her sole question of the evening, asking the Superstars to comment on what the fans can expect.

“Canada has some of the greatest fans in the world,” said Styles, “so it’s going to be a Phenomenal event.”

“Actually, it’s going to be… AWESOME,” corrected Miz, as the fans joined him in delivering his catchphrase.

“It’s like a mini-WrestleMania week,” said Charlotte, about the days leading up to that event. “It’s exciting to bring everything we bring to a city. From the NXT show, to the charity events we do, the Make-A-Wish events, and then of course the event itself. It’s a really exciting time. Not just for the fans, but for us too.”

“Actually, the whole reason I’m here is to tell everyone it got cancelled,” Triple H teased. “You all kept saying that we need to come up here more, so we just said we were. We’ll actually be doing it in Buffalo, so hope to see you there,” he joked.

Fan Expo Canada runs through Sunday at the Metro Toronto Convention Centre. While the WWE superstars were only appearing on Thursday, there are a number of other celebrity guests on-hand with connections to wrestling, including: Cary Elwes, Wallace Shawn, and Chris Sarandon who all starred with the legendary Andre the Giant in The Princess Bride, Star Trek icon William Shatner, whose relationship with WWE goes back several years, iconic star Christopher Lloyd, who was Hulk Hogan’s co-star in Suburban Commando, alleged funny man Rob Schneider (who starred with Goldberg and The Great Khali in The Longest Yard). Other non-wrestling guests include Canada’s Michael J. Fox (who is teaming up with Lloyd for a Back to the Future reunion, the stars of Degrassi: Next Class, and the brothers from The Vampire Diaries.