With the advent of the first WrestleMania in 1985, wrestling fans bore witness to the slow demise of the wrestling territories. One by one they fell: the mighty AWA withered away on ESPN; Bill Watts’ UWF made a splash and was bought up by a competitor; other territories, like Toronto and Los Angeles, just switched to WWF. Are the territories being revived?

In a teleconference before NXT TakeOver: Brooklyn with WWE’s Executive Vice-president of Talent, Live Events and Creative, Paul Levesque (Triple H) told SLAM! Wrestling about the developments in the United Kingdom and played a little fantasy booking. Is Levesque a visionary, a throwback, a dreamer, a fan, or maybe a bit of each?

In early 2017 the WWE introduced the world to its first-ever United Kingdom champion Pete Dunne. This was a huge step in gaining a strong foothold in the robust and exciting British wrestling scene. At the time the UK championship and tournaments were seen by some as the WWE’s way of signing up the best UK talent and then not using them. Pundits proclaimed that the WWE was out to destroy British wrestling just as it was reborn and attracting large crowds. 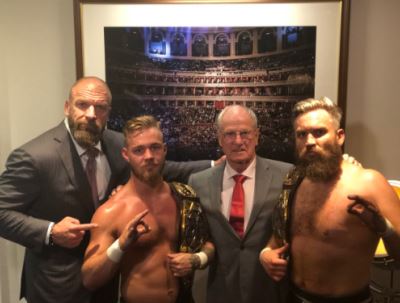 In mid-June the WWE announced that it would begin filming a new series called NXT UK. This announcement, made by British wrestling legend Johnny Saint and Levesque, sent shock waves throughout the wrestling world. It had been rumoured that the WWE was looking at making local WWE products in Asia, South America but nothing concrete had been established.

NXT UK confirms the WWE’s commitment to developing the company as a truly global wrestling brand and to build on regional wrestling traditions. Levesque was frank in stating that the first few NXT UK shows had been taped and more were to come but he did not have a firm date on when they would begin airing.

“We have started to shoot the first episodes because it was there and I didn’t want to wait,” said Levesque. “The fan base in the UK knew we were serious and we were coming in. I can tell you this that they are really good. The talent, the episodes that we have and the product that we have will be worth the wait. When you are a global brand like we are sometimes it takes a little longer then you anticipate.”

Levesque doesn’t see NXT UK as an off-shoot of the NXT based in Florida but he did say we could potentially see stars from both groups visit the other show. “There is a split but a little bit of a criss-cross,” said Levesque. “You could see talent stepping over to the UK and back and forth a bit as it gets more and more structured on its own. With the UK I would prefer it to stand on its own and do its own thing.”

With two different NXT brands old-school fans could start playing fantasy matchmaker in their heads. You could even wonder what it would look like if there was an NXT China, NXT Brazil, or even NXT Germany. An old-school fan himself, Levesque started to get excited as he hypothesized what could happen with talent and the brands.

“In my mind’s eye I envision the territory system of, look at the blend across our markets that we are able to make a sub brand or regional brand like the UK, if NXT is kind of like an oversight brand where the NXT champion is like your traveling world champion,” said Levesque.

With that one statement Levesque conjured up images of Harley Race or Ric Flair travelling around the globe defending the NWA World title against each region’s best. It is possible to envision NXT’s “ten pounds of gold” as a true world title for the first time in decades.

The expansion of NXT could also see the revival of territories (run by the WWE) and give performers more places to work.

“I do see the ability to be flexible and move to other places but it also gives us the ability to be flexible that talent can work in NXT or NXT UK for a period of time, run some great programs, get some great learning, get themselves up to a certain level and then move to a new place where they can take the things that they learned in that area where they were working and who were the people they were around and apply that in a different scenario,” said Levesque. “It is going back to the old days of getting yourself over in a different territory so to speak. Finding the things that worked for you and subtly changing them on the way to make yourself better. That to me is what will be great with having it in that manner, that territory system where people can move around.”

With the expansion of NXT UK, Levesque was questioned about the brand’s star power. One name that came up was former NXT champion Neville who has been estranged from the WWE since October of 2017. The UK star has had contract issues with the WWE for some time and Levesque was not sure about where they stood at the moment, but was full of praise for the grappler.

“To be honest, I am not positive and would have to look in to that,” said Levesque. “You are 100 per cent right, to me he is one of the most talented guys in the world. I loved the time he spent with us in NXT. I thought he did a wonderful job of building up the cruiserweight division on 205 Live. Time will see where that ends up.”

Paul Levesque is a man with a vision for professional wrestling. His NXT UK is in its infancy but its first steps have sent waves of excitement throughout sports entertainment. Is Levesque the man to restore the territories and the prestige of the world title? Only time will tell.