‘That Guy’ Danni Deeds running for mayor in Abbotsford

There are professional wrestlers who keep their in-ring personae solely for their matches. Trevor Eros, better known as “That Guy” Danni Deeds, is taking this character into his new and exciting venture — running for mayor in his hometown of Abbotsford, B.C.

Eros said he loves to help his community, but truly believes that there needs to be a voice for the people. “We have so many cultures and so many age groups. Everyone has their own ideas [on how to make things better] for the public, but a lot of those ideas aren’t representing a lot of the citizens that live in Abbotsford,” he told SLAM! Wrestling.

Although things need to change, the B.C. wrestler admitted that the city needs a frontrunner, someone to be ‘That Guy.’ “I think that in conjunction with the character that I play [in the ring] I can be an active voice in the city and for people around me,” said Eros. 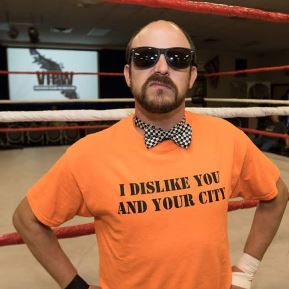 “That Guy” Danni Deeds is running for mayor Abbotsford, B.C., of under his real name of Trevor Eros.

Those who truly know him could not agree more.

“He listens to everyone’s opinion and doesn’t shoot anyone down, he doesn’t discriminate against anyone,” said Kevin Jefferies, former WWF/WWE referee with over 30 years in the wrestling business. He met Eros several years ago and instantly liked his lively personality. “He will listen and he will never shut the door down on anyone.”

Jefferies articulated that Eros’ youth — he is 36 — will be his advantage to win over the citizens of Abbotsford. He admitted that the young people are the future of politics, and they need to be heard. “We have to have a new fire in politics. I learn so much from the young people today and I enjoy learning from them. The younger generation is a lot more knowledgeable with what’s going on in the world today. And we need that input,” said Jefferies.

Eros has a background in leadership and management, specifically in hospitality and tourism. He believes that his vastly different background makes him more than your average mayoral candidate. “Having a voice that’s not as usual [in politics], being a wrestler… having a different personality, and an aggressive and loud approach to things might really stir the pot for politics out here.”

Before becoming a professional wrestler, Eros was a long-time fan, starting at age seven. Even in high school, his friends and classmates knew that he would eventually find his way to the squared circle. “Myself and my friends were voted in the top three ‘likely to end up in the WWE in our graduating year’ just based on our behavior and our interests,” Eros revealed.

Since his debut in December 2007, he has wrestled with Elite Canadian Championship Wrestling. Billed at 5-foot-11 and 151 pounds, Eros went on to win the Jobber Championship as well as the Tag Team Championship with Cremator Von Slasher, from Port Alberni, BC. Although he has many fond in-ring memories, Eros recalled a time when he met one of his favourite wrestlers and got to do something he never imagined would be possible.

“In Grade 10, I had gone to Vancouver — unsuccessfully — to get Mick Foley’s autograph. Last year he came down to Kelowna for Invasion Championship Wrestling and I had the opportunity to go out, as a worker this time, and tell him this story [of trying to meet him]. I not only did I get his autograph, but I got to perform in front of him,” continued Eros, “that was such an honour for me.”

Eros hopes to one day run his own foundation, pending other factors. “I want to start running my own charitable wrestling shows myself starting next year. However, that will depend on whether my mayoral campaign is a green light or not,” said Eros.

You won’t be seeing much of Danni Deeds in the ring the next few months, as it all depends on what happens with the upcoming elections. “I will be attending some matches this year but I haven’t confirmed anything yet. They are kind of overlapping when the mayoral elections going to be happening. But I’ll definitely be back in the near future.”

However, Eros admitted that he became content working in the independent circuit because he also had another dream he wanted to pursue; having a family. He has two daughters, aged five and seven respectively. “I bring them to the wrestling shows and I actively include them in the process and that way they know there’s not limit that they can’t do. Ultimately, they can live their dreams and use [me] as an example,” Eros concluded.

His campaign begins in earnest in September and the general election will take place on October 20th. Eros wants the voters to know that he’s ready to be their guy. “I want to be the mayor that’s going to constantly roll up his sleeves and do right by as many people as possible and really direct change in this community for everyone who wants to direct change [with me] as well.”