A wrestling fan all his life, Scott Carnegie recently filmed Canadian Wrestling’s Elite’s three-week tour through western Canada. But the final product — a documentary released Aug. 25 on CBC — is not about wrestling.

Rather, it “shows the realness behind the act.”

“My fiance does not like wrestling at all. She’s not interested,” said Carnegie, producer and director of Ring Warriors. “[But] she came to the documentary [viewing last week] and she loved the documentary because it’s not about wrestling. It’s about everything — the story behind the show. And in a way, I think it makes it more appealing.” 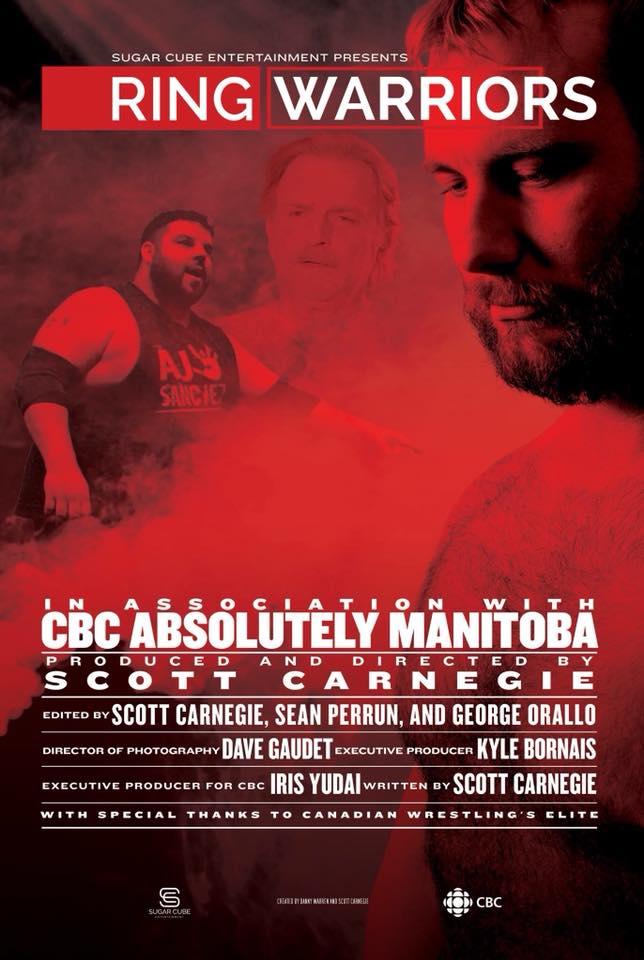 The 48-minute flick takes viewers on a 21-day journey through British Columbia, Alberta, Saskatchewan, Manitoba, and Ontario, in the winter, with CWE staples such as “Hotshot” Danny Duggan, AJ Sanchez, Chase Owens and Travis Cole. Also along for the tour was WWE legend and hall of famer Jake “The Snake” Roberts.

Carnegie and Duggan met in 2005, when the now-owner/promoter of CWE was just 17 years old. Duggan said the idea for the documentary came up around 2014, but it had been “put on the shelf” until last year. The two went back and forth over the years, and “when the timing was right,” Carnegie joined CWE for the winter 2017-18 tour.

There are a lot of “shysters” in wrestling, according to Carnegie, but Duggan (Danny Warren) has proven himself over the years.

“I watched and I made sure this was someone who was legit,” Carnegie said of choosing to highlight CWE in the documentary. “That’s important to me.”

Also important to Carnegie was the fact that CWE tours the Canadian provinces, which “makes some interesting stories.”

It took about one year to develop the film, from pitching it to CBC last August to now, Carnegie said. The idea of showing independent wrestlers on the road always was a “compelling” idea to Duggan.

“The next thing I know, we’ve got ourselves a deal… The last year, year and half has been pretty wild,” Duggan said.

Carnegie and his film crew met the wrestlers about one-third of the way through the tour, and for the producer/director — who also has spent some time in the ring as a referee — “the full cooperation of CWE made the whole difference.”

When Duggan told the locker room that a film crew would be joining them on tour, he said there was a “mixed reaction.” It was a “good opportunity” for CWE to get more exposure, but Duggan said some wrestlers who have been in the business for a while didn’t like the idea.

However, AJ Sanchez, a CWE mainstay who was featured prominently throughout the nearly hour-long film, was not one of those individuals. He started wrestling in May 2002, and was with CWE when the company first began touring in 2010.

“My reaction to [learning about the documentary] was that it was excitement,” Sanchez said. “The idea that somebody, or the possibility that somebody, was willing to take a chance on wrestling and show what we do up here… [I thought was a] fantastic idea.”

Sanchez said, as some who loves being in front of a camera to begin with, his experience on the documentary was “fantastic.”

“The opportunity to get more eyes on any wrestling products is a positive… [and] that goes for any form of entertaining or any form of work,” Sanchez said.

The most difficult part of filming for Carnegie was just keeping up with the crew. Conversely, the most rewarding part was that Carnegie said he felt like he had “the respect of the guys on the tour,” which ultimately allowed them to have as much access as they did.

In addition to showing behind the scenes on the road — the travel, the construction and tear-down of the ring, setting up the merch area and a pre-show pep talk from Duggan — the film also highlights an anti-bullying event at an elementary school.

Duggan said documentaries on independent wrestling are “very important” for the industry.

“The screening [last week] was the first time I saw it myself,” Duggan said, “and I thought Scott did an incredibly good job of capturing the industry in positive light… He did a very good job of displaying the struggle of being part of an independent wrestling organization that’s trying to get to the next level.”

Carnegie said — somewhat jokingly — that the documentary might have “ruined the careers of the heels.”

“They’re so likeable,” Carnegie said. “I think the takeaway is that any behind the scenes of this type of venture really makes you see them more as people than as characters. And it humanizes them too. I think it makes you feel more connected to them because of that. And it’s not all rainbows and butterflies, either. There’s some stuff that happens on tour that’s hard that they have to work through.”

From Carnegie’s perspective behind the camera, he said he was able to see the “grind of the day-to-day” and simply keeping up with the wrestlers was “exhausting.”

“The grind and the mental toughness it takes to keep up that kind of schedule — that’s really what impressed me with the wrestlers,” Carnegie said.

Having seen the final product at a special viewing last week, Duggan said he “really enjoyed” how it turned out.

“I thought Scott did an incredible job capturing the personalities [of everyone on tour]… At the same time, [the documentary] leaves open ended possibilities because [he] only has 48 minutes for an hour time slot to tell the story.”

The hope, for Duggan, is that having the product seen on a more mainstream level will put “more eyes on the product.”

“I think having a positive piece on the business like this that shows the good people that are involved with what we’re doing and spreading a positive message,” Duggan said.

Ring Warriors will be broadcast Aug. 25 at 7 p.m. on CBC Manitoba; it is expected to be available online shortly thereafter for viewing outside of Manitoba.

UPDATE: The film can now be watched online: click here.