‘Horror King’ Marseglia scary in ring and, soon, on screen

If you’re a horror film buff, it would be a dream to play the horrifying role in real life. That’s exactly how Vinny Marseglia — better known as The Horror King between the ropes — felt when he started his pro wrestling career back in 2006.

The persona he now plays in Ring of Honor didn’t come out right away. “Some people find themselves in professional wrestling a lot quicker than others,” Marseglia admitted, “for me, I had to figure out how to present [my character] in wrestling I guess you could say.”

It all started for the Rhode Island native when he decided to add a scary movie must-have. “I remember getting a really good replica mask of [Friday the 13th villian] Jason Voorhees’ and put my own logo on it for an indie show. [When I came out] the crowd loved it and The Horror King kind of evolved after that,” Marseglia told SLAM! Wrestling. 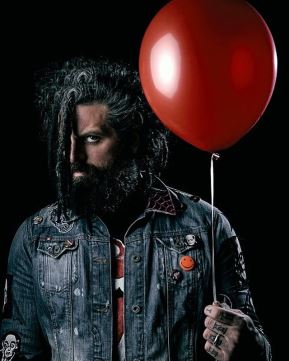 His love for these bone-chilling movies started at a young age, when his group of friends ran around their neighborhood, recreating their own storylines. “Everyone would hide and I would dress up as Jason or any serial killer from a horror film and I would have to find them. That was our version of manhunt,” he explained.

With years and years of appreciation for this type of flick, Marseglia is thankful for the career he has because not everyone gets their dream gig. “To be The Horror King on a stage like Ring of Honor is just really cool to me and I am so grateful to be able to do this.”

Marseglia’s signature touch to complete his persona is seen in the classic nightmare worthy film, It. “There’s something about these red balloons that’s just creepy,” he said.

Although this ’80s-classic made the balloons popular, for him it’s more the idea of that they represent. “It’s a symbolism, especially in Ring of Honor, you see the red balloons and, ‘Oh, The Horror King is coming!'”

Currently, they serve a dual purpose. “Now, I’m popping them in guy’s ears to make them go deaf before I beat them up, which you know, is kind of cool,” said Marseglia.

Growing up a wrestling fan, The Horror King was fascinated by the costumes and the face paint that some of the heels and babyfaces wore when he watched them on television. “When I was a very young kid, my favorite wrestler to watch was the Ultimate Warrior. In my teenage years, I loved to watch The Hardy Boys, especially in the ladder matches.” From then, he knew he wanted to pursue a career as a professional wrestler.

When Marseglia started performing at Northeast Wrestling, he got the opportunity of a lifetime. “I was able to wrestle both [Matt and Jeff Hardy] several times, especially Jeff. That was a really cool experience for me because those were the guys who made me want to wrestle.”

Marseglia has also gotten the opportunity to expose his terror side on the big screen. He will be featured in the film The Find, which comes out on Netflix this Halloween night. The director, David Gere, hand-picked Marseglia for the lead role. “He said, ‘I’ll send you the script and you can have a look at it before you say yes,’ but, who doesn’t say yes right away to that?” 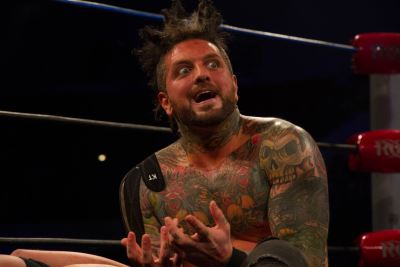 Scary enough for you? RING OF HONOR/Steven Wright

The Horror King plays Damon, a terrifying stalker, which came naturally to him. Although he enjoyed having an on-screen role, he absorbed lessons from those who worked behind the scenes as well. “Just learning from the camera men, how things are filmed and all the effect of filming was pretty cool,” Marseglia explained. Playing a part like this was always something he wanted to do, ever since he was a small child.

Marseglia said his wrestling persona definitely made an appearance in this film, which allowed him to be himself. “[Damon] was very much The Horror King, just with a different name and with a different set of rules.”

As for his upcoming matches, Marseglia will be on the card for Ring of Honor on August 25th in Philadelphia, along with the two other members of the Kingdom, Matt Taven and TK O’Ryan. He said he enjoys getting some down time before it’s time to raise havoc and unleash The Horror King on his opponents. “I get a little vacation before I throw myself around and get beat up.”