Like a good friend does, Joyce Grable called Paulla Kaye on her birthday in January. They talked and considered going to the Gulf Coast Wrestlers Reunion together. However, when Grable called her back a month later, the number had been disconnected. The veteran wrestler figured her friend would get back to her eventually. However, a couple of days ago, Grable googled her friend. Paulla Kaye had died on February 6th. 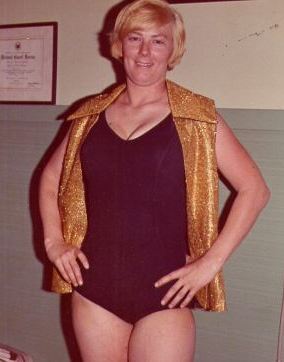 The ties that Grable and Kaye share go deeper than living close to each other in Georgia, visiting when they could. Kaye got into professional wrestling at the end of the 1960s, through Lillian Ellison’s school in Columbia, South Carolina. When Grable followed her dream to become a pro wrestler, her first bout was teaming with Tonya West against Paula Kaye and Dottie Downs, on August 12, 1972, during NWF’s Super Bowl of Wrestling at Cleveland, Ohio’s Municipal Stadium

“I wasn’t even supposed to wrestle that night,” recalled Grable of the three-ring extravaganza that featured a women’s tag team tournament won by Susan Green and Lilly Thomas in a final over Grable and West. “I was comfortable working with Paula. We remained friends the whole time. After she stopped working, wrestling, and went to work for the federal government.”

However, one wouldn’t know about Kaye’s wrestling days from her obituary. Instead, it just mentions her love of sports: “She was an avid sports fan, enjoying NASCAR; Oklahoma Sooner Football; South Carolina Gamecock football; and the Dallas Cowboys.” She quit wrestling for a steady job, said Grable; Kaye retired after 28 years working for the State of South Carolina Department of Transportation. 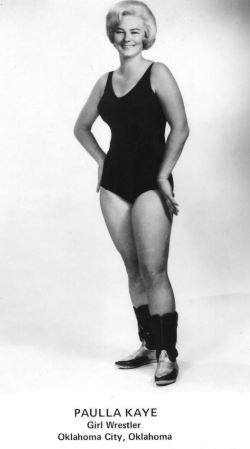 Paulla Kaye Collier was born January 4, 1948 in Duncan, Oklahoma (yes, two l’s in her name, though that was rarely used by promoters), to Clarence Paul Collier and Comilla Virginia Welch Collier. She served in the U.S. Air Force before becoming a pro wrestler. At 5-foot-7, 140 pounds, she was pretty typical of the women wrestlers in the Fabulous Moolah’s stable. Given her background, her nickname “The Oklahoma Cowgirl” fit just fine for the villainous wrestler.

“Paula was always a heel. She just didn’t get the recognition that she should have,” said Grable.

In the ring, Kaye was physical. “Her kicks were really good, her stomps and her punches were good. She was just overall a great wrestler that just never got the push,” said Grable.

Susan “Tex” Green knew to watch out for Kaye’s fists. “Strong person in the ring and knew how to use her fist. She knocked me out a time or two. She would stun me bad enough to get the three count,” Green told SLAM! Wrestling years ago.

Upon learning of Kaye’s death today, Green posted a heartfelt note to her Facebook account: “At 4:15 today I was hit with the news of one of the top female wrestlers of early 70’s passed away. Paulla Kaye you were my friend/sister of wrestling. We traveled from east to west the up to Canada and west to east then North to South. We drove them miles and enjoyed the back roads because there was no interstates. I have a smile remembering the times we were on the road. Have to say some of our road trips will forever be in my mind. Rest in Peace Paulla Kaye and I will see you again when my number is called. Love you girl”

In a 2007 interview with Jamie Melissa Hemmings, African-Canadian wrestler Sandy Parker said that her and Kaye got off to a rough start. “Paula was very standoffish. So we ended up having a little chat,” recalled Parker. Kaye said that she didn’t like blacks, and Parker told Kaye to give her a chance. “We ended up being friends. She told me one time, ‘You know, you’re right, Sandy, you have to talk to the person. You have to hate or like the person, not the colour.”

A more recent photo of Kaye.

Parker shared a road story proving that Kaye had changed. “We were down in Alabama one day and we were all sitting in this restaurant and we all ordered food at the same time and I was the only one who didn’t get my food. Paula went over and grabbed a guy from behind the counter and said if I didn’t have my food in two minutes that his ass was going to be dead. My food came.”

Grable, who has had her own medical issues, but has been declared leukemia-free after a five-year battle, said that Kaye “had heart problems; she wouldn’t stop smoking” but that “she wasn’t sick sick.” No cause of death is listed in the obituary. Kaye was 70 years old.

Kaye never married. According to the obit, she is survived by her brother, Ron Thomas, Sr., nieces, nephews and great-nieces and great-nephews.