Although she’s only been wrestling for two short years, do not be fooled. “Calamity” Kate Kroll has returned from Monterrey, Mexico where she had two bouts, one of which was a title match against the seasoned Lady Flammer Luchadora in July. Although she did not win the title, the Vancouver native admitted that she was pushed to her limits, which she not only anticipated but in turn, motivated her.

“It was definitely a shock to my system, but I enjoyed it. It forced me to fight back even harder, which probably made for a good match to watch,” Kroll told SLAM! Wrestling.

This wasn’t Kroll’s first time in Monterrey. She wrestled in Mexico about two years ago with her tag team partner Melody Mangler, where she learned all about this aggressive approach. Kroll said that she prepped for this solo match by watching a handful of Lucha Libre. “The girls down there learn techniques seen in North American and in Lucha, like locking up for example.” 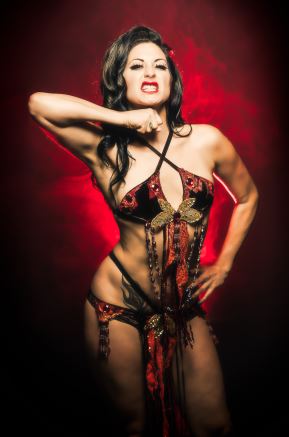 Watching this helped her while training, as she focused on specific elements. “Doing things on my right side like arm drags is what I did to prepare for this match, and just really studying [this style of wrestling].”

As she is a bit of a newbie in the squared circle, Kroll said she learned a lot from Lady Flammer.

“[Lady Flammer] has been training to become a wrestler since she was 12 and she comes from a wrestling family,” Kroll continued, “It was cool to work someone with that type of background and experience.” That being said, Kroll’s performing history is very different from her opponents’ — less hard-hitting and more graceful, you could say.

Calamity Kate was a burlesque dancer for a decade before she made the switch to wrestling. Although she does embrace her femininity, Kroll confessed that even from a young age she was less interested in Barbies and more into games of cops and robbers. “I wanted to climb trees and build forts but my three male cousins always had the mentality of ‘boys do this and girls do that.'”

When asked what she finds most interesting about wrestling, Kroll said it allowed her to express the masculine side that she never knew she could tap into. “It was kind of like a new version of myself I got to finally unleash.”

Kroll said that she learned a lot about herself when she started to train as a wrestler. “It was also a way to feel powerful and release some aggression and push my body to do things that I never thought I could do.”

She finds that wrestling is similar to burlesque, in the sense that you have to play a character, which comes naturally to her. While she’s experienced with playing a persona, Kroll would like to focus on improving her in-ring abilities.

“I’m trying to get stronger, build more muscle, work on my endurance in the ring and just become a better wrestler overall. I feel like I have so much to learn,” she said.

The young wrestler revealed that she will be attending the New Japan Pro Wrestling DOJO camp in California in December. Calamity Kate said that she is always setting goals for herself in wrestling and has been accomplishing them so far in her career. One of her obvious goals would be to wrestle in the WWE. “That would be a dream come true, but I really want to be able to travel the world first.”

She also expressed interests in going to East Asia, which is at the top of her list. “I really want to go to Japan and wrestle. I figure I would set a goal of being there a year from now.”

If you are in the Vancouver area, Kroll and her boyfriend Cobra Kai are planning their own event called Lucha Libre Spectacular on August 11. Both Luchadoras and North American wrestlers will be featured in all matches, including Calamity Kate herself. It’s one more opportunity for the rising star to learn from the best of two worlds.