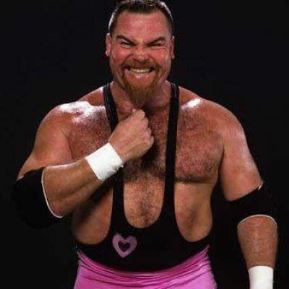 “It is with a sad heart, that I share with you the passing of a long time friend and colleague, Jim “The Anvil” Neidhart. Your thoughts and prayers for the family are appreciated!” posted Cauliflower Alley Club president Brian Blair — who often competed in the Killer Bees tag team against Neidhart and Bret “Hitman” Hart as the Hart Foundation.

Dave Meltzer reported at the Wrestling Observer website that Neidhart’s death Monday morning “was due to a grand mal seizure related to the Alzheimer’s Disease that Neidhart had been suffering from for some time.” TMZ.com reported that the death was the result of a fall.

Neidhart was the father of WWE star Natalya, and father-in-law to retired WWE star Tyson Kidd (TJ Wilson), who is now a WWE producer. In recent years, he was often seen on the E! reality show Total Divas alongside his one daughter. He has two other daughters, Jennifer, and Kristen who is known as “Muffy.”

He was married to Ellie Hart, one of the 12 children of Stu and Helen Hart, making the extended Hart family related to him through marriage, including brother-in-law Bret Hart, and active wrestling stars nephews Harry “British Bulldog Jr.” Smith and Teddy Hart.

WWE announcer Mauro Ranallo, who worked with the Stampede Wrestling reboot, and dated Jennifer Niedhart for a time, shared his condolences with Neidhart’s family on Twitter: “I’m not in the mood to write much. I just wanted to publicly show my support for Ellie, Jenni, Muffy, @NatbyNature & @TJWilson I was honored to be allowed into the inner sanctum of the Hart family. Jim Neidhart always showed me love.”

James Henry Neidhart was born February 8, 1955 in Tampa, Florida, and later attended Newport Harbor High School, cross country in Orange County, California. It was there that he excelled in athletics, especially track and field, setting the California high school record in shot put in 1973.

After high school, he pursued a football career, with tryouts and preseason games with the NFL’s Oakland Raiders and Dallas Cowboys, but he was never a main roster player.

Turning his attention to becoming a professional wrestler, at the suggestion of Los Angeles promoter Mike LeBell, the 6-foot-1 Neidhart went north to Calgary, and was one of the last to be primarily trained by the legendary Stu Hart. 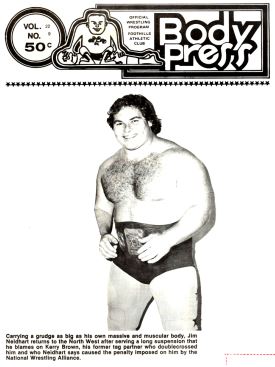 Neidhart on a 1981 Stampede program.

“My dad was no spring chicken anymore, and I didn’t see anyone past Neidhart that he put the time into. He completely trained Jim on his own. Jim was my dad’s product. Jim was third in the world at shot put. He was training to get signed by the [Oakland] Raiders and was referred to my dad from somebody at the gym. He called directory assistance, found my dad and asked him to teach him to wrestle. He listed all of his accomplishments and my dad asked him to come up to Calgary.

“He was a big, strong kid. He had a bench press close to 600 pounds. He was super-strong and really quick. He left Calgary after my dad taught him and got signed by the Raiders. He came back to train with my dad [after] he was injured. Then he was with the Cowboys and got cut. He was the last cut the year the Cowboys won the Super Bowl in ’78.”

After starting out in Calgary’s Stampede Wrestling, Neidhart, who weighed anywhere from 250 to a little over 300 pounds, took to the territories, wrestling in many places, including Mid-South, where promoter Bill Watts liked his football background (and Neidhart shared shot put secrets with Watts’ son, Micah). He also was a champion in Florida and Memphis.

However, it was in the expanding WWF of 1985 that Neidhart gained great fame, creating one of the best tag teams of the decade alongside Bret Hart, managed by Jimmy “Mouth of the South” Hart (who was no relation to the extended Hart clan). The Hart Foundation were WWF tag team champions on two occasions. 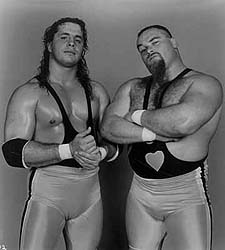 Initially, the new team was decked out in black outfits with blue trim. But in November 1986, a WWF seamstress convinced them to try out hot pink. In a Calgary Sun column, the Hitman recalled Vince McMahon’s reaction. “Vince stared, mouth agape and circled us yet again. Oh-oh, we thought, looks like Vince doesn’t like our new gear … Fearing the worst, we were shocked when he enthusiastically said, ‘That is what you guys have been missing all along. You had no colour! That is your colour. From now on, don’t wear anything else!'” “The Pink and Black Attack” was born.

In The Pro Wrestling Hall of Fame: The Tag Teams, Jimmy Hart explained where the team’s name came from. “We were in Miami Beach going to the ring. I looked behind me and this kid had ‘Jimmy Hart’s Hart Foundation.’ And he spelled it H-A-R-T Foundation. So I saw it and went ‘Oh my God.'” He went to the merchandising department at the WWF, and they loved it. “He called a week later and said, ‘We can’t use it.’ ‘Why?’ ‘It’s copyrighted by the Heart Foundation.’ ‘No, not H-E-A-R-T, spell it like our names, H-A-R-T.’ So we did it. That’s how we really got our name.”

The Hart Foundation would stay near the top of the WWF tag team heap until mid-1991, when the Anvil was ousted and the Hitman pushed as a singles star. “Well, you know, a tag team can’t last forever,” Neidhart told SLAM! Wrestling. “There were different situations being offered and that’s the way it went.”

Neidhart was released by WWE in the early 1990s, but was back for a brief time, teaming with another brother-in-law, Owen Hart, as The New Hart Foundation. Later, in 1997, a new Hart Foundation came on the scene. This time, it was Bret who was the focus of the heel group, consisting of Neidhart, Brian Pillman, Davey Boy Smith and Owen Hart. They spat out anti-American/pro-Canadian rhetoric, making them villains on one side of the border, and heroes on the other.

When Hitman Hart left WWF for WCW, Neidhart did soon thereafter, though never received a major push in WCW, not even under a mask as “Who.” He was a frequent, entertaining — and somewhat unpredictable — presence on indy shows until recent years when substance abuse issues slowed him down; he did at least two stints in a rehabilitation facility, believe to have been paid for by WWE. 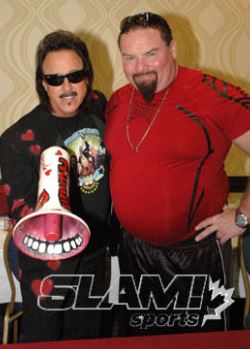 Jimmy Hart and Jim Neidhart at a fan fest in 2011. Photo by Ashley Forrester

Recently, it was revealed that Neidhart had been diagnosed with Alzheimer’s-like symptoms. It was former WWE superstar Christopher Nowinski, co-founder and executive director of the Concussion Legacy Foundation, that revealed the news in an Instagram post that was later removed: “Always great to catch up with the living legend @natbynature when she is in Boston for RAW. Heck of a match, heck of a show. She is so courageous to share her family’s life with her father’s Alzheimer’s disease.”

Details are still forthcoming on what happened, but some outlets are reporting that Neidhart died following a medical emergency.

Through the years, Neidhart also had a few brushes with the law. He was charged with assaulting and interfering with a flight attendant in January 1987. In 2005, he was accused of pilfering jewelry from a Calgary businessman’s home, though changes went nowhere. In September 2010, he was arrested on at a gas station near Tampa; he had been attempting to pump gas and take pills when police were called. Searching his car, police found 95 Oxycontin pills and 28 Methadone tablets, which were in a bottle with a prescription listed to Mary Cutillo, who had recently been burglarized. As the Wrestling Observer reported at the time, Neidhart “was charged with two counts of possession of controlled substances with intent to distribute, two counts of trafficking in illegal drugs, one count of burglary of an unoccupied dwelling and one count of grand theft third degree.”