On Sunday’s Slammiversary pay-per-view, Johnny Impact made his return to Impact Wrestling. He can’t really reveal much about what he was doing while off shooting the CBS series Survivor, but he can talk about being back in the ring.

“It felt awesome to be back. It was really cool here, how the fans, the Impact fans, responded to me coming back,” said Impact, referring to the REBEL Entertainment Complex in Toronto. “First match at Slammiversary, this is probably the hottest crowd I’ve wrestled in front of as Johnny Impact. There’s a lot of reasons people do wrestling, but the number one reason is to do what we just did out there in that match. To be in front of a hot crowd, to have an awesome match.”

Moving the TV tapings around is a plus in his mind. “To me, the main thing as a performer, a pro wrestler, is that it was fun taping in Orlando, because there’s a lot of nostalgia there, based around Impact, they’ve been there for so long. But to me, it feels really cool to move the show from city to city, because that’s when you get a big crowd like we had at the REBEL Complex tonight. People, fresh fans, fans of Impact, might not have been to our show ever, or in a long time, that are excited about wrestling.” 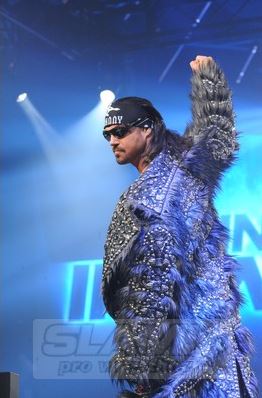 Impact’s time in the promotion dates to August 2017, when he became Johnny Impact, after being known under other names — John Morrison, Johnny Nitro, Johnny Mundo — through the years. There’s not really much to be said about his time there, other than he’s had a few World title shots here and there, but mostly he’s been spinning his wheels.

He thinks the promotion is beginning to really roll.

“I feel like there’s this, I don’t know, a swelling of interest and pride among the guys on the roster for the products, but also interest from the fans. Out there tonight, all those people were chanting, ‘Impact Wrestling, Impact Wrestling,’ ‘This is Impact.’ Over the last year or two, when I first signed with Impact, there’d be times when I would go out and wrestler at an independent show, and, ‘My name’s John Morrison,’ ‘Yea!’ ‘Johnny Impact.’ ‘Boo.’ ‘Boone.’ ‘Yea!’ I feel like those notions, those ideas of what Impact was has been changing, and the evidence was tonight.”

Boone: The Bounty Hunter was a film that Hennigan created, co-wrote and executive produced. [See boonethebountyhunter.com for more.] It’s pretty close to his heart. Aside from distribution deals in places like Dollar General and WalMart, the movie was added to Netflix, which has resulted in added eyeballs.

“I’ve been hearing from more people that they’ve seen it on Netflix, but Netflix is very secretive about their numbers; they don’t share their numbers with anybody,” said Hennigan, ruing Netflix’s policy. “It would be super helpful for me to know, but I feel like there’s a strategic advantage for them to have the numbers and not let people know, because then if you can’t point to your Netflix numbers when you’re negotiating, you’ve literally have nothing.”

A sequel to Boone: The Bounty Hunter is on his plate.

“I’ve got a couple of ideas for a sequel to Boone. A budget is going to determine which of those ideas is the one we go with,” he said. “I’m going to push for it to happen, because I feel like, outside of wrestling, Boone: The Bounty Hunter is the project that I’ve done, that I’m the most proud of, that I love sharing with people. Making a Boone 2: Back to Boone, or whatever, is something that I’m stoked about.”

Also close to his heart is his new bride, Kira Renee Forster, known to wrestling fans as Taya Valkyrie. They were married on June 1, 2018. Of course, there were plenty of work colleagues at the ceremony, including Dolph Ziggler, Zack Ryder, The Miz, Chelsea Green, and Diamond Dallas Page.

Imagine the troubles trying to get everyone there. “Wrestlers are hard to book. Especially on weekends,” he said, drifting off. “The wedding, man. So much stuff’s happened. Probably the best day of my life.”

He and Kira were a tag team on it, with one doing the heavy lifting. “I’ve got to say Kira did most of the booking. We talked about it and made some plans before I left for Survivor. But whilst I was away, she finished off a lot of the stuff.”

Being in Toronto, Hennigan was asked whether he feels more Canadian, since he married a girl from British Columbia.

“I would love to get a second citizenship up here. The health care you guys have got, Tim Horton’s, Molson’s, friendly people. Actually, not kidding,” he said. “I feel more Canadian than I ever have.”

He is struggling with the lingo, though. “Eh, hoser. Even though Kira always gets pissed when I say, ‘Hoser.’ She’s like, ‘We don’t talk like that. No one says hoser. Maybe in the Maritimes.'”

Greg Oliver is more beer hunter than bounty hunter, but he is also the Producer of SLAM! Wrestling. He can be emailed at [email protected], and you can follow him on Twitter @gregmep.