Mat Matters: Bill Cardille was the voice of my childhood

For me, Bill Cardille, the host of Studio Wrestling in Pittsburgh, was the voice of my childhood. Could he describe the moves the way Gordon Solie did? The answer is probably not. But what Cardille did was make the show entertaining.

His death on Thursday, July 21, at the age of 87, has me reflecting back on those days. 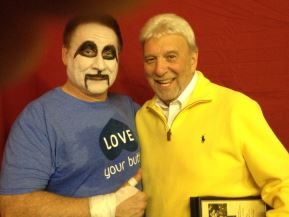 Lord Zoltan and Bill Cardille a few years back.

In 1961, Cardille, who was born in Sharon, Penn., and had begun his career at WICU in Erie, PA in 1957 before moving to Pittsburgh’s WIIC Channel 11 (where he was actually the first voice heard when it went on the air), took over as host announcer on Studio Wrestling and made it one of the most popular wrestling TV shows in the country. He would introduce each week’s show with his tag line: “Welcome to 90 minutes of unorganized mayhem where anything is liable to happen, probably and usually does!”

The format was a 90-minute show consisting of two-out-three fall squash matches. Even as a nine-year-old I knew Jerry Dorsey wasn’t going to beat Waldo von Erich, but Bill Cardille, with his colorful delivery, could make this match fun and interesting.

When he was interviewing Bruno Sammartino, and George Steele came out, you knew that Bill’s solid-oak name placard was about to get broken over Bruno’s head and Cardille would do as good of job selling the mayhem as the wrestlers did.

It seemed that Bill was always in a good mood on the show, whether it was calling a match with Dominic DeNucci manhandling Frank Durso, or George Steele scaring the life out of Pittsburgh Pirates Hall of Famer Pie Traynor, who was there to do the live American Heating commercials. Cardille even made a star of a fan, Ann Buckalew, who he named Ringside Rosie; she was a staple at all the WIIC TV shows as well as the Civic Arena events.

Another popular thing Cardille did on Studio Wrestling was the Pedestrian Parade. If the matches ended early and there was still TV time left, he would interview fans as the lined up to leave the TV studio. This was the only wrestling TV show I ever saw that happen on.

But Studio Wrestling was not the only show Bill Cardille was famous for in Pittsburgh.

He is best known for hosting Chiller Theatre on Saturday nights on Channel 11. Here is where he earned the nickname of Chilly Billy. The late-night horror, fantasy, science fiction movie show started in 1964. Unlike most horror show hosts, Chilly Billy didn’t wear any scary make up or costumes (but sometimes maybe a flashy tuxedo). He would start the show by lighting up a cigarette and end it with his signature signoff “Good Night and Sleep Warm.”

I didn’t always make it up for the 11:30 p.m. start and rarely made it to the end of the second movie, but like his wrestling commentating, Bill could put over a less-than-stellar movie and make you watch.

After Saturday Night Live forced the show to move to a 1 a.m. start time I would rarely see it before it left the air in 1983 — though I had a few very late Saturday nights while in college passing out in front of the TV to Chilly Billy. Joe Flaherty on Second City TV paid homage to Chilly Billy with his Count Floyd character.

While Cardille also was the announcer for the WWWF TV show from 1969 through the early 1970s, it is his time as host of Studio Wrestling in Pittsburgh that is what most wrestling fans remember him for.

He was a class act, a true professional and an entertainer. He made bad matches watchable and talk you into watching a bad horror movie at midnight.

Bill Cardille is now somewhere with Ringside Rosie, Waldo von Erich and Norman the Castle Keeper (one of his Chiller Theatre sidekicks).

Chilly Billy, we will miss you.