BUFFALO, NY — Last week I was watching my children participate in their swim team practice when one of the other parents, who was restlessly watching lap after lap, struck up a conversation with me. After some small talk I threw out that I write about wrestling and to my surprise the parent was a reader of SLAM! Wrestling. With that the other parent said, “I like wrestling but don’t watch WWE anymore.”

I quickly replied, “I don’t watch it either.”

The look of surprise from that parent was priceless. I went on to explain how I can write about something and yet only watch the WWE when a big show rolls around. The reasons are simple, storytelling, the belief that anything can happen, and a variety of strong antagonists and protagonists that could win at any moment must be present to make me watch. A few promotions still have those qualities. 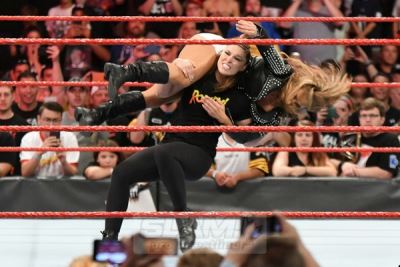 Ronda Rousey takes out Mickie James before getting to Alexa Bliss on Monday night. Photo by Joe Hrycych, www.hrycychphotography.com

Monday night, I attended WWE’s RAW in Buffalo, at the KeyBank Center, and I was consistently reminded of why I don’t watch its main roster product very often. When you start your show with your main authority figure stripping the champion of the title, for very legitimate reasons, and then back down and then let him defend it six weeks later, well, it’s weak. If I ran my life like that it would be a mess. It was weak-kneed and the storyline possibilities were there to welcome Brock Lesnar back in at a later date.

Then a potpourri of WWE wrestlers enter to the ring to tell the GM that they should face the champ. That was a lame whine fest. Why couldn’t Finn Balor just say, “I never lost the title; I was hurt and thus I deserve the title shot.”Not sure the other wrestlers would have slunk to the back, but that could have made sense.

I have stuck up for Roman Reigns for many years to wrestling fans. Reigns has a great look, I would say, or he is an emerging star, or he has a connection with women and children. The honeymoon is over. Women, children and men are done with Reigns. The turn in the crowd over the last two years has been clear and cutting. How does pumping your fist make it a better punch?

Also, if a wrestler punches a person in the head multiple times and then their opponent can just come back and put a cool move on them what does that prove? It proves that the wrestler is a lame puncher. Perhaps referees should enforce the no punch rule. I know what punches feel like, so when a super fit athlete punches someone in the head and it has no effect it is unrealistic. The fans still want to believe.

Tonight we had two tag team matches, one on the pre-show and the other on the main show that had the exact same finish. Who are the producers for those matches? Talk about a lack of creativity. If you are out of ideas perhaps you should watch some YouTube videos with the search term tag team finishes.

What did I like? I liked the women’s matches. The two matches that featured female participants made sense and built up contenders for the title as well as advanced subtle storylines. Even Alexa Bliss and Ronda Rousey continued to turn up the heat on their rivalry a degree at a time. I can even envision the two of them headlining a big name show because the fans will be clamouring to see Bliss get a beating and no one would be able to follow them.

I know I sound very negative and I feel very negative. Take a look at Titus O’Neil; he is a hulk of a man who has an impressive athletic pedigree. The guy gets beat down in seconds? Perhaps the WWE needs to invest in jobbers so their mid-card superstars can have the illusion of being a title threat at any minute.

Just over two years ago, I watched Bobby Roode and Eric Young battle it out in Niagara Falls, Ontario. Roode was so dynamic and, paired with Young, they had the crowd going on an emotional roller coaster. Tonight I saw Ziggler, who is amazingly athletically gifted, put on a match with Roode that was slow and no fun. What happened to Roode? The crowd liked the entrance but fell asleep once the bell rang. It takes two to tango. It seemed as if they just wanted to be safe and do as little as possible. These two guys are far better than what they put on.

Where was Kevin Owens? Is he alive?

I do watch wrestling but my tastes have changed. I watch local shows like Crossfire Wrestling or Empire State Wrestling and love the passion and creativity of the athletes. Also, I watch Ring of Honor and Lucha Underground. Ring of Honor is a constantly evolving show of wrestlers who are honing their craft, are willing to try new things and you can feel their joy of performing come right through the television screen.

Lucha Underground is a whole other beast that captivates the audience with storytelling that is part fairy tale and part contest but it all makes sense in the context. Those athletes delve deep into their characters and make the viewer believe in them, not to mention the top notch commentating that moves the story along.

The WWE seems to lack the soul and story of these two smaller promotions. I keep waiting for better from WWE’s RAW but I just keep running back to ROH and Lucha Underground. I want to love you WWE, why won’t you let me?