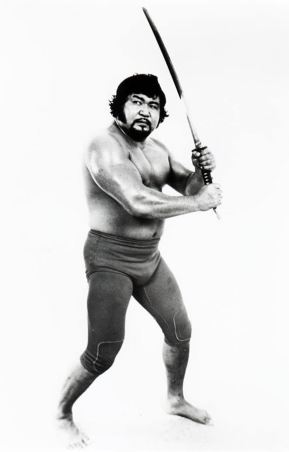 When Masa Saito was inducted into the George Tragos/Lou Thesz Professional Wrestling Hall of Fame in July 2008, he apologized for being so mean. “I would like to say here, to American wrestlers, I am sorry to hurt you,” said the former Olympic wrestler, who died on July 14.

At that event in Waterloo, Iowa, Saito was accompanied by his wife, Michi, who acted as his translator. It was evident that Saito had a lot of appreciation for his time in North America, as a solid mid-card to main event star wherever he went.

“Mr. Saito” was inducted into the Wrestling Observer Hall of Fame in 2009, and in his write-up, Dave Meltzer said that “no legitimate Japanese wrestler had as much enduring stardom in the United States as Masa Saito,” but that it was “his standing and respect in Japan” that resulted in his induction.

It hadn’t been revealed at the time, but Saito would eventually face down a much tougher foe in Parkinson’s Disease, and reports indicate that it played a role in his passing.

Masanori Saito was born on August 17, 1942, and grew up in the Nakano section of Tokyo. At Meiji University, he was a stand-out amateur wrestler, and competed in 1963’s All Japan college championships is both the freestyle and Greco-Roman disciplines.

With the 1964 Summer Olympics in Tokyo, Saito gained much fame representing his country in the freestyle wrestling. He competed at 216 pounds, on his 5-foot-10 frame, and finished seventh. 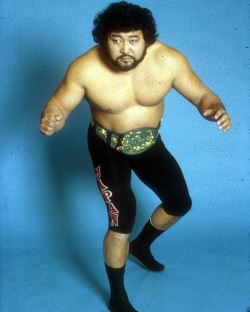 Mr. Saito as a champion. Courtesy of the Wrestling Revue Archives: www.wrestlingrevue.com

Saito bulked up and became a solid performer, wrestling professionally for 35 years. At various times, he was falsely billed as a medal-winner at the Olympics, and the year of his participation changed too so he didn’t seem so old.

While he held numerous singles titles, including the AWA World title at the age of 47, he was generally known as a tag team worker in North America, holding 19 major tag team titles during his career. One frequent partner was Kinji Shibuya, who was billed as his cousin.

Saito went to WWF in 1981 to team with Mr. Fuji and won the WWF tag team titles on two occasions.

“We got along pretty good. I met him in ’76 in San Francisco, when I was the United States champion. He wanted to go to New York,” recalled Fuji a few years back. All together, they teamed for three years. 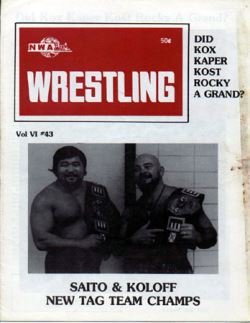 In his autobiography, former NWA World champ Jack Brisco talked about wrestling Saito. “I enjoyed working with Saito. He had started as a professional about the same time I did. His first name was Masanori, but I don’t think he ever used it in the ring. It was always, Saito or Mr. Saito. He had quite an amateur record in Japan and had represented his country in the 1964 Olympics in Tokyo. At six feet and 250 pounds he was a good worker and a great heel to play to my baby-face role.”

The biggest publicity that Saito got in the U.S. came in May 1984, when he and Ken Patera (another Olympian), were convicted and sent to prison after a big brawl with police officers outside a McDonald’s in Waukesha, Wisc. “It took 18 officers to finally subdue Patera and Saito. Ten of the officers were seriously injured, six by Saito and four by Patera, including a female officer who suffered a broken leg and had to retire from police work,” wrote Meltzer. In a jury trial that gained a lot of local attention, both men were convicted and spent two years in prison.”