PITTSBURGH – All fans of sports entertainment in Pittsburgh were abuzz Sunday when it became apparent that Hulk Hogan was on the verge of making a return to the WWE. It started with social media posts of the 2005 Hall of Famer riding a plane to Cleveland with no scheduled destination. Reports indicated that he had no public appearances in the Steel Belt town, and others indicated that Jimmy Hart was also traveling to Cleveland. Hogan himself previously posted a Twitter photo of his “back yard.” Astute observers noted that it wasn’t a Florida skyline. 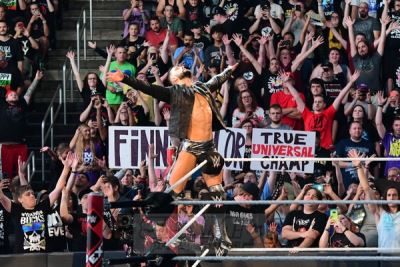 Finn Balor was one of the more popular wrestlers in Pittsburgh on Sunday night at Extreme Rules. Photos by Joe Hrycych, www.hrycychphotography.com

Record-low RAW ratings will make business-savvy professionals make timely decisions. It had been rumored that ticket sales in Pittsburgh for Extreme Rules were so slow that the upper bowl of the arena was going to be tarped off to customers. Instead, steep discounts allowed those tickets to be filled.

However, while a PPG Paints Arena crowd eagerly awaited The Hulkster’s imminent return (his presence was confirmed by wrestling news sites), they made the best of every situation. And that included recreating a Royal Rumble main event.

But first the crowd arrived Sunday night with the usual collection of fans wearing Bullet Club and Stone Cold Steve Austin “skull” t-shirts. There were even a handful of red Hulkamania shirts in the bustling crowd.

As Renee Young, Booker T and others interviewed Dolph Ziggler and Drew McIntyre, a fan dressed as a Thrift Store “Nature Boy” Paul Lee roamed the rows, wooing like Lee’s mentor Ric Flair. That fan got a bigger rise from the fans than Ziggler and McIntyre.

Before the Kickoff Show began, stage hands assembled a small display of tables on the stage. The furniture was placed to preview the Tables Match between New Day and Sanity. Interestingly, none of the participants returned to the entrance stage during the contest, and the staff removed them without consequence. 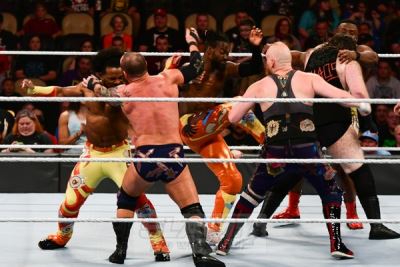 The New Day and Sanity go at it.

It should be noted that the Pittsburgh crowd is still into the New Day and enjoyed the trio’s pancakes, some of which were tossed into the suite section. They chanted for Kofi, Big E and Xavier with much glee. The late-arriving crowd may have known who Eric Young is; however, they had no interest in the rest of Sanity.

Right before the official 7:00 p.m. start, the WWE replayed (for the first time here) the memorial video for the late Bruno Sammartino. Although the Civic Arena was across the street from the current venue, the video was chilling.

Bray Wyatt and Matt Hardy’s arrival for the first match of the main show resonated with the fans. The familiarity of the two was evident. One fan dressed as Matt Hardy sat in the second row on the hard camera side of the set-up. While a thin representation, the fan made an impression and scored points for convincing hair.

The B-Team of Curtis Axel and Bo Dallas arrived, but all four men were overshadowed by the arrival of Ronda Rousey, with promised ticket in hand, at ringside. (Note: Ronda didn’t stay terribly long after that initial shot. She disappeared for a long part of the night but returned shortly before the Nia Jax/Alexa Bliss contest.) The ovation she received was the loudest so far of the evening.

Early on, a fan raised a sign that read, “Don’t Boo Roman.” It wouldn’t work.

The fans wanted Wyatt and Dallas to lock up and when Bo wouldn’t allow that to happen, the fans booed. The fans did try a “B-Team Rocks” chant but it didn’t take off like others later in the card.

When The B-Team won, the fans appreciated the title change. It became apparent throughout the night that the crowd enjoyed thinking out of the box.

Renee Young interviewed Kurt Angle and the video was shown on the big screen. When Kurt announced that he might strip Brock Lesnar of the Universal Title, the place erupted. Days of supremacy don’t matter to fans in Pittsburgh when the belt is never defended. That never worked in Sammartino’s Day, and he remains synonymous to the sport in many pockets of town. 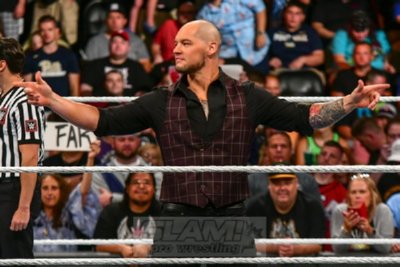 Does Baron Corbin look like a “constable” to you?

A sign indicating that Finn Balor was the “True Universal Champion” was prominent when his match with Constable Baron Corbin was up. Corbin made RAW ring announcer JoJo clarify that he was Stephanie McMahon’s appointed Constable. The explanation was actually apt as Corbin — as one fan loudly pointed out — that he is dressed more like a bartender than an arbiter of justice.

The fans switched from “Let’s Go Balor” chants to “Corbin Sucks.” When Balor succeeded with a small package roll up, the fans loved the win. 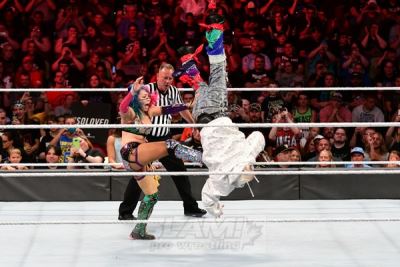 The applause for Asuka was good, the reaction for Carmella and James Ellsworth was unimpressive. Ellsworth performed for years in Western Pennsylvania as “Jimmy Dream” and returned to the independent scene following his earlier WWE departure. It was surprising that the fans didn’t react to him more. He did entertain while trapped in the shark cage, and even more so when he found himself hanging from the steel structure. Fans booed when staffers tried to free him. 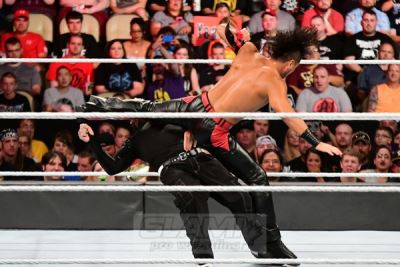 When the United States championship match was announced, some fans sang Shinsuke Nakamura’s old theme. The response for Hardy was average, as most fans seem to like him. When Nakamura went low on Hardy and then immediately kicked him in the face for the win after the bell, the fans in attendance applauded. It was something interesting, never mind the fact that they booed the Royal Rumble winner mere moments prior.

After Randy Orton returned, fans sprung to their feet. That was the largest ovation of the night. The showdown that resulted in Orton ignoring Shinsuke and turning of Jeff Hardy didn’t come as a complete surprise.

The Steel Cage match was next. The fans were largely into Braun Strowman. The “Get These Hands” chant was loud. When Strowman and Kevin Owens stood on the top of the structure, it seemed surreal. When Strowman tossed Owens onto the announce table from the top, the PPG Paints Arena was reminded of the Mick Foley/Undertaker Hell in a Cell match that occurred 20 years ago. In fact, Foley was in town a few weeks ago with a comedy/storytelling show dedicated to that historic occasion.

Earlier in the night the Bludgeon Brothers attacked Daniel Bryan and Kane. When the match started, there was no pretense of Kane missing the contest. It was simply Bryan versus Erik Rowan and Luke Harper. After a beat down on Bryan, Kane emerged limping in the biggest boot ever created. The seemingly one-and-done match ended without ado. It is interesting that the response for Bryan at the 2014 Royal Rumble in the same building was by and away the loudest of the event. The “Yes” arrival chants didn’t really surpass anyone else in 2018.

The Miz did not return to spoil the match, as some rumors indicated.

Roman Reigns ran into the B-Team back stage. The boos for the former Shield member was deafening. When he came to the ring, the boos were the most heaty of the event. The response for Bobby Lashley was non-existent. There was an undercurrent of malaise to Lashley. A loose beach ball had more fan support. However, when Lashley was victorious, the ovation was more than one might imagine.

The biggest reactions to the Nia Jax/Alexa Bliss contest were for the inevitable run-in by Ronda Rousey.

The Rusev/AJ Styles match might have been the best on the card. The Rusev Day chants were fairly prominent and started often. Rusev received big pops for big moves. When AJ won, the crowd erupted in support. 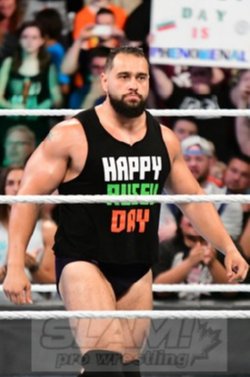 The 30-minute Iron Man Match between Seth Rollins and Dolph Ziggler was quickly overtaken by the Royal Rumble countdown and vocal entrance bell every minute. The day-after-Wrestlemania crowd has earned a reputation for being contrarian. Despite where the show originates, the fans chant nonsense, sing and provide other odd moments. The Pittsburgh crowd counted down from 10 seconds each and every moment until graphic masters took the clock from the big screen and then the hanging screens in the center of the arena. When the official clock disappeared, fans chanted “Where’s the Clock” and then ultimately decided to make their own countdown with ever-loudening entrance bell sounds.

The “Phantom Clock” practice was immediately hysterical. When the clock suddenly returned with 9:40 ticking, the fans answered with a rousing “Yes” chant. They followed it up with “Let’s Go Rollins.” At 7:10 left, the fans—in unison—stopped cheering for Rollins and counted down to zero.

When the match ended in a tie, hometown hero Kurt Angle (who arrival was met with an explosion of approval) announced that a sudden death overtime would take place. When Ziggler quickly won, it didn’t matter. Everyone knew that Hulk Hogan was in the building, and they were ticked that he didn’t make an appearance.